“You ask the questions and we give you the answers…”

was a 30 minute magazine style show that answered questions from children with experiments, interviews demonstrations and visits to places like factories, farms and museums. It screened across Australia on Channel Nine, Win Television or NBN at 4pm each weekday. 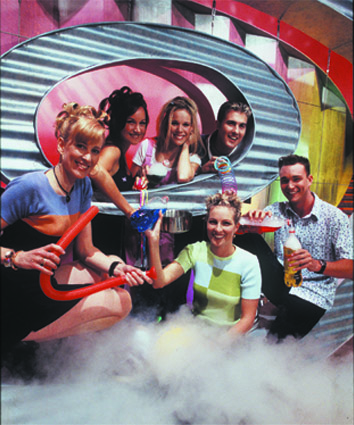 The Team at Y? for series 1 (From Left, cw) Joanne, Lisa, Alanna, Brad, Joseph and Lizzie!

Joanne Nova hosted the first series, doing over 400 experiments during 65 episodes, covering everything from why cutting onions can make you cry to hammering in nails with a solid frozen banana.

Other hands-on demonstrations included making solar ovens out of cardboard boxes, rockets out of plastic bottles, musical instruments from straws, and slime from cornflour.

In between experiments, roving reporters answered questions about things that were too big to bring into the studio, like hot-air balloons and ice-skating rinks.

Joanne wrote a book with all her favourite tricks from Y? Click the book to find out more.

Y? is no longer in production. Repeats are still shown on Nine occasionally. The first series that Joanne hosted screened in early 2000. Joanne and Alana handed the job over to David and Tara for series 2 onwards.