So sayth Roger Simon at the Epoch Times.

Did you ever wonder what it’s like to live in a one-party state?

Well, wonder no more. You’re living in one.

As a business plan, chucking off half the nation may not work so well?

Censorship just got racked up to Defcon 2.0. It’s bad and it’s going to get worse. The good news is, the Left overplay their hands.

Twitter has permanently banned The President of the United States, as well as Sidney Powell, Michael Flynn, and Lin Wood. In reply, Rush Limbaugh deactivated his Twitter Account. Limbaugh had has 88 million followers on twitter and has 35 million listeners on his radio show. But the purge is sweeping, Facebook already banned Trump “indefinitely”. Not only that but Facebook has been going after conservative groups too.  Steve Bannon’s podcast was also shuttered by YouTube over “false 2020 election claims”.

In response there will be an exodus to other platforms like Parler. In preparation for that Apple and the Google Playstore both told Parler it must obey their rules or it will be delisted. But what does this say about Apple? They spent a lot of money advertising their strong privacy policy. This blows that away and marks Apple as an activist tool of the left wing. How confident are you now that Apple won’t use your iphone messages against you “for the national good”, etc?

It’s looking like only the three or four people with phones outside the two giants will be allowed (and for how long) to get social media messages from the current US President. Is anyone still wondering if this is a Coup?

Glenn Reynolds says:  “This does seem like a good way to re-unify the Republican Party, though.” There is that.

As it happens, Donald Trumps popularity rose after the Capitol hill protest:

A source close to the polling firm tells Newsmax that the rolling survey saw Trump’s approval soar to 51% on Thursday night. Trump’s approval has been up overall, jumping from 45% just before Christmas. “Americans are disgusted that cities burned for months and Washington and the media did nothing,” our source says, “But they still like Trump.”

The Tech Giants have monopolies to wreck, and the sooner the better. Has there ever been a better reason to look at their competitors? President Donald Trump responded to Twitter’s move to permanently suspend his account from its platform late Friday, condemning the big tech giant and saying that it does not stand for free speech.

The president also said he anticipates a “big announcement” soon and that his team is negotiating with other sites and is also looking at building a separate platform.

“As I have been saying for a long time, Twitter has gone further and further in banning free speech, and tonight, Twitter employees have coordinated with the Democrats and the Radical Left in removing my account from their platform, to silence me—and YOU, the 75,000,000 great patriots who voted for me,” Trump said in a statement.

“Twitter may be a private company, but without the government’s gift of Section 230 they would not exist for long,” he added.

“I predicted this would happen. We have been negotiating with various other sites, and will have a big announcement soon, while we also look at the possibilities of building out our own platform in the near future. We will not be SILENCED!” he said.

For the record, these were the two tweets that Twitter deemed to be “glorifying violence”.

They are not even trying: 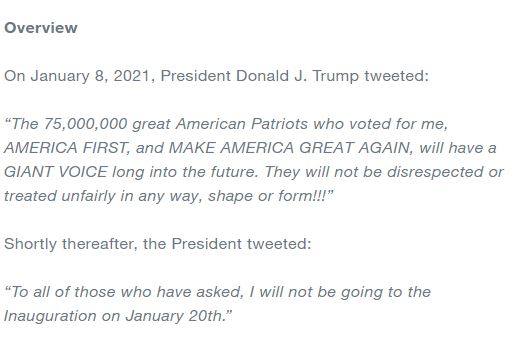 Twitter says Blah blah blah. They might as well say, Trump used English, therefore we have to hide him:

Add this to your dictionary: American Patriot means people who support violent acts?  GIANT VOICE means “there will not be an orderly transition”.

This determination is based on a number of factors, including:

Unforgiveably, Trump is not attending the inauguration, sob, sob. He is not bowing to their egos, and thus is inciting disobedience.

There is a site publishing his deleted tweets.