How much have we lost in the last month?

Until a week ago there was something slightly sacred about post marks– it was a legal document, a historical record of the day. Something we could rely on. In a small way, USPS represents The United States: all decent nations have decent postage systems. All crooked banana republics don’t.

Then we found out some US Postal Workers were told to backdate stamps. It may not seem like much compared to losing the right to free and fair elections. But on any normal day, this is a big deal.

Everyone understands what a backdated post mark means. This story is an easy point to share with victims-of-gaslighting. “Did you know there are multiple reports in at least two states where postal workers have been told to stamp ballots with false dates?” “Don’t you think the media ought to mention this?” 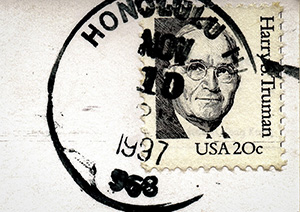 It used to mean something  |.. Image Urbanvibe14

In Pennsylvania Richard Hopkins, a postal worker, says that he heard one worker getting in trouble for accidentally datestamping one ballot envelope  with the correct date — Nov 4 — when it should have been Nov 3. They has postdated all the other ballots picked up that day for Nov 3rd, thus laundering illegal votes and ensuring they would be counted.

He said  “I’m nervous. I am nervous because this is a big deal.” But he is willing to testify before Congress.

Hopkins did the original interview anonymously, but at work he was implicated as the one who had spoken up. They called him in to “bring up old problems” and ask questions. Then they told him to he was placed on unpaid leave. And now he’s been hauled into the U.S. Postal Service Office of Inspector General, quizzed and coerced without a lawyer, until he signed an affadavit that was so weak, the Washington Post generated a Fake News headline saying  he had recanted.

Richard Hopkins says he did no such thing. And since he was wearing a wire, he has a record to back him up.

““I am right at this very moment looking at an article written by the Washington Post. It says that I fabricated the allegations of ballot tampering,” Mr. Hopkins said in a video posted on Twitter. “I am here to say that I did not recant my statements. That did not happen. That is not what happened.””

A fundraiser was set up for Richard Hopkins at GoFundMe, because he’s done the right thing and is being punished for it. But for no good reason GoFundMe shut down the account and issued refunds. Undeterred he has started a new fundraiser on GiveSendGo.

Hopkins deserves to be supported by every patriotic American.

The liars and the corrupt cannot win this battle. The truth must prevail.

You can donate to Hopkins HERE.

A second post worker has also come forward. The postmaster told workers to keep ballots collected on Nov 4th separate from the other mail.

There are others in Pennsylvania,  Michigan:

O’Keefe said, “The new postal whistleblower’s testimony to us further confirms that post offices in different parts of the country are systematically sorting off late-ballots, so they would be eligible for counting.”

The Erie-based postal worker’s account lines up with the testimony of a postal worker from Traverse City, Michigan.

The Michigan USPS whistleblower said Wednesday there was a process set up for the post office workers involved in the bogus postmark scheme.

Presumably those who did backdate stamps don’t want to risk coming forward. It is illegal.

Think about the ugly choice all these workers had — to keep their jobs they had to break the law. Now some of them must be worried they might get caught.