Tax auditors use Benfords Law to detect fraud. They look at the first digits of the income data and figure out how often the different digits pop up. If the deposits are random we’d see lots of one’s, and less of every other number in an ordered pattern.  Two would be the second most likely, three the third…. and so on down to nine. If there were lots of sevens, say, the Tax Auditor will start hunting there.

So if precincts call in ballot results there is a certain pattern we would expect them to arrive at, and that’s the pattern we see for every candidate, … except Joe R.Biden and Kamala D. Harris.

For some reason their results in Chicago, Milwalkee, and Allegheny were all clumpier, with 2, 3 or even 5 being among the most common for ballot results? Soon someone (or 500 people) will test out and see if Biden and Harris voters were clumpier in all districts or just the states that mattered to the Democrats.

You don’t need a Stats degree, just look at the graphs.

Credit to Smoking Gun of Democrat Cheating, by vbmoneyspender. Thanks to graphs by ‘cjph8914’ on Github. And explained in a twitter thread by StatsguyPhD  who notes the respective p-values in their 16 digit glory:

So Joe Biden needs to come up with some convincing reasons about why these clumpy voter numbers group the way they do. Readers may want to help them below by dreaming up the best excuses they can think of to explain these patterns.

Do Democrat voters in Chicago vote in class sizes of 30? 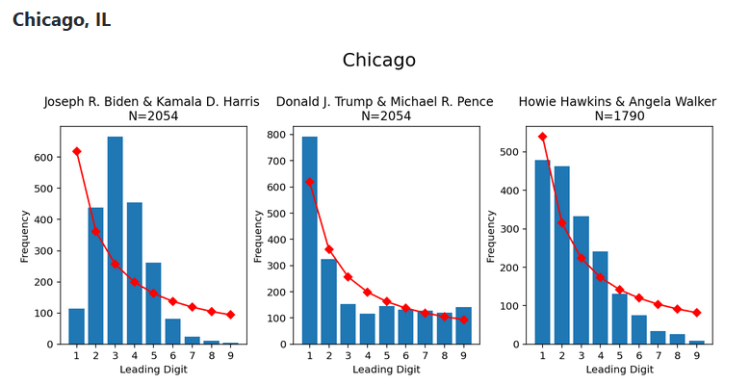 Or do these clusters leave the signature mark of the sizes of the packets handed out by the head honcho of vote riggers?

Statsguyphd posts all his code and thoughts here.