The Snowy 2.0 Scheme is a $10 billion bandaid to make up for Wind and Solar’s unreliability. Hydro storage is an anti-generator that destroys 20-30% of the electricity fed into it. It turns out it also destroys three quarters of the money fed into it, and some of the environment as well. What’s not to like? 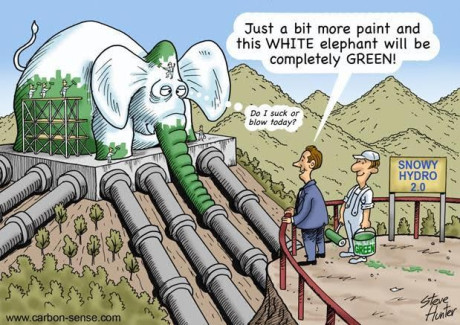 Today a Who’s Who of Australian engineering are scathing about Snowy 2.0 in The Australian

The mammoth pumped Hydro scheme is a $10 billion dollar disaster that will never pay for itself, is already being superceded by battery technology, and will scar the land, infect pristine alpine lakes, risk critically endangered species, damage fishing grounds, and breach the Biosecurity Act in a National park. (Where are the environmentalists, Tim Flannery? Does anyone care?)

Pumped Hydro doesn’t even work on a small scale. Projects like it are being junked around the country before they get built and there has been only one other pumped hydro project “committed” in the last 20 years.

On the revenue side, the output of Snowy 2.0 from 2025 to 2042 is now forecast to be less than half the business case estimate, according to the Australian Energy Market Operator. AEMO forecasts Snowy 2.0 to be largely idle before 2033, as the existing 1800 megawatt Tumut 3 pumped hydro station can provide most of the forecast output from both stations until then. Also, AEMO forecasts Snowy 2.0 would never attain the maximum annual output estimate in the business case.

Not only has output been over-estimated by 100 per cent, Snowy 2.0 is not urgent or critical for the transition to renewable energy, nor itself “renewable”.

On the cost side, the business case estimate of $3.8bn to $4.5bn is understated, also by about 100 per cent. … Once all costs are added, including the associated transmission lines, we predict the total to be in the vicinity of $10bn.

It is now clear that Snowy 2.0 will never pay for itself. Analysis by the Victoria Energy Policy Centre finds that even Snowy Hydro’s inflated revenue projection will cover only a quarter of the capital cost.

Origin Energy was planning to spend $250 million building a extra 235MW of pumped hydro in Kangaroo Valley. But costs have risen to $600 million and just a few weeks ago they pulled the pin unable to justify the investment. Origin notes that the capital costs were 15-20 times the forescast annual revenue.

The AEMO estimates we will need up to 19 vast gigawatts of reliable back up in the next 20 years. But government policies have made reliable energy uncompetitive — to the point where no one can justify spending money to build it as a part-time second fiddle to the green hallowed random electrons produced by the sacred weather-changing unreliables. 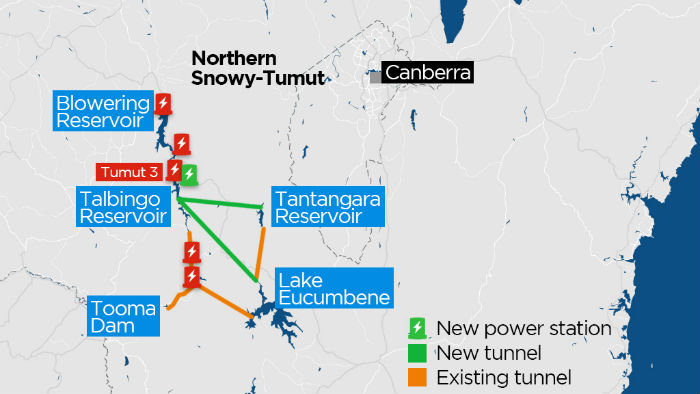 Tantangara is the high pristine reservoir. Talbingo is the lower, infected, pest laden water which by definition must be pumped up into the top reservoir.

Batteries may be cheaper than Snowy 2.0 but Unreliables-plus-batteries are not as cheap as good old coal:

Everyone is missing the point in the debate about batteries versus pumped hydro:

Those old brown coal reliables in Victoria settled their market bids at bargain basement prices like $10 – $20 per megawatt hour in 2017. But Murray Hydro settlement costs were $44 – $122 per megawatt hour. So even hydro that runs with the help of totally free water pumping thanks to rain and Mother Nature is not remotely competitive against brown coal. How’s that supposed to work if they have to buy electricity to push water uphill, and pay for the tunnels and transmission lines as well?

Let’s destroy the environment to save it

The financial and technical flaws of Snowy 2.0 are reason enough to halt the project. An equally compelling reason is the recently revealed magnitude of damage to Kosciuszko National Park. The bulldozed moonscape scar along 5km of the Yarran­gobilly River at the Lobs Hole construction site is already visible on satellite images. Much more is to be destroyed across 35km of the park. Most of the 20 million tonnes of excavated spoil is now to be dumped on parkland rather than in the reservoirs.

Your governments have conceded the inevitability of pest fish and pathogens being transferred from Talbingo Reservoir to Tantangara Reservoir and then throughout the Snowy Mountains and downstream rivers (Murrumbidgee, Murray, Snowy, Tumut).

… it is now evident that the NSW government has no option but to grant exemptions to its own biosecurity protections to “legitimise” the spreading of declared noxious pests, throughout a national park no less, and beyond — this will be unprecedented.

The Snowy Hydro 2.0 proposal has “money” written all over it.

Some of the names on this letter:

But even the renewables fan club hate Snowy 2.0 as well:
What’s interesting is the number of die-hard renewables advocates who think this is a bridge too far.
Who loves it? Malcolm Turnbull, the Member for Goldman Sachs, and the Snowy Mountain Hydro corporation, who turned into an instant renewables cheer squad the moment the first unreliable generators needed hydro back up.

In 2003 Tim Flannery called the original Snow Hydro Scheme a “lie … that did untold damage to our river system for the sake of white immigration.”. Where is he on Snowy 2.0? Crickets.

The cost of “storage” and frequency stability was zero in our old pre-renewables grid. The new hydro battery scheme costing $10,000 million is entirely a renewable energy charge. Wind and solar drive up the price of everything around them. When will we start adding that cost to the estimates of adding new solar and wind power?

Even this white elephant isn’t big enough for a 100% renewables future:
Roger Andrews at Energy Matters details the pitiful contribution Snowy 2.0 would make to shore up the unreliable nightmare of our renewables future.
To support a 100% renewable electricity sector Australia will need approximately 10 terawatt-hours of long-term energy storage. The multi-billion-dollar Snowy 2.0 pumped hydro project will supply only 0.35 terawatt-hours, a small fraction of this, and conventional pumped hydro potential elsewhere in Australia, including Tasmania, will not fill the gap.
The only world Pumped Hydro makes sense in, is one where we all pay the rorted high prices that South Australia does while we pray to the God of CO2 to stop the storms and put out the fires of unmanaged forests.
9.5 out of 10 based on 74 ratings