Ken Stewart has been looking at the mysterious pattern of temperatures on Horn Island –– right at the top of Cape York Australia. It’s almost as far north as things get in Australia. There was no thermometer there before 1995, so the Bureau of Meteorology has rattled the nearest tea-leaves to find out how warm it was.

The towns listed on the map are its nearest neighbours. “Near”, in the Australian sense, meaning loosely within  500 kilometers.

This, below,  is the way 70 years of temperature dregs roll at all those sites. 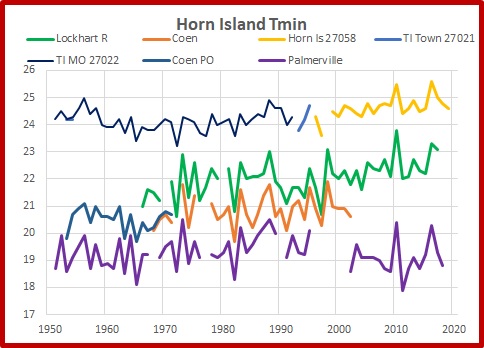 This is what the Bureau of Meteorology sees (note the scale has changed on the temp axis). That’s two degrees of warming in far north Queensland. 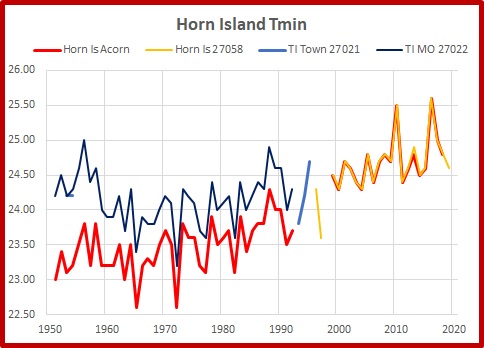 So the average minimum temperature now looks half a degree cooler in 1960 than what your lying eyeballs suggest.

Ken goes into much more detail and deserves our thanks for bothering to try to unpack the mysterious merging of thermometer records in at the BoM department of Tasseomancy.

Visit his site:  Garbage In, Garbage Out- Horn Island