The first case of a definitive reinfection was reported today

A 33 year old man in Hong Kong was tested positive nearly five months after his first infection, and with a slightly different variant of the virus, so it’s very likely this was a second infection rather than a resurgence of the first.  It hints that Covid may be a bit like the common cold, and our immunity may be partial and temporary which is not good news for the herd immunity idea and the vaccine plan, but it’s only one case. On the plus side,  he had a three day fever, cough and sickness in March, but is asymptomatic this time, suggesting that maybe there is enough residual immunity to help him beat the second infection.

There have been other reports of people getting reinfected but none of the previous cases had genetic testing of both infections to show they were different.  But 13% of 4,000 doctors who were surveyed in May (even at that early stage) believed that at least one of their patients had been reinfected, so it is not that rare.

UPDATE: Already today two other cases of reinfection have also turned up in Belgium and the Netherlands. More coming soon…

Predictably, vaccine makers are rushing to say that these are not unexpected and probably don’t matter, but other researchers are more concerned. Vaccines are less likely to work for long if our immune systems can’t achieve it with a natural infection.

How about Herd Immunity?

Keep in mind we don’t know if the second-timer in Hong Kong was infectious this time. His immunity may have helped him feel better, (or it could be that his Vitamin D level was higher in summer) but he may still be able to infect others. This makes all the difference. If people can still reinfect vulnerable family members their immunity is not protecting the herd. Some people are hoping that Herd Immunity may be reached at 20% infected but an asymptomatic infection is not the same as immunity. Asymptomatic people shed just as much virus as symptomatic people. (Seungjae Lee et al) The whole point of herd immunity is the kind of immunity that stops the spread of the virus.

After mild Covid-19 infections antibodies seem to fade fairly quickly, with a half life of 73 days. But could that protection be hiding in T cells, rather than antibodies?

T cells are the deep controllers of white blood cells, and in one of their many roles, they activate the B cells that make the antibodies. Normally we test for antibodies to see if people have immunity because that’s the cheapest way to tell if the whole army of immune cells knows what to look for. A fully fledged antibody response is a mature, armed-and-ready response. It is usually assumed that if we don’t have antibodies we don’t have protection.

A flurry of studies have dug deeper and are finding that it’s possible to have T-cells specific to virus without having any detectable antibodies to it. Antibodies are like small sentinels and look outs, sweeping our mucosal surfaces and blood for threats. They offer fast protection, ready to raise the alarm. T-cells, perhaps are the Colonels and Generals as well as the SAS. They can get activated within hours. Albeit, hours can matter with exponential invaders.

Can common colds and T-cell memories give us protection? Maybe.

One fifth of all our colds are coronaviruses. People are estimated to get a coronavirus cold on average every two to three years. Protective antibodies wane between colds, but cellular (T cell) immunity “could remain”. People appear to get less severe infections after the initial rounds.

Sette and Crotty reviewed five studies on T-cells that showed that between 10 and 50% of people who have never been exposed to Coronavirus nonetheless carry T-cells that recognise parts of the SARS-Cov-2 virus.

It’s possible that T-cell recognition is useful and gives us a head start, but the authors warn that it might be good, irrelevant or even a bad thing. If the  antibodies are aimed at the wrong parts of the virus they may send the immune system out on a dead end path. That’s the ‘original antigenic sin’. Think of a distracted army aiming for the wrong target. It’s also possible that the antibodies themselves are a pest, clogging up the works, or worse — even helping the dang virus get inside immune cells themselves  (known as ADE) thus making the infection worse. (It is known to happen in Dengue, Zika, Ebola and with some Coronaviruses).

It is frequently assumed that pre-existing T cell memory against SARS-CoV-2 might be either beneficial or irrelevant. However, there is also the possibility that pre-existing immunity might actually be detrimental, through mechanisms such as ‘original antigenic sin’ (the propensity to elicit potentially inferior immune responses owing to pre-existing immune memory to a related pathogen), or through antibody-mediated disease enhancement. [ADE] While there is no direct evidence to support these outcomes, they must be considered. A detrimental effect linked to pre-existing immunity is eminently testable and would be revealed by the same COVID-19 cohort and vaccine studies proposed above. — Sette and Crotty.

It is a war out there.

We already knew around 45% of the population don’t seem to get any symptoms to Covid-19, so they are protected (from symptoms at least, though half show signs of lung damage).  That may be because of their T-Cells, but it may not. Asymptomatic infections may occur because the initial viral load was low (masks help), or because they had a lower expression of ACE2,  or higher Vitamin D levels, or high NK (Natural Killer cell) activity. It may be better cytokine production. And it may be something else entirely.

T-cells are mostly targeting the side of the spike, not the active end

Stick with me. We can learn a lot from Braun et al. They looked at which parts of the virus the T cells were reacting to, which matters. As we already know survivors seem to have more antibodies against the spike – not against the nucleocapsid shell.

Braun et al used 68 blood samples taken before the epidemic.They exposed their stored blood to the novel virus for 16 hours and found that 24 of the 68 samples proved to have T-cells that reacted in some way to the Coronavirus that they had never come across before.  So 35% had some immune recognition. These are probably left over units from past battles with two of the common cold coronaviruses. We even know which two coronavirus common colds, namely 229E and OC43, are the top candidates because they have a few short amino acid sequences that are identical to sequences on the spikes on Covid viruses.

To figure out what the Tcells were aiming at, the researchers split the spike into S1 and S2 zones. But most of the T cells were reacting to the S2 part, and only 6% of the total sample carried T-cells that recognised the S1 part — which is probably the most important part as it  contains the RBD (Receptor Binding Domain) at the active end of the spike — that’s the zinger hot spot that sticks to our ACE2 receptors.

Could it be that sickest patients were extra sick because they are not targeting the S1 area? Perhaps their immune systems were aiming at the wrong part of the spike? It’s not clear that T cells against the S2 area will help. This may be the antigenic sin Sette referred to, though Sette reviewed the Braun et al paper but did not comment on the S1 and S2 ratio.

The Braun et al paper was hard work to decipher. This diagram from Meirson et al helped explain what was going on.  (My explanation of what this means is below). 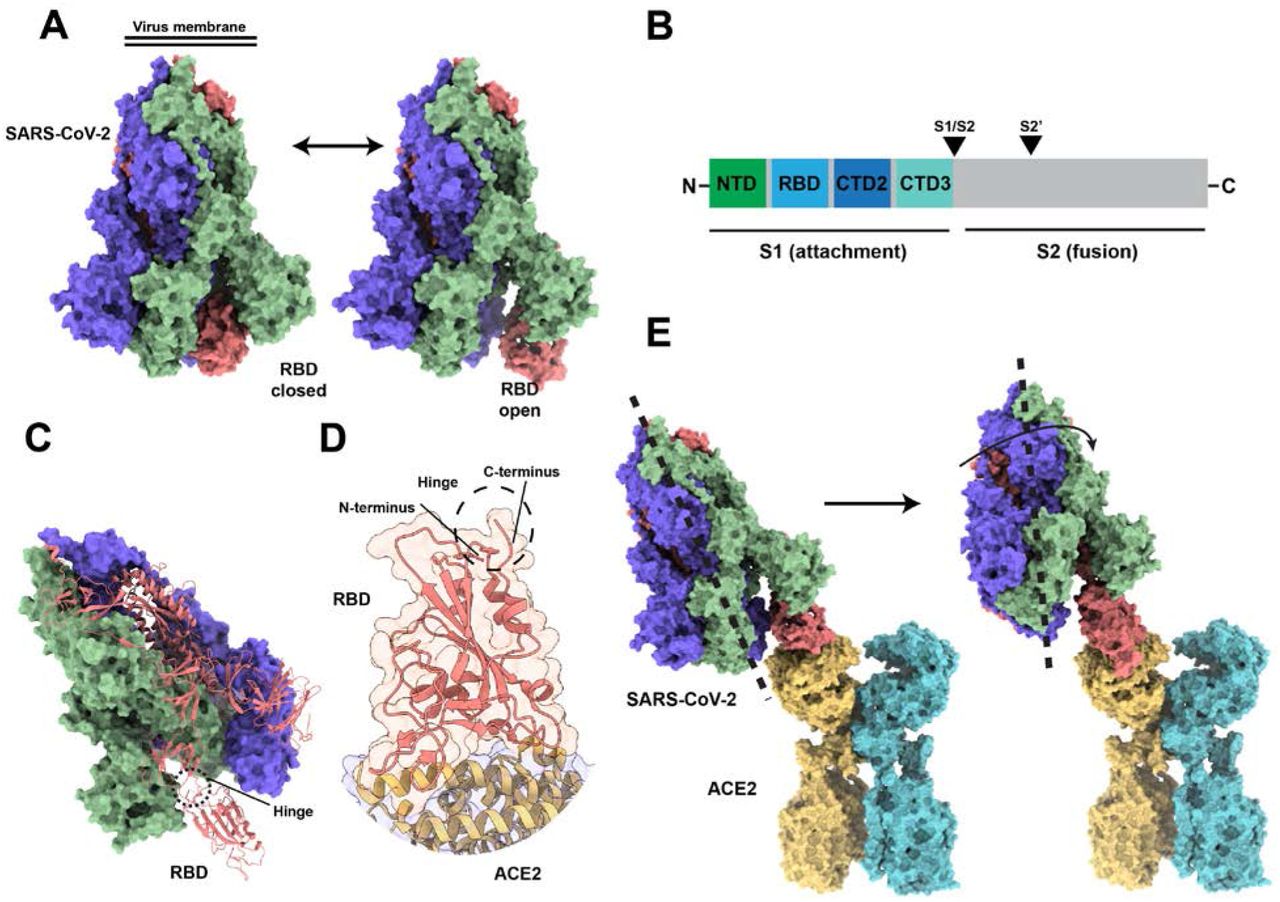 Deciphering the spike picture above:

A/ Shows the spike in an open and closed form. The RBD means Receptor Binding Domain. That is the key spot that sticks to the ACE2 receptor. Obviously we don’t want that to happen. The “key” that clamps onto our cells is a way to open the door.

B/ Shows the genetic map. One spike is made of three repeats of this code string. The RBD is on the first part of the coding string (which the researchers call S1). Looking at picture D, we see that the N terminal end starts near the virus membrane then reaches out along the spike to the important RBD. Then the string folds back on itself so that the C terminal ends up close to the starting point.  The middle of the string sticks out on spike.

C/ One of the spike sections hinges open.

D/ The skeleton of the long string molecules, plus the ACE2 molecule the spike sticks too. Everything in biology is done in strings — that’s how they are read from the code.

The spike proteins are quite different in the different coronaviruses, but there are a few common sections and some people have antibodies to parts on what is called the C-terminal. The question that matters — are these T-Cells that recognise this part of the spike useful in preventing a bad disease. Do they neutralize the virus, or just clog up our antibody tests?

Here’s another image below, a bit like the one above.  The skinny part of the spike is connected to the virus. The fat part is seeking out your ACE2 cells and wants to clamp on them. The two orange parts are probably the most important targets of antibodies. 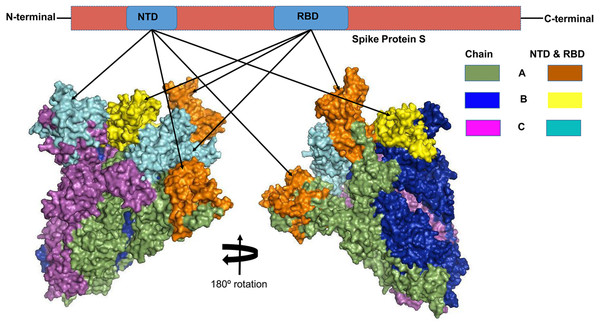 Can T-cells protect us from a bad Covid infection? Are they the reason about 45% of people appear not to get any symptoms at all? But if these T cells are useful why do so many medical workers catch Covid? Why are the ranges of T cell responses here so wide? There is the puzzle that children suffer worse colds, yet get better protection from Covid, though have at least as much virus in their noses and throats.

Will people with reinfections of Covid shed less virus than the first time?

The biological role of pre-existing SARS-CoV-2 S-cross-reactive CD4+ T cells in 34% of HD remains unclear for now. However, these cells may represent the key to understanding the vastly divergent manifestations of SARS-CoV-2 disease courses, and particularly the suspected 179 high rate of asymptomatic infections in children and young adults assuming that these S-crossreactive CD4+ T cells have a protective role in SARS-CoV-2 infection. Since children and young adults have on average more frequent social contacts than the elderly, one might expect a higher transmission rate and HCoV prevalence in the former. This assumption would need to be investigated in future longitudinal studies assessing the presence of pre-existing SARS-CoV2-cross-reactive CD4+ T cells and their impact on the susceptibility to SARS-CoV-2 infcetion  and age-realted clinical outcomes of COVID-19. SARS-CoV neutralizing antibodies are associated with convalescence, and they have been detected 12 months after disease. However, the durability of neutralizing antibody responses 188 against SARS-CoV-2 currently remains unknown. Antibodies against HCoV can wane within 18 months after infection, although HCoV re-infection is accompanied by low-level and shortlived virus shedding with only mild symptoms of short duration pointing towards residual immunity…

Sette and Crotty (2020) Pre-existing immunity to SARS-Co-2: the knowns and unknowns, Nature Reviews, Immunology.  Vol 20, p 457. Plus the correction.