For Peter Ridd, it would have been so much easier if he had gone quietly. This battle is not for him, but for our Australian Universities. He shouldn’t need to take this to the High Court, or even the Federal Court. The Scott Morrison government could turn off the tap to every institution which won’t guarantee free speech and enshrine it in their employee contracts. Dan Tehan is reviewing the university model code, but they don’t need a review. They know, we know, everyone knows, without free speech our universities are just Big Government advertising agencies, or victims of the latest FashionThink trend. Those funds could be frozen tonight, and watch how fast the universities can rewrite their contracts. At the speed of light…

Donations are already flowing in for the High Court Battle. Thank you to all who can help his GoFundMe Campaign. 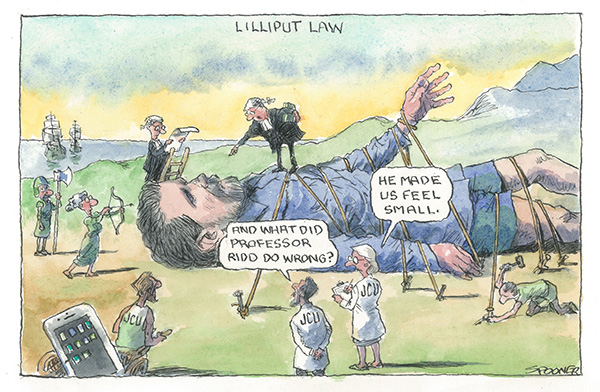 From John Spooner, The Australian.

Sacked James Cook University professor Peter Ridd will go to the High Court over his controversial sacking for publicly criticising the institution and his colleagues over their climate change science.

A week after the Federal Circuit Court overturned an earlier court decision awarding him $1.2m, the marine physicist has confirmed the next front in his legal battle that has already cost more than $1m. Professor Ridd, who has personally spent $300,000 in his fight, has rallied his supporters in a fresh fundraising bid aimed at amassing $630,000 to bankroll his appeal to the highest court.

Professor Ridd told The Australian on Tuesday he had already spent $1.15m on his legal campaign, $860,000 of which came from donations.

For the scientist, 59, the fight is about more than the loss of potential earnings from a stalled academic career. “This is about principle,” Professor Ridd told The Australian. “We’ve got to have it that academics can speak.

“The fact is that because it was justified to fire me, any academic who wants to speak out about the Great Barrier Reef or any controversial issue will know it’s not worth the risk.”

“Anything he (Tehan) does has to be put into the (enterprise) agreement,” Professor Ridd said.

“As soon as there is any doubt, the university will win because the academic knows they can’t afford the legal battle.”

Ridd case must go all the way to the High Court

The recent Federal Court decision on the sacking of Peter Ridd is a victory for intellectual timidity, collegial double-speak and institutional cowardice by the ironically named James Cook University. Reading the judgment, I was reminded of the way the majority judges in the Pell case came to their conclusion. That miscarriage of justice was fortunately reversed by the High Court.