Fake Warming in Queensland: The BOM says the sites didn’t move, but photos show they did. 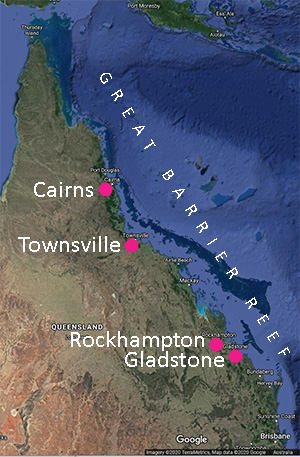 The warming at these four sites alongside the Great Barrier Reef is due to site changes, incompetence, poor record keeping and “adjustments”. Map: Terrametrics, Map data Google 2020

All along the coast near the Great Barrier Reef, the BOM has claimed temperatures have warmed in the last 50 years, and they’ve calculated it to a tenth of a degree. To get that kind of accuracy the thermometers need to be carefully placed, and the BOM needs to know exactly where they were, but they don’t.

The BOM keeps long pages of site descriptions and exact dates of moves and equipment changes, but historic photos show the records are wrong. The BOM will solemnly swear a site was in the same place for decades but photographs and archives show the sites were often moved as developments sprang up around them. The BOM didn’t keep the records and didn’t bother to check. If the thermometer moved to a warmer location or it warmed because they replaced the standard 230-litre Stevenson screen with a 60-litre toy one, or no longer cleaned it of dust and grime that’s climate change at work (Ka-Ching).  There’s probably a thermometer 500km away that can be used to “correct” the record. (Like say, Coen or Musgrave which are used to “adjust” Cairns and are 452 km and 746 km away!).  Near enough’s rough enough! Homogenisation is fatally flawed and should be abandoned.

“The notion that the Great Barrier Reef is threatened by climate change and warming depends on incompetent records, unjustifiable ‘corrections’, super-sensitive thermometers in smaller boxes, and neglected sites” says Johnston.

Dr Bill Johnston has done the work documenting our sites that the million-dollar-a-day Bureau of Meteorology can’t find time to do. He uses aerial and satellite photos as well as ground based shots from the national archives. The BOM says the climate is the most important issue for life on Earth, but it isn’t important enough for the BOM to find the archived photos and documents that show the thermometers kept moving and the area around the thermometers kept changing.

If Blair Trewin and the Bureau director Dr Andrew Johnson had even the slightest interest in the Australian climate they would welcome the dedicated, historical work of Dr Johnston with a big thank you. Instead the BOM stopped answering questions, and Bill Johnston finds it difficult to get published anymore in meteorology journals. As the Bureau became an advertising agency for Big Government projects, the  scientific evidence apparently became a pain in the neck.

The same team that holds the raw data and the metadata, is also the same team that analyses it and makes political statements it. They are the only ones who know what the instruments are really measuring, they won’t explain in full how they adjust it. The raw data is deleted. The methods are a secret, and the team have become unaudited political actors.

So Bill Johnston has started publishing his meticulous work on his own website. There are four stations there and so many more to come. A life’s expertise and several years of work, done unpaid. The BOM say they are independent, but they are totally dependent on Big Gov for their existence. Bill Johnston really is independent. It’s cost him to publish this and do this work, but he’s done it anyway.

“Despite all the catastrophism and free money, there is no evidence that the climate of the Great Barrier Reef has changed or is likely to change in the future”, says Bill Johnston.

The site at Gladstone has changed dramatically from 1965 to 2016.

He has investigated and analyzed more than 300 of Australia’s most important long term sites, and 80 of supposedly top notch ACORN-SAT sites (which is about 75% of them).

Across Australia no sites have stayed the same. They’ve moved, the original 230-litre Stevenson screens have been replaced with more responsive 60-litre ones; automatic weather stations (AWS) have replaced thermometers; new sites have opened using PVC-screens in the hottest places they could find; observers have gone and they scrimp and save by not mowing the grass or cleaning equipment of dust and grime. “Australia’s warming is mostly due to poor maintenance and electronic thermometers operating in small Stevenson screens”, Dr. Johnston said.

“Evidence that the Bureau adjusts their datasets to support the warming narrative is unequivocal” Bill said; “sometimes they recognise a site change, sometimes they don’t; it’s a non-random pattern.  Many forgotten site changes create a trend they can blame on the climate”.

“Furthermore, as AWS are hard-wired to Melbourne,  Weather language has also changed. “They cook-up a record wherever you are and the weather is always extreme”, Bill said.

“Photographs, aerodrome plans and documents show metadata relied on to make adjustments are faulty and misleading”, said Bill. “For instance, at Gladstone, they replaced the radar; cleared the bush and installed a 60-litre screen 30-metres away; sacked the staff, demolished the office and its unsurprising that as instruments are no longer regularly serviced and cleaned, temperature has increased relative to the climate”.

It’s a debacle up at Cairns as well. They didn’t know what happened at the Post Office or that the original aerodrome site was located beside the old apron. They said that in December 1992 the site moved 1.5 km northwest (to the other side of the runway). However, they forgot that it moved to a mound near the centre of the airport in 1966 and that it moved again before September 1983. Also, as one was bulldozed to build the other and no data was missing, another site must have opened in the interim.

The 60L boxes are too small to allow all the equipment to operate at it’s best. The highly sensitive electronic thermometers at the back are barely 2cm away from the hotter north facing side of the screen. They will record one second spikes in temperature, and the Bureau of Meteorology accepts these spurious spikes as new “hottest day ever” records. 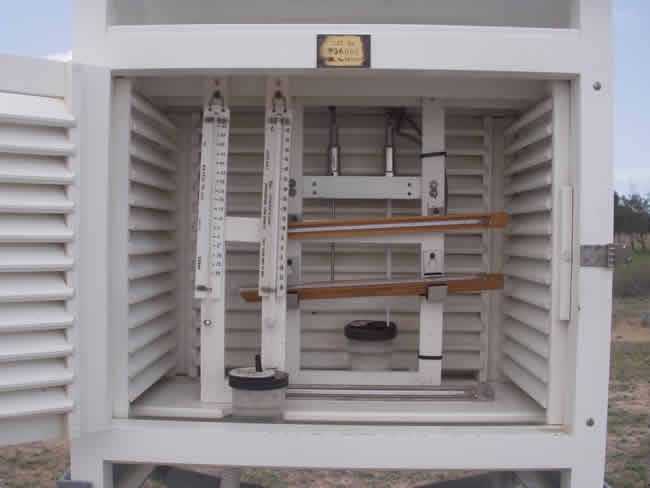 Inside the crowded little 60-litre screen at Townsville. Note the electronic thermometers at the back are about 2 cm closer to the north facing rear of the screen than maximum and minimum thermometers are; which is enough to make them warmer on warm days. Photo courtesy of BoM (http://www.bom.gov.au/qld/townsville/photos.shtml)

The Bureau claims the Townsville airport weather station has absolutely not moved: “There are no documented moves until one of 200 m northeast on 8 December 1994”. However, the site moved at least three, possibly four times while it was on the eastern side of the main runway and probably twice between January 1970 when it moved to a mound on the western side and the most recent move to the AWS. “By pretending the site didn’t move before 1994, they attributed trends and changes in the data to the climate”, Bill said.

Similarly at Rockhampton, where before it moved to a mound near the middle of the airport in about 1956, the original Stevenson screen was near the airport’s northern boundary beside the USAAF garrison and canteen. Warming caused by a satellite communications module installed close-by the second site in 1986 was ignored to imply it was due to the climate.

Sensible scientific debate about the Reef has been lost in the wind of public opinion shaped on the one-hand by catastrophists like the WWF-aligned Climate Council, AYCC and GetUp!, which are intent on driving social agendas; and on the other by saviours like the Great Barrier Reef Foundation, JCU, UQ, CSIRO …

“Follow the money”, Bill says. “So long as it lasts everybody wins; a bit for them and much for us and central to the enterprise is the creation of climate fantasies by the tax-payer funded Bureau of Meteorology”.

“The notion that the Great Barrier Reef is threatened by climate change and warming depends on incompetent records, unjustifiable ‘corrections’, super-sensitive thermometers in smaller boxes, and neglected sites”, says Johnston. “Everything they depend on is modeled and all those models are either wrong or skillless”, he says.

On a site-by-site basis there is no evidence that Australia’s climate has changed or warmed. “Of those that I’ve studied, only Tennant Creek appears to have stayed in the same place”, he said, “and even there, installing the 60-litre screen, a wind profiler array, getting rid of observers and reducing maintenance to just one or two site visits per year has warmed the data relative to the climate”.

PDF link to a summary of this work with more information and for printing.