NEWS: A group say they have developed five antibodies from the old SARS antibody stocks that with tweaking can now bind well to the SARS-2 novel coronavirus.

An antibody is a long string of molecules that binds only to the exact target (we hope). Wikimedia Bioconjugator

If they get through all the testing phases and ramp up production, in theory, these could be ready for mass use in September (but everything would need to go right). They could be injected into patients and within 20 minutes these antibodies would bind to the virus and stop it entering cells. The protection might last 8 – 10 weeks before someone would need another dose.

This could be a gamechanger, but beware before anyone gets too excited, this is very early days — “protoplasm” days. There are a lot of steps to rush through.This group have searched and evolved the protein with their supercomputer which has a huge library of antibodies. They claim to be certain it binds to the virus — and to  exactly the right part of the virus, but they haven’t actually done that yet — they’ll send the antibody to a military secure lab to do that. Then it still needs to be tested in tissue culture, animals, and people, and then more people. We don’t want it to bind to any other cells in our bodies, or trigger the wrong immune response. Side effects can include allergies, anaphylaxis, autoimmune disease, and even their own cytokine cascade.

But don’t write it off — the idea is sound, and if this group haven’t got the right combination, some other group will. It’s another reason to do the serious lock down now because there will be a way of defeating this virus. A tool like this will change the odds, save lives and make tracking and tracing contacts so much more effective, so we can wipe it out.

The hunt for antibodies mimics what our own immune systems do

As soon as a human body gets infected our immune system hunts for the right antibody in the toolkit. We have thousands of different ones circulating. Within days, victims are usually starting to mass produce the antibodies that bind to the virus. Survivors of coronavirus will carry some forms of antibodies, likely for a few months after infection at least. Using their blood plasma is one of the few weapons we have right now. NBL players say they will donate plasma, but there is only so much blood one person can give, and plasma comes with other risks like germs we don’t want to share. Plus recovery to covid-19  takes weeks and many recovering people need their own blood.

It’s also how an antivenom or antivenin works — we collect antibodies from a sheep or horse to a snake venom and have them ready to use in case of snake bite.

The idea here is to find then clone the right antibody and produce it en masse — a  monoclonal antibody.

Dr Jacob Glanville, CEO of Distribute Bio, has revealed he and his team have adopted a pioneering approach which offered the potential for dramatic results. He tweeted: “After 9 weeks we have generated extremely potent picomolar antibodies that block known #neutralizing #ACE2 #epitopes, blocking the novel #coronavirus from infecting human cells.”

The diagram shows the complicated protein chains that fold into antibodies, which hopefully stick in a lock and key type way to important parts of the virus and stop it getting into cells. Antibodies also act as a flag to other branches of the immune system. This is heavy molecular level chemistry. Is that supercomputer modelling really that good? 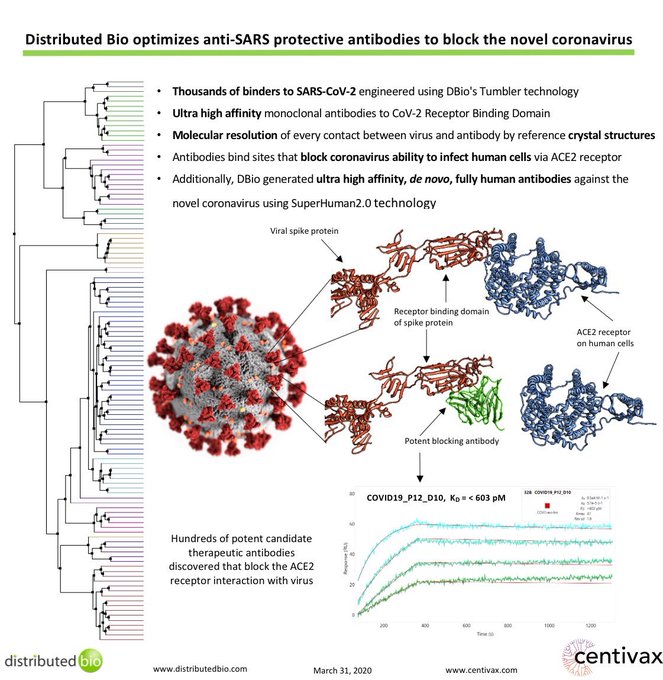 Five antibodies that work against SARS were “evolved” to bind to SARS-CoV-2 (Coronavirus).

Speaking to New Zealand Radio’s Checkpoint programme, he added: “I’m happy to report that my team has successfully taken five antibodies that back in 2002 were determined to bind and neutralise, block and stop the SARS virus.

“We’ve evolved them in our laboratory, so now they very vigorously block and stop the SARS-CoV-2 [COVID-19] virus as well.”

Describing the new virus was a “cousin” of SARS, which emerged in the far east in 2003, he added: “What we’ve done is we’ve created hundreds of millions of versions of those antibodies, we’ve mutated them a bit, and in that pool of mutated versions, we found versions that cross them over.

“You can also give them to doctors, you could give them to the elderly people to prevent them from getting sick.”

Other scientists around the world are also working on developing antibodies, Dr Glanville said, while emphasising his belief that he and his team had a head-start.

In many ways a monoclonal antibody is better than a vaccine, not only might it be available sooner, we don’t have to wait for a person to develop their own antibody response — which can take days or weeks. This could be given to people who are already sick and struggling in hospital. It can also be given to health workers.

Testing antibodies is simpler than vaccine testing, but still has about 5 stages.

They will send it to the US military who can test the antibodies against the whole virus. Glanville’s lab does not have the whole virus (which needs a very high level secure lab). If the antibodies do bind to the virus, then they get tested against human tissue in vitro to make sure they aren’t obviously harmful. Then they probably do animal tests, then human tests, then compassionate trials. But he is still suggesting September as the earliest mass approved use and even that is a compressed timetable.