Get out of the way of this virus.

Could Italy be suffering from a different and nastier strain?

Figures from South Korea and the Diamond Princess may not be a good guide to what’s happening in Italy and Iran. There something seriously different going on there. Death rates are much higher than expected. Three weeks ago, Italy officially had three cases, now a thousand people are dead and 12,000 have the virus. The hospital system is already at the point of being overwhelmed. Reports say that even stroke patients are now missing out on help, the ICU wards are overflowing, and the staff are prioritizing younger people because they have a better chance of survival.

Perhaps Italians hug more and spread more, perhaps it’s worse because they have an older demographic. But perhaps this is a deadlier strain than the one Japan, Hong Kong, Taiwan, Singapore and South Korea appear to be containing. The Italian strain, whatever it is, is from the Iranian strain. Every country that has imported infected passengers from Iran will likely also have the Iranian strain.

Do we really want to follow Iran and Italy?

The great weakness of this 32 k bit of inanimate code is that it constantly needs fresh bodies — all we have to do is stop feeding it fresh fuel. (A bit like fighting a bush fire.)

We can outwait it now, then later outwit it. The code can’t spread without hijacking our cells machinery. It can’t spread if we don’t put it on a plane. It may last for nine days on surfaces, but eventually the code breaks, degrades, and is no longer a threat. Sunlight, air and time can save us.

Comparing this with influenza is irresponsible. We have no herd immunity. No vaccines, no treatments. The black swan inside the black swan is the shortage of ICU beds. This is a bad event until we run out of ICU beds, then it’s off-the-charts. Yes, the death rate is much higher in older people, but that doesn’t make it OK. Do we like grandparents or not?

The exponential curve we don’t want that I’ve been warning of for six weeks is upon us.

As I keep saying, we have only 1 ICU bed per 12,000 people (I assume this is similar in the US and UK etc). If 12% (!) need an ICU bed, then Australia can only afford to allow the number of cases to be 16,000 simultaneously (and that assumes all our ICU beds are free, or that we have increased the number dramatically.)

Coronavirus: Hospitals to be swamped ‘within weeks’, by Natasha Robinson.

Australian hospitals are likely to be swamped by thousands of corona­virus cases within a month, experts say. …

“Basically the doubling time of the epidemic is six days,” Professor MacIntyre [head of the biosecurity program at the UNSW’s Kirby Institute] said. “So it’s going to get worse very, very quickly.

“If it becomes widespread, there is the potential for the health system to be overwhelmed.” …

Doubts have emerged about the need to quarantine people for 14 days, with suggestions this could be reduced in the future. It follows a report by Johns Hopkins Univer­sity in the US that symptoms appear in most people five days after infection. 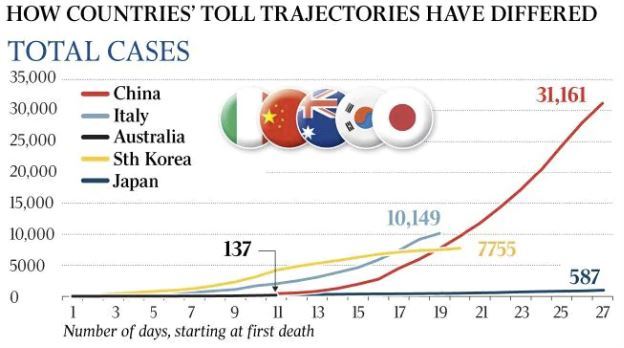 Hospitals will be swamped in weeks. The Australian

To drone on: this is so simple — Quarantine all flights Now. Israel has, Russia has. Every day we wait, we kill more people. International quarantine will no longer stop this virus on it’s own, but it still helps. Then as Yasha Mounk says in The Atlantic  “Cancel Everything”.

The US, Donald Trump, has finally blocked all flights from Europe.  When will we? Every plane that flies in without a two week quarantine potentially means we run out of ICU beds even faster. It doesn’t matter if there is some spread in the community. Tom Hanks and his wife have caught the virus and are in a Qld hospital. We hope they won’t be using one or two of our ICU units next week, but we won’t hesitate to give one to them. But there is a limit and it’s days away.

It’s a bad sign when stars and politicians and stars are going under, but they are a high risk group — they fly and shake hands. Hopefully it is the wakeup call the pollies need.

The Italian situation is out of control

In Time Magazine they graph about 2,000 cases (below) and find that in nearly every country mortality rates fall as testing increases — meaning South Korea found more of the asymptomatic patients than anyone else, and the true death rate is probably under 1%. This looks like good news. But Italy is suffering a 3% mortality rate and it has been doing a lot of testing. I’m not sure how they calculate “mortality rate” and whether that includes delays. But infections must be running undetected through the wider population in Italy, or the death rate would be even higher than this.

Message to readers: The way out is to stay home, order supplies. Sit this out for the moment until we know more. The less you venture out the less likely you are to catch this. Wash hands, don’t touch faces, space yourself from other people.

Do we know what we are letting in to the country?

Statistics from Italy:  Ouch? Could ONE person have caused all but the first three cases? ( I have my doubts). But these numbers are dark.

Higher Institute of Health Press Release N ° 20/2020 – Coronavirus, transmission in Italy for all cases except the first three

The transmission of the Sars-Cov-2 infection occurred in Italy for all cases, with the exception of the first three reported from the Lazio region that were probably infected in China, and a person of Iranian nationality was later reported by the Lombardy region however, it was not indicated where the infection could have occurred even though the person was likely to become infected in Iran. This is suggested by the epidemiological survey conducted by the Istituto Superiore di Sanità, contained in the in-depth analysis that will be published starting today on Tuesday and Friday on the Epicentro website.

Currently, we read in the document based on the situation at 10 am on 9 March 2020, it is not possible to reconstruct, for all patients, the transmission chain of the infection. Most of the cases reported in Italy report an epidemiological connection with other cases diagnosed in Lombardy, Emilia Romagna and Veneto, the areas most affected by the epidemic.

“The investigation – stressed the president of ISS Silvio Brusaferro – finds a significant percentage of cases under 30 years of age, a figure that confirms how crucial this age group is in the transmission of the virus”.

The news is also that young people spread infections. Close those schools.

Italian doctors ‘forced to choose who to save from coronavirus

Italian hospitals are so ‘overwhelmed’ by the coronavirus outbreak that stroke patients are going untreated, a doctor has revealed. The entire country has been placed under an unprecedented quarantine as officials desperately try to contain the virus, which has killed 631 people so far – the highest number of fatalities outside of mainland China. More than 10,000 have contracted the Covid-19 strain of coronavirus, with tens of thousands more being tested in hospitals. A medic in northern Italy said hospitals were running at ‘200 per cent capacity’ with doctors forced into life-or-death decisions over who should receive intensive care.
Read more: https://metro.co.uk/2020/03/10/italian-doctors-forced-choose-save-coronavirus-12377883/?ito=cbshare 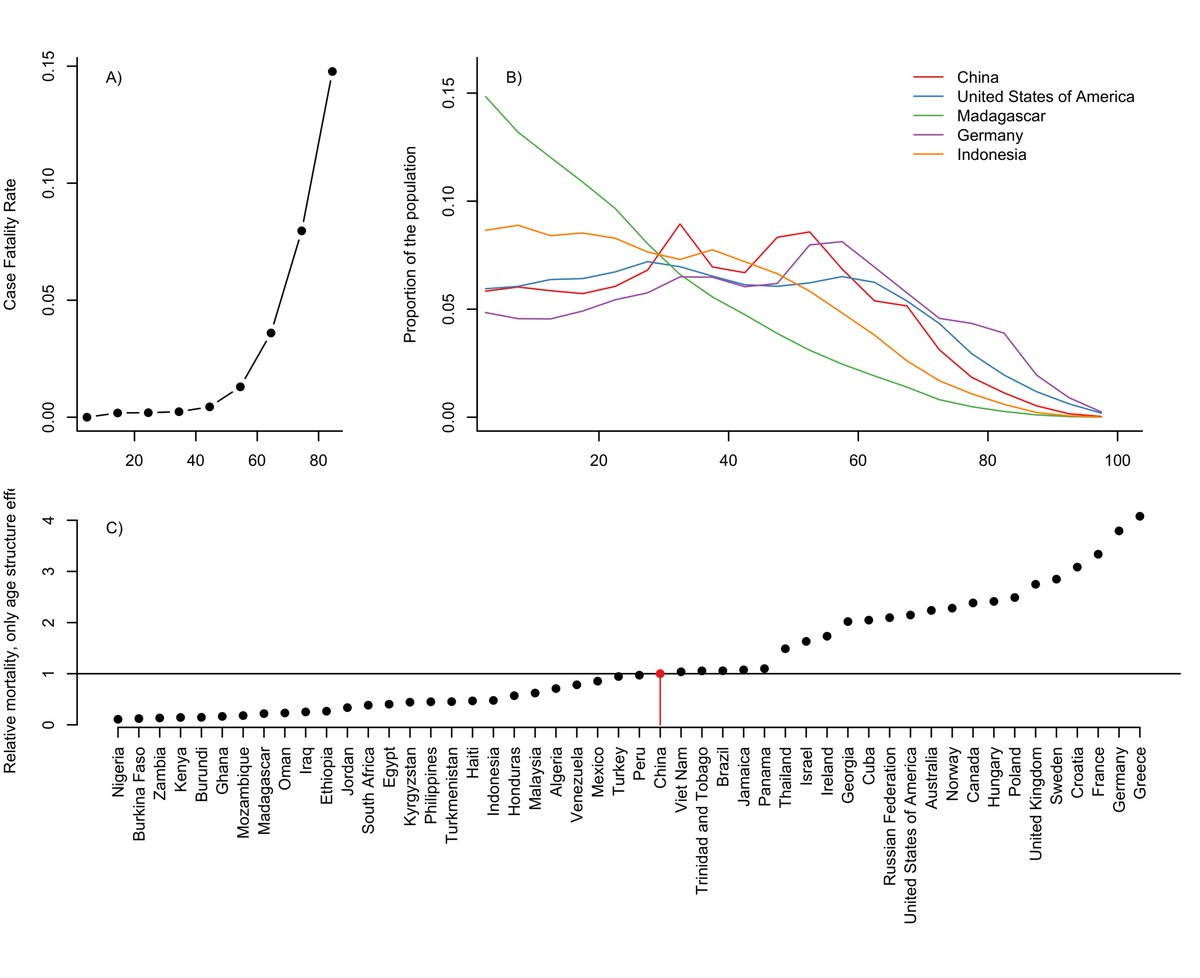 Mortality demograhics from a few weeks ago. Based purely on the ages of the populations we would expect to see a higher rate of deaths in France, Germany, Greece and presumably Italy. Am I reading this correctly? 1% in China means 3 -4% in some parts of Europe?

To reduce your risks: stay home, order food and deliveries. Avoid large gatherings. Wash your hands. Stock up responsibly. If you do have to go out, practice social distancing, don’t touch your face.  Everyone who feels even slightly unwell should stay home and isolate themselves at the very minimum.

Then sit back, relax, and send messages to politicians and newspapers telling them to Quarantine ALL arrivals, starting two weeks ago.

Will we need to stop flights forever? No

Obviously flight quarantines are temporary. This is how the future pans out. We do massive action to control this immediately, asap, and the more the better. We spend the next 1 – 2 years living with the fear of repeat outbreaks. We don’t allow flights from countries that don’t have this controlled except with a two week mandatory quarantine. But sooner or later we will defeat this or find a cure or it will become “another common cold”.

We stop the flights til:
1. We get data and understand the enemy. How bad IS this virus?
2. We get rid of all cases within our nation by standard isolation procedure. Starve the virus. No more free bodies to feed it.
3. The rest of the world copies us (or does it with us) and sooner or later one by one we open up the flights to each nation as it gets rid of the infection. We’re talking weeks.
4. We were lucky with SARS. That was easier because there was no asymptomatic infection. Once we knew this one could spread asymptomatically all that has happened since then was utterly text book predictable.
5. Yes, the deadly exponential curve has been stupidly and recklessly unleashed. People are going to die that didn’t need to. But every day we put off doing what we should have done at the start more people will add to that horrible tally. We can have a big pile or a bigger pile.
6. It’s not a case of aiming to keep the infection rate lower than the point where our hospital system collapses. There is no single more important priority right now. Surely we are willing to spend “quite a lot” to stop the death rate going from 0.5% to 4% because we can’t find enough ICU beds?
7. Australian citizens – bring them home with a 2 week quarantine. There have been no infections in Australia from the Wuhan rescue flights. None from the Diamond Princess.
8. Then after the calm — Then we will need a two week quarantine for flights from countries that have the virus. When the odd incident occurs — as they will — we go straight for isolation and tracking. No holds barred containment. And by then, we might have antivirals. The virus might have mutated. We might have antibodies or CRISPR something. Gene therapy. Stem Cells. RNAi. Biotech will beat this. Let’s give it time.

This could end up being biotech’s great moment. But bureaucracies dumbest mistake.

Coronavirus Background: ☀ The Demographics: the young are spared, but the severity increases with age, and slightly more for men than women. ☀ The Ro is 2 – 3 and exponential curves are steep. How Coronavirus kills: why the number of ICU units matters so much. ☀ Illness progression: Dry coughs and Fevers, Aches. In 15% of people, by day 5 breathing trouble starts. In 3% (?) by day 8 they may need an ICU (intensive care unit). ☀ The good case of Singapore but the ominous calculations of how fast the ICU beds may run out. ☀ The story of how American Samoa avoided Flu Deaths with quarantine in 1918. ☀

Economics: ☀ The huge impact on the Chinese economy, the awful case of Iran.☀