Two weeks ago the Australian grid had a major near miss, and South Australia has been isolated from the rest of the nation ever since. It was supposed to be connected again in two weeks, but repairs to the 6 high voltage towers that fell over, evidently will be longer. Strangely, apparently no news outlet has mentioned this in the last two weeks.

While SA has been the renewables star of the world for two weeks, there’s been mayhem in the market. Instead of cheap electricity with 50% renewables it’s chaos. Allan O’Neill explains that the cost of stabilizing the grid has gone through the roof. It’s so bad, and generators have to contribute to balance their output, that solar and wind power are holding back from supply because they can’t afford to pay the costs to cover their share of frequency stability.

But when South Australia became islanded by the transmission line collapse, FCAS requirements for that region could only be supplied from local providers – and there is only a small subset of participants in South Australia who have chosen to offer in the FCAS markets. With a suddenly reduced group of providers, the price of all FCAS products in South Australia leapt from a pre-event range between few cents and roughly $30/MWh (some higher levels on 30 Jan, driven by the very high energy price averaging over $770/MWh on that day), rising to daily average levels mostly over $100/MWh and in a few cases approaching $3,000/MWh after the separation event – remember, these numbers are daily averages!

Johnathon Dyson estimates it’s added up to $90m. He calculates that some solar panel providers are paying as much as 15% of their revenue (in a normal week) on FCAS, far higher than the 1% they would have estimated when they built their projects.

To put that in perspective, five years ago the entire FCAS cost for the whole nation was about $20m, for the whole year.! (FCAS means Frequency Control Ancilliary Service).

The ever rising costs of frequency stability on the Australian grid for the next quarter are about to go “off the scale” in this graph by the Australian Energy Regulator (AER): 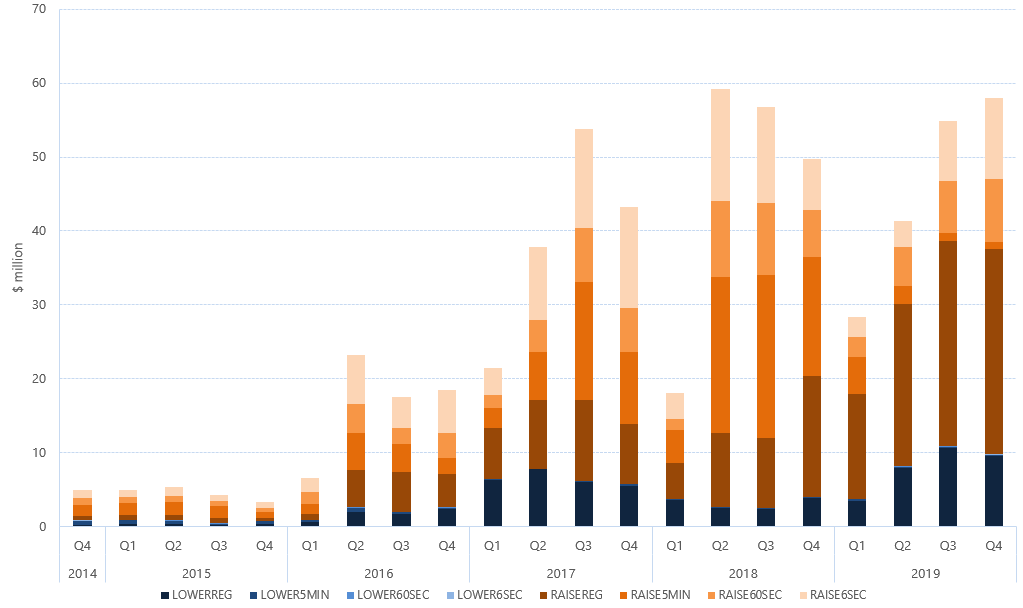 The $90m FCAS cost in SA is higher than any single quarter on the whole national grid. | AER

Years ago frequency stability was just a happy byproduct of the large coal fired turbines. The giant 200 plus ton turbines would spin at 3,000 rpm — exactly in synchrony with the 50 Hz grid. They would absorb the ups and downs and keep the frequency tight within safe bounds.

It’s another hidden cost. Imagine the fun if the whole nation was trying to run on “50% renewable”?

If only SA had kept the coal plants running, says Ian Waters:

The Heywood interconnector can normally carry 650Mw of reliable brown coal fired power from Victoria and regularly stops blackouts in S.A. when the renewables are found wanting. The AEMO has been forced to take extraordinary steps to keep the lights on in S.A. and are ready to force shutdowns of solar, wind and gas units if the demand drops.  They have taken control of the 3 batteries in S.A. in desperation.  It is an !unprecedented! disasterand the whole state is on the edge.  Please look at AEMO market notices 73830, 73832, 73838, 73857 and 73858 and you will recognise how desperate they are and how they are running around in blind panic.

Now here is the first point: If Weatherill, Turnbull and the AEMO had kept the Northern coal fired power-station running, most of these problems would not occur, the price would be much lower, the State would have sufficient system strength and S.A. would not be minutes or hours away from the next blackout!

It’s all just another reminder of how fragile our “renewable” grids are now. Despite having nearly twice as much infrastructure to make the same amount of electricity, SA can’t keep itself going without help and a lot of extra money. It’s more prone to price swings, spikes and squeezes that serve Big Corporate profiteers very well.

Someone is making a lot of money out of this. It’s a bit of a short squeeze with few frequency stabilizers able to help. And spikes can reach the same cap as energy charges — $14,700

Historically, FCAS capabilities have been provided mostly by generators as by-products of their main game, energy production, although batteries and certain loads with appropriate controls can also provide some or all forms of FCAS. In an analogous way to energy prices, market FCAS prices are set via bidding and clearing processes, which are fully enmeshed – coöptimised – with the NEM’s dispatch process for energy.

The quantities of FCAS services required are much smaller than the volumes of energy traded through the NEM (like energy, these volumes are measured in MW and MWh).

The striking feature here is that the relationship between energy and FCAS prices was turned on its head by the separation event. That’s largely because under normal conditions, FCAS can often be supplied from anywhere in the NEM, so the cheapest offers from generators, batteries, or loads in any region can be used to meet AEMO’s requirements. Not all generators are able or choose to supply FCAS (until recently none of the NEM’s large scale renewable generators did so – however that is changing, and this post may show why that’s long overdue). But with a NEM-wide pool of potential suppliers, FCAS prices have tended to be lower – often much much lower – than energy prices.

But when South Australia became islanded by the transmission line collapse, FCAS requirements for that region could only be supplied from local providers – and there is only a small subset of participants in South Australia who have chosen to offer in the FCAS markets. With a suddenly reduced group of providers, the price of all FCAS products in South Australia leapt from a pre-event range between few cents and roughly $30/MWh (some higher levels on 30 Jan, driven by the very high energy price averaging over $770/MWh on that day), rising to daily average levels mostly over $100/MWh and in a few cases approaching $3,000/MWh after the separation event – remember, these numbers are daily averages!

This graph shows just how chaotic it has been in SA — but notice the prices — it’s a log scale!

Note also the prices hit a automated-cap on Feb 1st (hence the flat line keeping them at $300/MWh).

This next graph is the exact same graph, but without the automatic cap added. So we can see what the prices would have been. Shocking!

This shows prices for many FCAS products jumping about wildly after separation, with extended periods at $14,700/MWh for a couple of products (the “Raise 6 second” and “Lower 60 second” services

No doubt the whole drama will be used as a reason to build more giant interconnectors. Never waste a crisis!