It’s a flip on a flop. After all the media headlines, a new paper suggests that some climate scientists are not just wrong, they got cause and effect mixed up, and that the wandering “blocking” jet streams are not caused by warmer arctic, but may be causing the temperature changes instead.

“”The well-publicised idea that Arctic warming is leading to a wavier jet stream just does not hold up to scrutiny,” says Screen.

“With the benefit of ten more years of data and model experiments, we find no evidence of long-term changes in waviness despite on-going Arctic warming.””

The truth is that most big models loosely predicted that global warming would make the jet streams less wiggly, but from the mid 1980s the jet-stream-trend was the other way. As the Arctic warmed the “waviness of jet streams increased”. So in 2012 a few modelers came up with a post hoc rationalization of why, really, truly, actually a warmer Arctic meant that the jets streams would wander more. The media enthusiastically repeated it, though it was contentious and disagreed with most models. But oh dear, by golly, by 2015 the trend started to reverse again. Now in 2020, Blackport and Screen are resolving the latest inconsistency by discovering the data going back 40 years and the longer trends. They explain (quite sensibly) that temperature changes in the Arctic have no significant effect on the jet streams, though the opposite might be true.

Welcome to the world of climate modeling where long monotonic trends can be explained in a jiffy, but no one can predict a turning point in advance.

When will the newspapers retract all the false headlines? 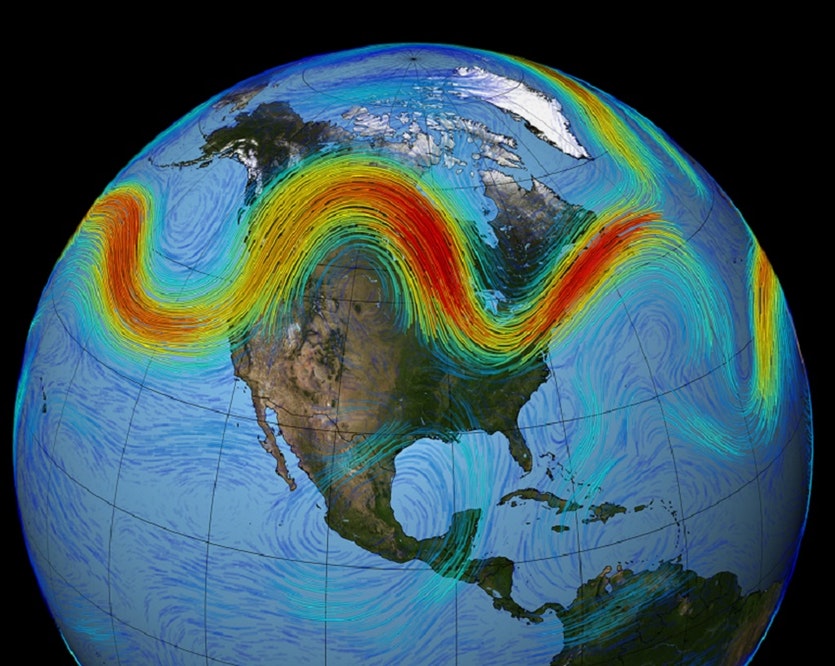 “Global Warming is responsible for Freezing”

This paper heavily criticizes a central media theme in the man made global warming theory. At the core of this was the principle that the poles would warm the fastest, this would reduce the temperature gradient between the poles and the equator, and that would mean the winds would slow too, and the jet streams would be “wavier” (meaning wandering north and south). They would bring hot air away from the equator, and dump cold arctic blasts in the most odd distant places. This Francis and Vavrus hypothesis was only devised in 2012 (discussed more here). This theory though, has been used by the science-media industrial complex to tell us that  cold snaps, snow storms and warm weekends were caused by polar vortexes, which were thus driven by our evil coal plants and our horrible light globes.  If only we drove more Teslas we’d get less blizzards, right?

Media headlines in The Independent, The Guardian, Forbes, Financial Times.

National Geographic may want to interview someone other than Michael Mann next time (see the image below). There is so much wrong with this, starting with the Earth only having two poles and one of them isn’t warming. (Antarctica has generally been cooling since Roman Times. The small part that has warmed sits on 91 volcanoes and the Southern Oceans haven’t warmed either.).

Who knew — the theory was always contentious?

It appears that ever since this theory was published there were plenty of scientists who weren’t sold on it (and these are the same climate modelers that the newspapers usually love to quote — read the introduction of this 2014 paper by Hassanzadh et al.). Indeed it appears many climate scientists really didn’t think that Arctic Warming would create more “blocking” events. Where were they when the journalists were blaming coal stations for storms and blizzards?

It has been proposed that the faster warming of the Arctic compared to the rest of world—so-called Arctic amplification—is altering the atmospheric circulation and contributing to an increase in extreme weather in the midlatitudes (6). One hypothesis proposed by Francis and Vavrus suggests that the reduced equator-to-pole temperature gradient weakens the predominant westerly wind, which, in turn, causes larger-amplitude waves in the midlatitude circulation (7, 8), hereafter referred to as a “wavier” circulation. A wavier circulation has been linked to increased occurrence of extreme midlatitude weather, with the types of extremes favored by amplified waves varying by location (9)

The new paper looks at the way that the Arctic kept warming in autumn and winter but the jet stream waviness didn’t. The increase in waviness suddenly, and for no reason the models could say, reversed in the last few years.  Blackport and Screen do the most surprising thing and draw the obvious conclusion: the models are wrong.

As usual, the paper solves model failures and discrepancies that the public didn’t know existed. Where was that press release?

Our results help to resolve the apparent discrepancy between the observed increased in waviness and the small decrease projected by modeling studies.

So the models predicted waviness would go down, but it went up. Then someone came up with a way to explain that, but now the waviness stopped going up. So we’re resolving nothing much by dropping that dud theory except that climate modelers do not understand what drives jet stream trends.

In the years since the observed increase was first detected (7), Arctic amplification has continued; however, the increase in waviness has not. Over the past 40 years, seasonal trends in waviness across all regions and using multiple metrics are close to zero, in agreement with multidecadal trends simulated by models. This strongly suggests that the previously reported increases in waviness were a manifestation of internal variability.

Note “internal variability” is code for “some factor we don’t know” which in this case could be The Sun. None of the models include little old factors like solar magnetic changes, solar particle flows, or massive solar spectral changes. The Sun swings through high UV years to low ones but the models won’t find out if that matters because they are not even looking.

Actually, it looks like the evidence was already there and for decades that this was incorrect:

We have shown that in both observations and models, there is a correspondence between changes in the meridional temperature gradient and the waviness of the midlatitude circulation on interannual to decadal time scales. However, this correspondence is not seen over the 40-year observed and modeled trends or in model experiments forced with a reduced temperature gradient.

A great day. Finally scientists draw the obvious conclusion about cause and effect:

We conclude that the association is not indicative of a forced response of waviness to Arctic amplification, and instead, it likely arises because of internal climate variability. We further speculate that the relationship between interannual to decadal changes in the meridional temperature gradient and the waviness of the midlatitude circulation is not simply a random occurrence of internal variability but instead partly occurs because the changes in waviness cause changes in the meridional temperature gradient, consistent with physical expectations (19, 44, 45). The combination of internal variability and misinterpretation of causality could potentially explain the discrepancy between observational and modeling studies.

The paper even discusses the media narrative and uses the words “uncertainty” and “overstated” in the same paragraph:

Despite substantial scientific uncertainty, the Francis and Vavrus hypothesis has become a regular narrative in media reporting of extreme weather events (33–35). This widespread media reporting is likely a major reason why there is high public belief that if Arctic warming continues, it will have major effects on midlatitude weather (33). Some scientists argue that the possible effects of Arctic amplification on the circulation have been overstated in the public discourse and distracted from other more certain and no less concerning consequences of climate change (36).

Refreshing. I can’t remember the last time I read a paper that mentioned the “direction of causality” or the need to make “like for like” comparisons between models and observations.

Previous work examining changes in waviness in response to Arctic amplification has focused on either only observations (7, 8, 19, 20) or only models (23, 25–29) or compared recently observed trends to future model projections (18), making fair model-observation comparisons difficult. Here, we attempt to reconcile the divergent conclusions of previous studies by making “like-for-like” comparisons between observations and models. First, we update the observed waviness trends to the end of 2018 to examine whether the previously reported increases (7, 8, 18, 19) have continued and compare them to the range of simulated trends from a multimodel large ensemble. Next, we examine the correspondence between Arctic amplification and waviness as manifested in interannual to decadal variability in both observations and models. Last, we perform controlled model experiments to determine the direction of causality in simulated relationships between Arctic amplification and waviness.

The paper said so much more than the press release:

Jet stream not getting ‘wavier’ despite Arctic warming

Rapid Arctic warming has not led to a “wavier” jet stream around the mid-latitudes in recent decades, pioneering new research has shown.

Scientists from the University of Exeter have studied the extent to which Arctic amplification – the faster rate of warming in the Arctic compared to places farther south – has affected the fluctuation of the jet stream’s winding course over the North Hemisphere.

Recent studies have suggested the warming Arctic region has led to a “wavier” jet stream – which can lead to extreme weather conditions striking the US and Europe. However, the new study by Dr Russell Blackport and Professor James Screen, shows that Arctic warming does not drive a more meandering jet stream. Instead, they believe any link is more likely to be a result of random fluctuations in the jet stream influencing Arctic temperatures, rather than the other way around. The study is published in leading journal Science Advances on Wednesday 19 February 2020.

Dr Blackport, a Research Fellow in Mathematics and lead author of the study, said: “While there does appear to be a link between a wavier jet stream and Arctic warming in year-to-year and decade-to-decade variability, there has not been a long-term increase in waviness in response to the rapidly warming Arctic.”

Scientists have studied whether the jet stream’s meandering course across the Northern Hemisphere is amplified by climate change in recent years. For about two decades, the jet stream – a powerful band of westerly winds across the mid-latitudes – was observed to have a “wavier” flow, which coincided with greater Arctic warming through climate change. These waves have caused extreme weather conditions to strike mainland Europe and the US, bringing intense cold air that leads to extreme cold weather.

In this new study, Dr Blackport and Professor Screen studied not only climate model simulations but also the observed conditions going back 40 years. They found that the previously reported trend toward a wavier circulation during autumn and winter has reversed in recent years, despite continued Arctic amplification.

This reversal has resulted in no long-term trends in waviness, in agreement with climate model simulations, which also suggest little change in “waviness” in response to strong Arctic warming.

The results, the scientists say, strongly suggest that the observed and simulated link between jet stream “waviness” and Arctic temperatures do not represent a causal effect of Arctic amplification on the jet stream.

Professor Screen, an Associate Professor in Climate Science at Exeter added: “The well-publicised idea that Arctic warming is leading to a wavier jet stream just does not hold up to scrutiny.

“With the benefit of ten more years of data and model experiments, we find no evidence of long-term changes in waviness despite on-going Arctic warming.”

Insignificant effect of Arctic amplification on the amplitude of mid-latitude atmospheric waves is published in Science Advances.