There is a strong phenomenon called the Madden-Julian Oscilation (MJO) happening over the Indian ocean North west of Australia.The MJO is a massive convective pattern that churns it’s way from west to east across the Indian and into the Pacific. For 30 – 60 days it’s a dynamo, changing global weather. It has a profound influence on both sides of the world — driving cold winter spells as far away as Canada and the US.

“It’s as extreme as I’ve ever seen it”  — Joe Bastardi, Weatherbell, Jan 6th

“I’m looking at one of the worst 30 days periods in central Canada and western United states.”

“I’m watching what I was taught happen in front of me.”

Joe Bastardi is a long range weather forecaster at Weatherbell and he does a weekly video each Saturday. Last weekend he discussed the MJO and the hot tropical convective pattern occurring in the NE Indian ocean off Australia where, unusually, there are no clouds.  The gap in the clouds allows sunlight in to heat the ocean in the tropics, but also allows the warmer ocean to radiate energy out to space. The outgoing longwave radiation (OLR) is pouring out across the equator in the central and western Indian ocean.This makes cyclones and rain more likely off NW Western Australia.

Bastardi loves the climate and his enthusiasm is infectious. Bear in mind it’s six days old now, things will have shifted. It must be tough making a living out of trying to predict the weather weeks in advance…

There is more energy involved because the oceans are warmer,  yet there is severe cold in parts.

The heat is pouring off the planet at 35W/m2 at 90E in the tropics. (That brown blob in the Indian Ocean). But it’s being followed by storms, clouds, cold and rain.

We all wonder, of course, what drives a 3 month period of very few clouds in the tropics … could it be a solar phenomenon — a shift in the solar wind for example.

Joe Bastardi on the effects over the USA

Most of the West and Central US will be cold, but the pool of cold dense air will lead to storms from the gulf across SE USA.

The man-man global warming theory predicts more water vapor, so there should be more clouds, not less in the tropics. 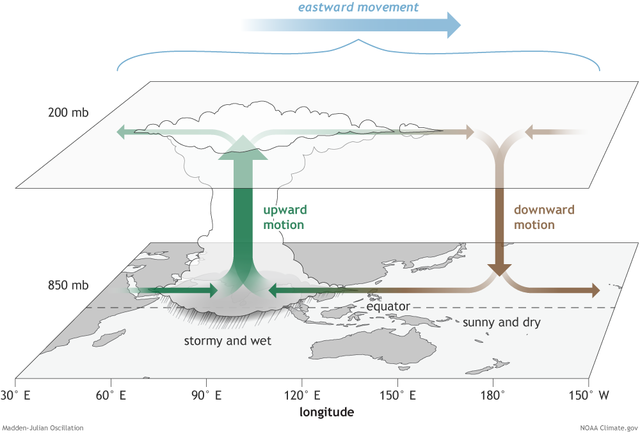 Madden-Julian Oscillation is a pattern that travels east bringing storms and rain and influencing weather right around the globe.

The cloudless warm water cell in the MJO pushes through this pattern from 1 to 8. Right now it’s at 4 (or it was a week ago). Let’s hope it brings some rain to Australia.

It is a large-scale coupling between atmospheric circulation and tropical deep atmospheric convection.[1][2] Unlike a standing pattern like the El Niño–Southern Oscillation (ENSO), the Madden–Julian oscillation is a traveling pattern that propagates eastward, at approximately 4 to 8 m/s (14 to 29 km/h, 9 to 18 mph), through the atmosphere above the warm parts of the Indian and Pacific oceans. This overall circulation pattern manifests itself most clearly as anomalous rainfall.  — Wikipedia

At some point Bastardi comments to the effect of saying something like…. I’m not seeing evidence that man-made CO2 is driving this, but I am seeing solar influence.

Any mistakes in the transcript or “translation” above are all mine. Apologies!