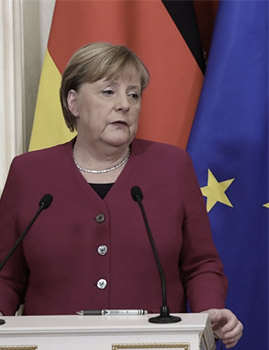 Now she  gets it — fifty years after school:

DAVOS, Switzerland (Reuters) – The world needs an open dialogue about climate change to heal the gap between sceptics and believers since time is running out to cut the emissions that drive global warming, German Chancellor Angela Merkel said on Thursday.

This may seem important after three decades of skeptics being called deniers, and being shut out of every debate, decision and research grant. But it has all the hallmarks of relevance-deprivation-syndrome. The US people elected a skeptic, and he and Saint Greta have stolen her limelight:

The first two days of the annual Davos gathering were dominated by the back-and-forth between the 73-year-old former businessman Trump and 17-year-old campaigner Greta Thunberg, with corporate leaders caught in the middle, concerned that as well as words, there was a need for concrete decisions.

Statements like this provide cover for the reality which is rampant social ostracism, exclusion, coercion and bullying. But it’s soothing theatre for the Davos crowd who would love to be seen to be diplomatic. They are clapping their own generous image.

She drew applause from the Davos audience when she said opposing sides in polarised debates such as that on climate change had to learn how to talk with each other again.

They won’t be going home and inviting skeptics to dinner.

If Merkel was serious she would be seeking out and holding talks with skeptics — with groups like EIKE in Germany (or any of the many names they could provide from industry and science). We’ll believe she means it when Merkel speaks out against the namecalling and treats any skeptic with respect — other than those who are also leaders of the free world.