Peter Ridd and Jennifer Marohasy are continuing to follow up on the death of the Great Barrier Reef. Strangely, while everyone professes to care, and cry, and Malcolm Turnbull casually tossed half a billion at it, we see the extremely radioactive oddity that no one is worried enough to bother measuring the actual supposed decline of the seventh wonder of the modern world. Fifteen years is a long time to overlook that. Many panicked press releases have gone under the bridge yet apparently AIMS (and all the others) just want to keep quoting the shrinking growth rates, but not keep track of them.

On top of that, Peter Ridd and Jennifer Marohasy have spotted a pretty major flaw in the methodology for that much quoted study that claims growth on the reef has slowed by 15% from 1990 to 2005. If that number is right, the reef will have ground down to a 30% decline by now [in growth rate]. Disaster, disaster. Worthy of a hundred press releases and a thousand grants. So either it just hasn’t occurred to AIMS et al to keep studying the reef they say they love, or else they have quietly looked at those growth rates, found the reef isn’t dying and they shelved the results in the “don’t look now folder”.

Oh the dilemma. Which could it be?

The real test here is not about the Great Barrier Reef, which is probably fine, but about the trustworthiness of our scientific institutions. 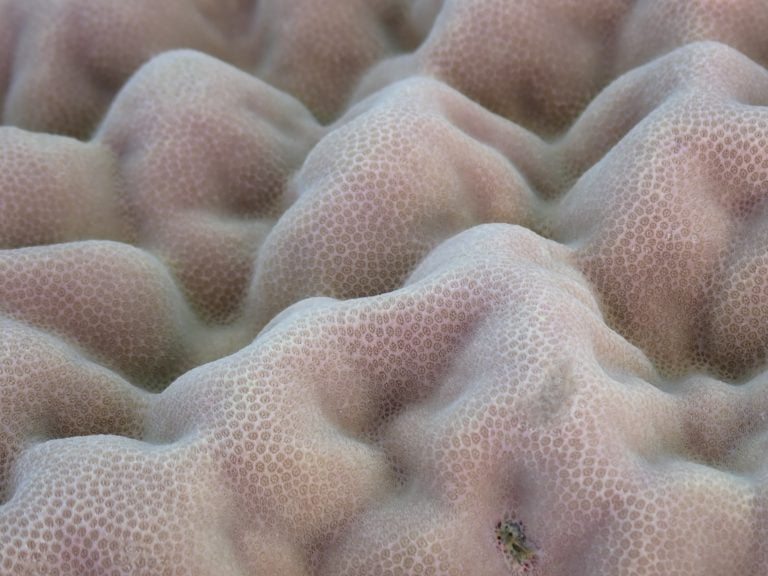 Porites corals are typically used to estimate growth rates the Great Barrier Reef. Jen Marohasy photographed the surface of this coral when she visited Bramston Reef with Peter Ridd in August 2019. “It was so soft, like a carpet, but firm from the corallite: the limestone skeleton supporting individual coral polyps.”

Graham Lloyd in The Australian describes the situation:

The yearly [coral growth] rings are roughly 10 millimetres thick so a coral many metres across can be hundreds of years old. In a landmark study, AIMS took cores from more than 300 corals on the GBR and concluded that for the past 300 years coral growth was stable, but in 1990 there was an unprecedented and dramatic collapse of 15 per cent.

With Thomas Stieglitz and Eduardo da Silva, I reanalysed the AIMS data and, in our opinion, AIMS made two significant mistakes.

The first was incorrect measurement of the near-surface coral growth rings on most of the corals that were giving data from 1990 to 2005. After years of argument AIMS has begrudgingly agreed that it made this mistake. The other problem is that it used much smaller and younger corals for the 1990-2005 data compared with the mostly very large and old corals of the pre-1990 data — it changed its methodology and this is what caused the apparent drop at 1990. When we corrected this problem, the fall in growth rate disappeared.

No Data on Coral Growth Rates for 15 Years

This is the first in a series of blog posts planned on what Peter is calling ‘The Coral Challenge’. Graham Lloyd has a companion piece, also in today’s The Australian.

Great Barrier Reef Truth May Be Inconvenient, But It Is Out There
By Dr Peter Ridd

We have no data of Great Barrier Reef coral growth rates for the last 15 years. Has growth collapsed as the Australian Institute of Marine Science claims?

Is the Great Barrier Reef (GBR) being affected by climate change, the acidification of the ocean, and the pesticides, sediment and fertiliser from farms? One way to tell is to measure the coral growth rates. Our science institutions claim that coral growth rates collapsed between 1990 and 2005 due to stress from human pollution. Remarkably, despite having data of coral growth rates for the last few centuries, there is no data for the last 15 years. We don’t know how the GBR has fared since 2005.

Peter Ridd is predicating that when the data is finally analysed it will show little change in growth rates, perhaps some improvement. The Australian Institute of Marine Science (AIMS), in contrast, is predicting a significant fall in coral calcification rates.
Science is a method. The best test of competing theories, hypotheses and claims is with the data.

If I had time, I’d do a similar graph of the AIMS reputation, which might be the only thing matching the AIMS graph prediction right now.

But a second and almost equally valuable outcome of measuring the missing data is that it will be an acid test of the trustworthiness of our major science institutions. AIMS have dug in their heels and denied they made a major methodological mistake. Let’s do the experiment and see if they are right, or untrustworthy. Same for me. If this measurement is done, and done properly, and it shows there has been a major reduction in coral growth rates, I will be the first to accept I was wrong and that there is a disaster happening on the reef.

The coral challenge is a measurement that will have to be done sooner or later. The longer it is neglected the worse it will look to the public. Farmers who are accused of killing the reef are especially interested.

We need to make sure these new measurements are done properly and without any questions about reliability. They must be supervised by a group of scientists that are acceptable to both sides of the agricultural debate on the reef to ensure methodology and execution is impeccable.

There is more on Jen’s blog:https://jennifermarohasy.com/2020/01/no-data-on-coral-growth-rates-for-15-years/

Golly and gee….  the missing data rather says an awful lot. One of those rare times when the lack of data is more conclusive than any error bars ever could be.