ABC writers see only the cruel obstacles in the way of a wealth transfer:

Who knew that the whole point of financial winds is to kill off dumb investments in the first place? Not the socialist ABC.

If the ABC weren’t an advertising agency for Big Gov dependents, the headline could have read: 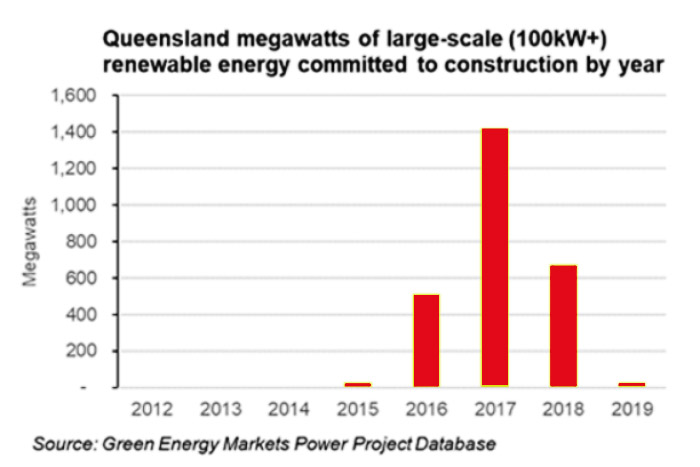 Solar no longer ‘a licence to print money’

Investment has ” has fallen off a cliff.” And there is more of that coming: “Queensland and South Australia have been at the forefront of depressed solar prices, but Mr [Tristan] Edis argues News South Wales and Victoria will not be far behind.

By business reporter Stephen Letts, (Are they kidding? Business?)

Independent wholesale energy market consultant Allan O’Neil has waded through the 660 pages of the ‘Generator Statistical Digest (GSD) 2019’ and found one of the key themes was the struggle new solar farms were having “with the messy reality of the electricity market”.

Back then, NEM wholesale prices were averaging close to $100/MWh (megawatt/hour)…

And which poor suckers paid those bonanza prices …. oh wait….the same ones who pay for the ABC? Stephen Letts doesn’t ask. It’s all about corporate capitalistic projects…

…and the renewable generators’ other key source source of income, Large-scale Generation Certificates (LGCs) were roughly similar — around $80-90 MWh per certificate — an indication of the paucity of renewable energy in the system at the time.

The profits looked so good, but they were all fake, from subsidies and forced payments. Solar panel investors were investing in big government whims, not in energy generation.

Almost all the research and info in this came from Allan O’Neill at WattClarity. In a nutshell, solar isn’t profitable even in Queesland because the lines are long, transmission loses are large, the electricity comes when customers don’t need it, and the government keeps insisting the solar farms pay for “grid stability” (FCAS) because the grid needs it, and solar doesn’t supply it.

As I said last year: Random Energy is the gift you don’t need

Wind and solar power are the intermittent freeloaders on the electricity grid. They are treated as if they’re generators, adding power to the grid, but instead they provide something the grid doesn’t need — power that can’t be guaranteed.

Random gigawatts has the illusion of looking useful, but it’s the gift of a spare holiday house you don’t know if you can use til the day before. It’s the spare fridge in the garage that overheats in hot weather, the extra turkey for thanksgiving that might not arrive til the day after.  The bills, the storage, the clutter, the chaos.

POST-NOTE: It’s what they don’t tell you.

As usual, the lies by omission change the whole story. Stephen Letts writes about the cost of solar power:

Mr O’Neil said falling construction costs also helped spur the investment boom, with some projects then reportedly being economic at all-up revenues in the $60-80/MWh range.

… but he doesn’t mention that brown coal was not just economic, but profitable at $30/MWh.

The $80-90 MWh price for Large-scale Generation Certificates (LGCs) had nothing to do with a paucity of renewable energy in the system. The price reflected the penalty for a power retailer who failed to buy sufficient certificates which was a non-tax deductible fine of $65 per MWh (indexed for inflation). The non-tax deductible provision meant that the cost to the retailer was around $87. Of course renewables generators set their price close to that. In order to temporarily bring retail prices down the regulator has authorised retailers to defer purchase of certificates for three years, at which time they had to procure them. Demand for certificates dropped and the non cost effective renewables industry, needing the subsidies represented by the certificates offered low cost deals to retailers. When the three year hiatus ends and retailers have to purchase outstanding certificates as well as the certificates for that year, prices will return to previous levels. The large and small scale certificate subsidies are nothing more or less than a price on carbon (dioxide) by stealth.