Big Government strangles our ecosystems just like it strangles scientific research.  Australia has had 57 bushfire inquiries since 1939. We knew what was coming and we knew how to stop it, and we’ve known for eighty years (and indigenous people for thousands). Instead we paid a garrison of gravy trainers to not-read-those-reports and to create the exact conditions we knew would turn into a pyroconvective catastrophe. State Premiers missed a major threat to their people, their industry, our environment. On top of the death and destruction toll, just one industry, tourism, is looking at a $4.5b loss. Heads must roll. If they were misled, then name the names.

Our institutions failed us: The CSIRO didn’t save us, the ABC didn’t. What’s the point of them? Academics and CRC’s could’ve warned the nation, but instead most experts and the “reporters” said renewable energy would prevent these fires, even though climate change has made no difference to rainfall or droughts, which are driven by ocean currents, and solar cycles, not carbon dioxide. Let’s promote those who got it right, and turn off the tap to those that didn’t. Who pays damages? Who gets sacked? 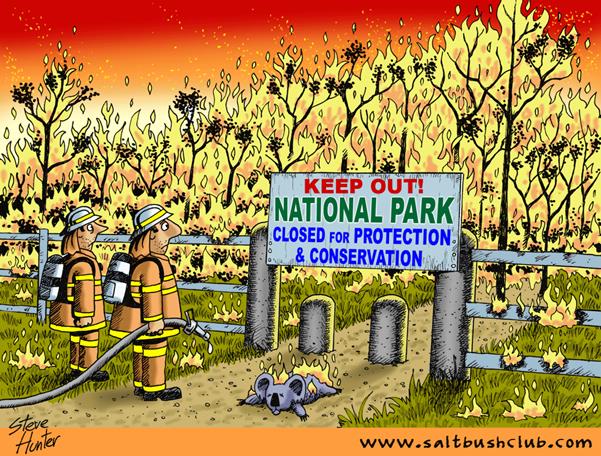 Cartoon thanks to Steve Hunter and the Saltbushclub

Government by Enquiry
by Viv Forbes

Politicians hide behind enquiries – their magic answer to all problems, especially bushfires.

Announcing enquiries give the impression of decisive action, they generate fees for armies of barristers, lawyers and bureaucrats, and provide momentary excitement for the media.

The proposed 2020 Australian Bushfires corrobboree will provide a grandstand for the Climate Rebellion Mob who will get starring roles on ABC/Fairfax. Big business will probably propose a carbon tax to fight bushfires while foresters and land owners will hardly be heard.

When the final report is ultimately delivered, the media will be off trumpeting some new climate “emergency” to scare the public. The expensive new report will be quietly filed with all the others.

We’ve had at least 57 bushfire enquiries since 1939 – about one every two years. Anyone who bothers to read them will soon deduce what should be done. Nothing much has changed except there are more people living in fire prone zones with no protection, and more forest and private land was locked up with heavy fuel loads.

The current bushfire tragedy has occurred after 30 years of unprecedented government control of environmental policy at all levels of government. Many of these destructive policies have been imported under so called “international agreements”. As a result, ordinary Australians have been dragged into court for constructing firebreaks or removing dangerous trees on their own land. Governments and green advisers have assumed total stewardship of the environment and they own the results – massive destruction of lives, homes, property, animals and vegetation – over five million hectares and 2,000 homes burnt.

Here is a five point plan which should come from Bushfire Enquiry number 58.

City based politicians and bureaucrats have done enormous harm by locking up land and opposing fuel load reduction.

There is no useful role for the Commonwealth unless asked by States or regions for logistic support or to help fund bushfire training and fuels management. Otherwise it is better if Canberra politicians keep out of the way – send them all for a holiday in Hawaii.
Viv Forbes

Viv Forbes has been an explorer, pastoralist and weather-watcher in Queensland and NT for most of his long life. He has lit fires (accidentally and deliberately), and he and his wife have fought fires and had their camps, fences and pastures wiped out by fires. They were both members of a local bush fire brigade for over 25 years. (Judy even had formal training).