Western Australia is a giant experiment: Even the Energy Experts are saying solar is  jeopardizing the grid — it’s “dumb” 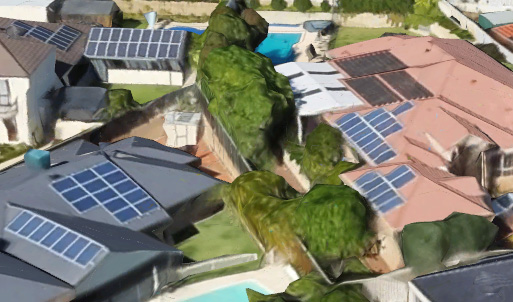 The Western Australian grid is a separate island from the rest of the nation. It’s roughly a 2.5 GW system for 2.5 million people. WA is getting into trouble faster than nearly anywhere else. Solar PV is now up to …. something larger than 850MW (which is the size of the coal fired generator). The ABC doesn’t tell us what the real figure is (according to the AEMO it’s around 1300MW, and growing at 120MW a year). There are no interconnectors to rescue WA, just the taxpayer or hapless electricity consumer.

Unreliable solar is now the largest single generator in the Western Australian grid. It’s not only bad because there are no other states to dump the excess energy on, or to save the state, but despite the vast size nearly everyone lives within 100 kms (60 miles). So when the sun peaks for one it nearly peaks for all. When the clouds roll over, especially when those nice north-south aligned fronts roll in, it covers most of the infrastructure in minutes.

This could be fun (but not for Western Australians).

Now he tells us?

The rise of solar power is jeopardising the WA energy grid, and it’s a lesson for all of Australia

It is a cautionary tale for the rest of the country of how the delicate balancing act that is power grid management can be severely destabilised by what experts refer to as a “dumb solar” approach. “We talk about ‘smart’ this and ‘smart’ that these days,” said energy expert Adam McHugh, an honorary research associate at Perth’s Murdoch University.

“Well, solar at the moment is ‘dumb’ in Western Australia. We need to make it smart.”

Adam McHugh’s an “Energy Expert” at a uni, so his solution involves more centralized control and more dumb money. Apparently, we need to control people’s solar panels, and install “smart” batteries. Jo thinks we don’t need smart batteries, we need smart politicians, and smart academics. We need a smart grid — one that isn’t trying to control the weather, just to keep the lights on.

Now High and Low-demand days are both risky: “congrats”

It used to be that peak summer and winter were the headache days for the AEMO, now they get to worry about fine days in spring and autumn too. Some “achievement”.

The Australian Energy Market Operator (AEMO), which runs WA’s wholesale electricity market (WEM), said the islanded nature of the grid in WA made it particularly exposed to the technical challenges posed by solar.

AEMO chief executive Audrey Zibelman said these challenges tended to be most acute when high levels of solar output coincided with low levels of demand — typically on mild, sunny days in spring or autumn when people were not using air conditioners.

As random solar drives out the cheap reliable coal, the WA grid is headed for the intractable bind where solar destroys the thing that allows people to afford and run solar.

In other achievements we gained random unneeded electricity and lost “flexibility”:

“What we’re recognising now is that the flexibility we need in the system is one [issue] that we have to think about — how do we integrate solar and storage better? And these are new problems that we have to solve.”

The Duck Curve ocurrs in the middle of the day and gets fatter as more solar is added. The ramp up in the evening gets steeper  and more expensive.  This is the advanced Californian Duck Curve (above), but the WA one will be following…

In a “clarion call” earlier this year, AEMO said that if nothing was done to safeguard the grid, there was a credible danger of rolling blackouts from as early as 2022 as soaring levels of renewable energy periodically overwhelmed the system.

At worst, AEMO warned there was a “real risk” of a system-wide blackout.

It’s not just the voltage at risk, the state finances are too

The glorious State machine is driving it’s own state-owned energy company out of business.

The onslaught of renewable energy in WA has cut a swathe through the finances of state-owned electricity provider Synergy.

In September, the utility handed down a massive $657 million loss for the 12 months to June 30, the biggest reverse ever recorded by a government enterprise in WA.

So federal rules that steal money from non-solar consumers (through the RET scheme) helped people buy solar which dumped the cost on non-solar owners. This forced the price of electricity up, making even more people choose solar in order to afford electricity. Now running the grid — which most solar homes are totally dependent on — is more inefficient, which costs more, and either state taxpayers will pay, or non-solar electricity consumers will.

The Government is taking this seriously, they say, they’ve “launched a series of reviews”:

While Mr Johnston said he would be guided by the recommendations of the Government-appointed energy transformation taskforce, he acknowledged there were a few obvious changes that could be made to improve WA’s electricity system.

One was removing antiquated regulations that acted as a barrier to investment in storage capacity, such as community or grid-scale batteries.

How about we remove antiquated regulations that stop consumers from buying electricity from wherever they want to? How about we stop destroying the free market? How about we start charging solar customers fairer prices for the grid stability, both in voltage, frequency, and in back up power that they so depend on? This won’t seem at all fair to solar consumers who were sold something under false pretenses, so how about we figure out who’s accountable for making those decisions?

How about we  immediately stop people adding more solar power problems to the grid unless they go “off-grid”?

The AEMO page on Western Australian Grid: The Statement of Opportunities for the WEMS 2019, see , fig 8, page 26 for the solar capacity.

No doubt some readers will find some interesting data there. Someone’s got to watch WA.

“This PV capacity is forecast to grow at an average annual rate of 7.6% (122 MW per year), with higher uptake expected in the early years of the outlook period, to reach an estimated 2,500 MW installed by 2028-29.”