Snow in December: Has Australia installed too many solar panels? 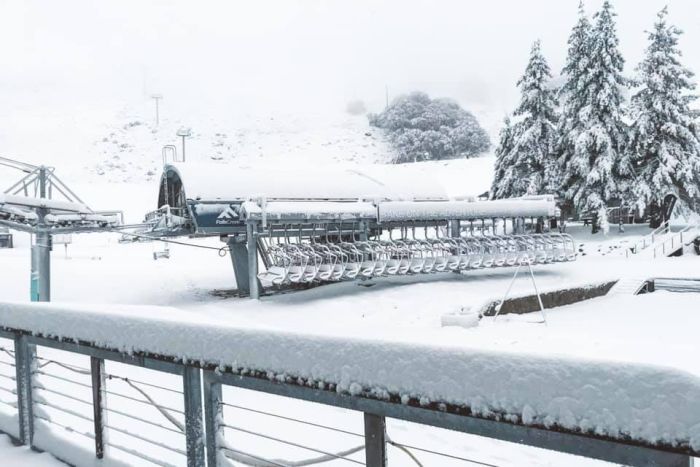 On Monday, the second day of summer, the temperature only reached -1 degrees Celsius at the Thredbo weather station, the coldest maximum temperature recorded anywhere in Australia during summer.

But really cold records don’t matter.  For the first time in history, Blair Trewin, Bureau of Meteorology points out how minor these daily records are:

Blair Trewin, senior climatologist at the Bureau of Meteorology, confirmed that it was a summer as well as December record but pointed out there was more to it.

“In some ways it’s not quite as impressive as it looks,” Dr Trewin said.

This is indeed the only instance of him ever saying that.

“This is because before automatic weather stations were installed in the 1990s, manual observations at high mountain sites [like the top of Thredbo, Mount Hotham and Falls Creek] were very limited outside the ski season.”

Exactly. When will Blair Trewin tell Australians that hot records are not as impressive as they look because automatic weather stations were installed in the 1990s across the whole country and ever since then a mere one second spike of heat can create a whole new “record”  which was not possible to record on glass thermometers for the 200 years before that?

This reminds us that earlier this year, when it snowed in Albany, suddenly the BOM and the ABC discovered historic colder weather records. They still haven’t found the hotter older records…

He said at Thredbo they used to take observations at the top of the mountain in winter and in the village in summer.

Luckily they filed the data as separate stations so they could be differentiated, but most of the coldest mountain-top temperatures from summer before the ’90s would not have been recorded.

“This means that effectively, you’re really only looking at the coldest summer maximum of the post-1990 period,” Dr Trewin said.

We’re looking forward to someone (anyone) at the ABC asking Blair Trewin after the next “hottest ever second” whether effectively we’re only looking at the hottest day since 1996. Perhaps its possible the most remote areas were hotter in the 1800s and the Federation Drought but if they were those maxima would not have been recorded.  (Except of course when they actually were recorded. Remind us again why we ignore all the 50C plus temperatures that occurred across Australia so many years ago?)

Remember either the BOM just makes up the old hot inner desert temperatures, day after day, or the Australian desert was stuck in some kind of ground hog repeat annual weather pattern that exactly matched the Calendar year.

“We don’t have any real information about high alpine summer temperatures before then.”

Every single station in Australia has moved, changed, shrunk in size, got new equipment, or has missing data, or been mowed, ploughed, neglected, infested with wasps, paved with bitumen, got an incinerator on site, or someone built a five lane super highway or skyscraper next door. Given that, no matter what record is set anywhere, if it needs to be dismissed, the BOM can suddenly remember the history. When will Blair Trewin mention that there were just as many very hot days as recorded by the original approved BoM equipment during World War I as there are today?

If it’s a very hot day, it’s a world class system. If it’s cold, well, the data is quite short and patchy…

As I’ve said before If the BOM was incompetent, the ABC would be the last organisation on Earth to find out.