This week 75 years ago. Dust storms, bush fires and unbelievable heat across New South Wales. 118 fahrenheit is 47 degrees C, and there were 100+ temperatures in many places. The sun appearred as a “red sky”. A dust storm created a “terror” in Mildura (just like last week in 2019).

In Parkes, it was the worst dry spell on record. People were going without milk because the cows have died. Thanks to Siliggy, Lance Pidgeon. Holy apocalypse!

The air was calm in Sydney today, but diffusion of sunlight through a dense blanket of fine dust bathed the city in a strange orange glow. Practically the whole of the NSW coast this morning lay under a shroud of yellowish-red dust and bushfire smoke blown from inland regions.

Maximum temperature in Sydney today was 98.7 degrees at 2.55 pm. Early reports at the Weather Bureau today indicated that a heatwave, unprecedented in intensity, was raging’ practically everywhere in northern, western and southern NSW.

Temperatures in many centres remained at over 100 degrees throughout the week-end. At Jerry’s Plains, Hunter Valley district, the mercury reading yesterday was 118 degrees. This was the highest reading reported there for nearly 20 years, and a State record for the present season. 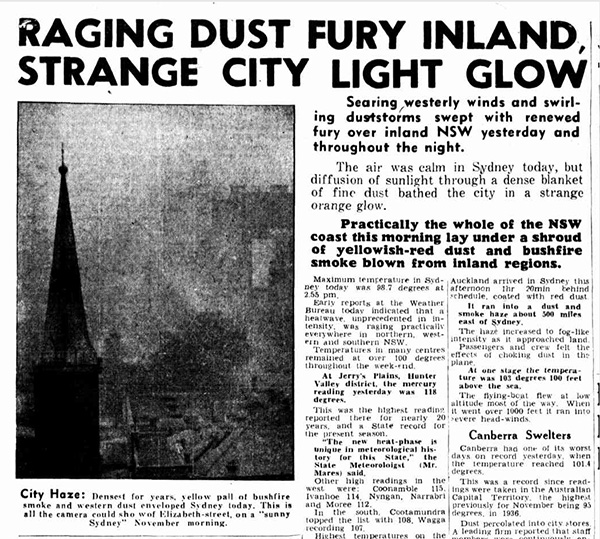 Monday 20th November, 1944:        City Haze: Densest for years, yellow pall of bushfire smoke and western dust enveloped Sydney today. This is all the camera could show  Elizabeth-street, on a “sunny Sydney” November morning. Searing Westerly winds and swirling dusts forms swept with renewed fury over inland NSW yesterday and throughout’ the night.