Fires in Spring? It’s normal for fires to peak in Spring in NSW

Greg Mullins is a former Fire and Rescue NSW commissioner and a councillor on the Climate Council, he implies in the Sydney Morning Herald that this is abnormal and that fires are starting earlier:

If anyone tells you, “This is part of a normal cycle” or “We’ve had fires like this before”, smile politely and walk away, because they don’t know what they’re talking about.

In NSW, our worst fire years were almost always during an El Nino event, and major property losses generally occurred from late November to February. Based on more than a century of weather observations our official fire danger season is legislated from October 1 to March 31. During the 2000s though, major fires have regularly started in August and September, and sometimes go through to April.

This year, by the beginning of November, we had already lost about as many homes as during the disastrous 2001-2002 bushfire season. We’ve now eclipsed 1994 fire losses.

Mosomoso: The fire season in NSW is spring — this is not early, this is “late season”

Spring is the main fire season for NSW. Because of the winter-dry/summer-wet pattern and the spring wind patterns you will get massive burns like now and 2013 and 1951 and 1980 and 1895 etc. There can also be lethal fires in summer when the spring pattern persists with drought and westerlies. Hence 1939, despite La Nina and time of year.

This talk of “early season” is a stunt. September is normal peak for fire here and when the rains and storms don’t come in October/Nov…that is “late season”. In the past the severity depended on how much good growth preceded the spring dry (1951 came after the all-time wet of 1950). With the lack of forestry, fire-maintenance etc now….who knows?

The coastal areas north of Sydney in NSW are listed as a “Spring” peak fire season. Sydney is in the “Spring and Summer fire season” zone. 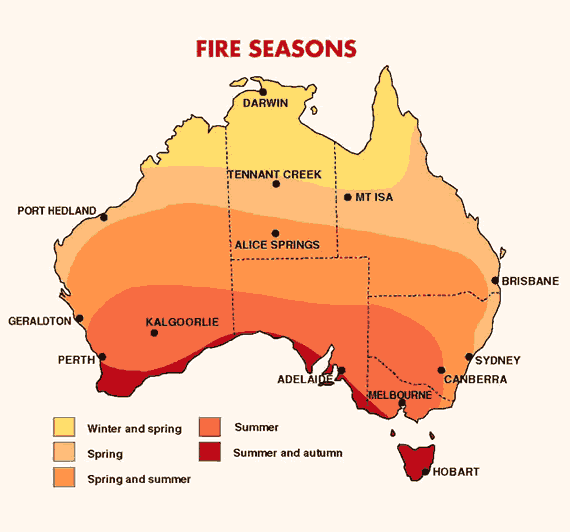 As Silliggy (Lance Pidgeon) notes far back in 1951 before “climate change” the fire season in Queensland was listed as July – January 30. So these seasons are nothing new. And it was the dry cold that helped the fires.

The dry-cold wave has caused the extension of the bushfire danger season in central and South-West Queensland.

Normally the fire season is from July 1 to January 30. It has been extended to June 30. Rural Fires Board inspector (Mr. G. Gentry) said last night that proclamation of the fire danger season meant all burning off had to be brought under the notice of the chief fire warden in each area. Any fires have to be kept strictly to regulation limits.

Crops ruined
Bean and pea supplies to the city markets yesterday were the lowest for months. A marketing official said frosts had wiped out bean crops in South Queensland.

The cold snap had forced down the demand for citrus fruits, he added. The Weather Bureau forecasts further frosts for the next few days in South Queensland. Brisbane’s minimum temperature of 43.2 deg. [fahrenheit] yesterday, war 7.3 below normal, and 3.8 lower than on Monday.

And from Bob Fernley-Jones, the worst fire in Queensland was October 1951.

BUSH FIRES WORST IN Q’LAND HISTORY BRISBANE, Oct. 2.
Queensland s bushfire outbreak was the worst in the State’s history, said the Rural Fires Board Inspector (Mr. G. Gentry) tonight.He asserted that 98 p.c. of the fires burning now were started deliberately. Under soaring temperatures, fires were burning to day in many parts of the State.
A fire near Clermont, in Central Queensland, is reported to be out of control, with the heat so intense that fire-fighters could not approach within 100 yards of the flames. From Injune to Baralaba chains of fires stretch for 150 miles.

The fire between Injune and Baralaba is out of control in dense timber and rolling grasslands. While fighting a fire at Eidsvold. Mr. A. Bramley was overcome by the smoke and had to be dragged from the flames.

Airline pilots said to day that smoke enveloped a vast area bounded by Emerald (central Queensland),the Darling Downs and Casino (NSW). Capt. M. Mitchell, of Queensland Airlines, said there were hundreds of fires in this area.

The 1951 fires were caused not by a long drought, but by lush seasons followed by a short drought of 8 months

FRIDAY, NOVEMBER 23, 1951. BUSH FIRES
For the most part Australia’s seasonal reverses are measured by the incidence of flood and drought, both of which are capable of taking a heavy toll; but from time to time there enters into the picture a third hazard, that of the bush fire. Never before has greater devas- tation been wrought amongst pastures, livestock and timber assets than is being exacted by
the bush fires that for weeks have devastated large tracts ot country . in New South Wales and Queensland. If anything, they are worse in New South Wales, for there the forest fire menaces the outskirts of cities and towns, even Sydney itself, adding the tragedy of people being burned out of their homes.
In Queensland we have es-caped that extremity, but cur- rent losses in stock, pastures and fencing are reputedly! severe enough in all conscience. Nor does it end with the passing of the fire. Stock which’ escaped the flames are faced with starvation on burnt out runs, and owners have the formidable task of restoring fences with inadequate supplies of labour and material. It is safe to say that the evil influences of the bush fires of 1951 will long remain with us.
The severity of the fires this year is accounted for by the lush seasons of the past two years, which provided a luxur- iant crop of herbage and
undergrowth that became tin- der dry from the eight months drought that succeeded the flood rains early in the year.
9.6 out of 10 based on 71 ratings