Stone Island is the reef that put Peter Ridd’s career on the road to the high court. Last week Jennifer Marohasy released a mini documentary showing corals around Stone Island that weren’t supposed to be there. It was a bad look for Dr Tara Clark, the expert who had said the corals were gone.

This week Graham Readfearn hit back with “Scientists say rightwing think tank misrepresented her Great Barrier Reef study”. Apparently Marohasy must have used a right wing camera or something.  (Those corals you saw are not really corals). If only Readfearn had not used a left wing keyboard, where the only truths it could tell were projections of his own flaws onto everything else.

Dr Clark apparently now denies she said the corals were all dead. Saying “We never claimed that there were no Acropora corals present in 2012.” Poor Guardian readers, as usual, get spoon-fed thin slices of technicalities and weasel words, never the whole truth. 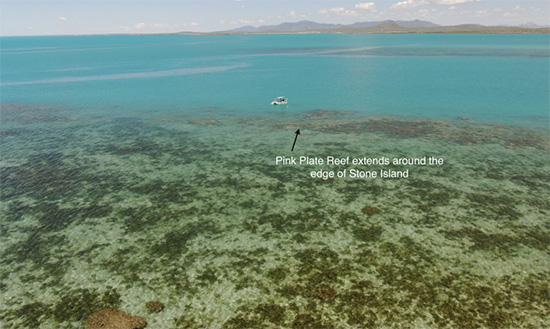 This picture was taken with Jen Marohasy’s drone, Skido, looking south east towards the edge of Pink Plate Reef
on 26th August 2019.

Are you now or have you ever been an Acropora coral?

In reply Jennifer Marohasy just quotes the same Dr Clarke in her own papers:

At Stone Island, the reef crest was similar to that observed in 1994 with a substrate almost completely devoid of living corals.”

For Stone Island, the limited evidence of coral growth since the early 19th Century suggests that recovery is severely lagging.”

It’s clear Dr Clark said  the reef was similar to a report from “1994” when there were “no living Acropora” and the “substrate was almost completely devoid of living corals.” So that’s all right then, Clark only said it was “like” there were no live corals. It’s not “like” that is misleading. 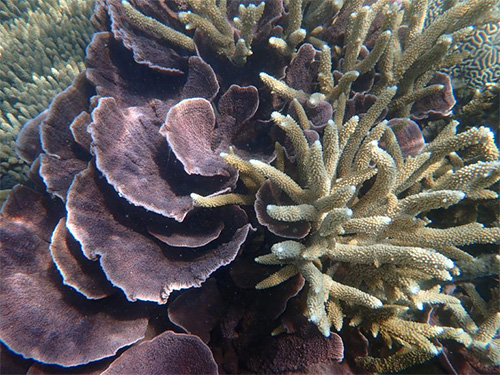 Jen Marohasy’s study was too small says Mr Readfearn, but Tara Clark’s was even smaller…

According to the nonsense article by Mr Readfearn, quoting academic Dr Tara Clark, I should not draw conclusions about the state of corals at Stone Island from just the 25 or so hectares (250,000 square metres) of near 100 per cent healthy hard coral cover filmed at Beige Reef on 27 August 2019. Beige Reef fringes the north-facing bay at Stone Island.

But Tara Clark… “based this conclusion on just two 20-metre long transects that avoided the live section of healthy corals seaward of the reef crest.”

The whole Great Barrier Reef covers 348,000 km2. Rather than just a couple of transects, Jen Marohasy surveys more and also describes a bigger better study that the whole media “forgot”:

Queensland sea levels have been falling for 5,000 years (see Lewis et al). Sea levels also fall with El Nino’s.  This puts the highest part of the reef at the most risk:

It is uncontroversial in the technical scientific literature that there has been sea-level fall of about 1.5 metres at the Great Barrier Reef since a period known as the Holocene High Stand thousands of years ago.

It is also uncontroversial that sea levels fall with the El Niño events that occur regularly along the east coast of Australia most recently during the summer of 2015–2016. As a consequence, the reef crest at many such inshore fringing reefs may end up above the height of mean low spring sea level. This is too high for healthy coral growth; because of sea-level fall, corals in this section of these reefs are often referred to as ‘stranded’ and will be dead.

Dr Clark studied the reef crests which are the high parts of the reef. Join those dots and the parts Clark studied were probably the most likely to have stranded, dead corals.

Dr Clark and colleagues clearly state that they began their transects at Stone Island at the reef crest, which they also acknowledge is at ‘the upper limit of open water coral growth’. It could reasonably be concluded that Dr Clark’s study set out to sample the section of this reef that could be referred to as stranded.

Why indeed. Possibly there are more grants in finding dead corals than live ones?