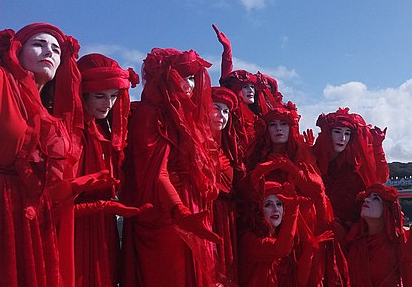 The Red Brigade uniforms are mass produced and the same all over the world.

Major oil and gas discoveries and subsequent investments in infrastructure projects are set to help the oil and gas industry in Africa to grow, also helped by improved governance and regulation, PwC said in its newly released Africa oil & gas review 2019.

“One of the most dramatic finds in Africa over the past decade is Mozambique’s natural gas estimated at over 180 tcf, which has already unlocked the first three large-scale LNG projects,” according to PwC.

These projects and additional exploration could make Mozambique the world’s third-largest LNG producer after Qatar and Australia by 2030, PwC says.

So seven XR groupies turn up outside an African oil and gas conference to show just how arrogant they are:

In a media statement, the group said: “Following the protest on Tuesday 5 November, Extinction Rebellion continues to oppose Africa Oil Week being held at the Cape Town International Convention Centre. This conference brings together international corporations, governments, investors and lobbyists, who – despite the global ecological crisis – continue to value profit over both people and the planet. The delegates who attend this conference are climate criminals.

“While they make billion-dollar deals, they do not care about global warming caused by their industry, or the floods, droughts, typhoons, pollution, crop failures, refugees and misery that result… These climate criminals are not welcome here!”

XR demands the declaration of a “climate emergency” which would legally assist vandals and self-serving protestors with an excuse for the damage and danger they may create:

Extinction Rebellion want government to acknowledge and declare a “climate and ecological emergency, reverse all policies inconsistent with addressing climate change, and work alongside the media to communicate this to their citizens”.

XR also want to force everyone to do what they want and to subvert democracy because voters are not as smart as 21 year old activists:

They also demand a legally binding policy to reduce carbon emissions to net zero by 2025, and for the creation of a national Citizen’s Assembly to oversee these changes.

The African’s have exactly the right response:

Two floors above, the hundreds of delegates at Africa Oil Week were largely unaware – and mostly unmoved – by the display.

“Under no circumstances are we going to be apologizing,” said Gabriel Obiang Lima, energy minister of Equatorial Guinea, adding that they need to exploit those resources to create jobs and boost economic development.

“Anybody out of the continent saying we should not develop those fields, that is criminal. It is very unfair.”