If the planet was at stake you’d think the BOM would be doing this research, not unpaid volunteers.

Bill Johnston has shown again, that the BOM is apparently unaware and, perhaps most damningly, not even interested in most of the things that happened to their official thermometer sites.

Port Hedland is supposedly “one of the best” researched sites in Australia — so it is a certified ACORN site (one of the 112). The trends matter, and being remote, it influences a large area. But one man with dedication and no funding at all can find key historical maps and photos that the BOM, with its million dollar-a-day budget, cannot.  Instead of doing this hard work the BOM uses the magical homogenization process “to fix” up all the anomalies by hunting for data in sites hundreds of kilometers away that can be used to adjust the records at Port Hedland. This is the secret process that even the BOM admits it cannot describe in full to anyone outside the BOM. As Johnston says, it’s a process so bad it “should be abandoned”. There is no saving the error correction that starts with bad data, missing documents, and barely any historical research and then pretends it can mash more bad data to produce “truth”.

One of the biggest flaws in the homogenisation process is that changes to stations swept across the country around the same time at many stations. In the wake of parallel changes, is a trail of sudden very artificial step changes in records at far distant stations. During World War II, the RAAF controlled many of the sites and after the war ended, some sites went to the Dept of Civil Aviation, others to the Met Bureau. As managers changed, so did practices and positions. Then in the 1950s passenger jet travel “took off” and runways grew larger and longer. The thermometers were often shifted around during these expansions. Meanwhile in post offices automatic telephone exchanges were being added, and in 1972 Fahrenheit thermometers become Celsius ones. In the 1970s microwave towers were added. In the mid 1990s electronic sensors arrived to replace the older mercury or alcohol bulbs, and screens shrank from 240 Litres down to just 60 Litres.

Homogenisation makes it possible to take these artificial jumps and spread the errors and biases to stations without the same changes. The process is so use-less it is damaging the data. Rather than detecting climate change, the process invents it, making it appear that changes to sites were really a change in the climate.

In the meantime it’s left to volunteers.

The curious case of Port Hedland

Port Hedland is a hot dry place in the far North West of Western Australia. The average rain is about 11 inches annually (286mm). Evaporation though, is a ferocious 3.2 meters a year. The Port Hedland post office started recording temperatures in 1912, was hit by a major cyclone and inundated in 1939. From 1948 the records come from the airport. In 1939 the towns racetrack was converted into a landing ground and an Aeradio base was set up. Aeradio was a tracking station to watch and connect with flights going from Perth to Broome and warn the pilots about approaching weather. But the RAAF were not happy with the tidal swamps around it, and they set up a few runways 12km east of there by 1943. It had a workshop and buildings and even a machine-gun post. Such were the times! The official screen probably moved there in 1944.

The official metadata record for the site only says that the airport site opened in 1948 and that there was no useful overlap between it and the postoffice — which is not surprising given how many changes there were in the 9 years before that.

The metadata mentions ” that the “site moved within the airport grounds (585 m north-northeast) on 27 March 1981”. Johnston wonders which site moved and what happened to the Aeradio and RAAF data before 1948. 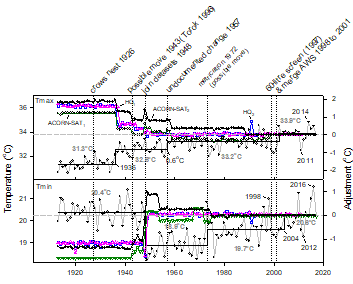 In this figure Johnston lined up all the sites that were used to homogenize the Port Hedland record in the period around 1968 – 1975. It’s easy to see that these were also often affected by artificial step ups in 1972 or 73. 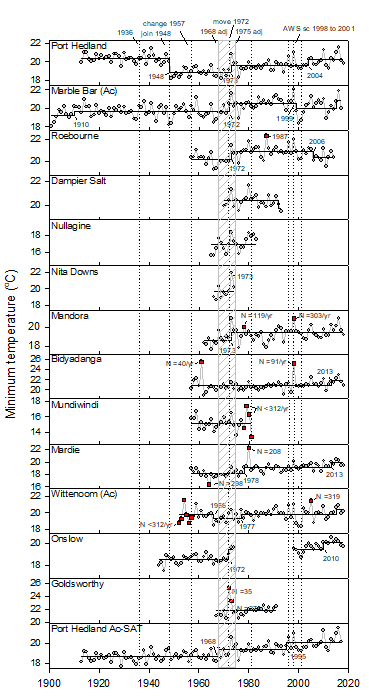 Limiting warming that hasn’t happened to 1.5oC relative to pre-industrial times by some time in the future is based on the faulty notion that homogenised temperature data reflect the climate alone.

Across the world and particularly in Australia no weather station sites have stayed the same. Therefore its important that effects caused by site and instrument changes are not attributed to the climate.

Historic temperature data collected to monitor the weather were from thermometers of unknown quality exposed in the shade, hung on the wall of south-facing verandas, in Glaisher stands which were manually turned away from the sun, in ‘thermometer houses’ of varying design, inside iron-roofed Stevenson screens and in some cases inside buildings.

For most historic datasets like Sydney Observatory, Cape Leeuwin, Cape Otway; and post offices like Port Hedland, Bourke, Darwin, Barcaldine and Mildura, details of site changes and the conditions under which observations were made are scant or unavailable. For many it’s not known when Stevenson screens were installed or the state of the instruments or if the vicinity was watered. Homogenisation aims to adjust for non-climate effects, however as explained in this note, methods used by the Bureau are unscientific, biased and should be abandoned.

There is no evidence in their reports that independent peer-reviewers[1] investigated datasets or looked for problems in homogenisation methods, or in the way data are observed or the usefulness of historic data for tracking trends or changes in the climate.

The three obvious sources of bias ignored by peer reviewers are:

Of particular concern is that by ignoring network-wide changes that happened in the 1950s, 1970s and more recently, homogenised datasets embed trends and changes that have nothing to do with the climate.

The problem of correlated comparators

Use of correlated comparators to make adjustments is the most obvious source of bias especially when their data are likely to be tainted by parallel site change effects.

Network wide changes in the 1950s include the post-WWII reorganisation of Royal Australian Air Force (RAAF) Meteorological Section in June 1946 when Aeradio staff moved to the Department of Civil Aviation, and meteorological (met) staff to the Weather Bureau within the Department of the Interior. This required construction of Flight Services offices and control towers and refurbishment of former Aeradio facilities as met and radio-aids offices.

Driven by the need for improved upper-air forecasts for aviation, the second change included deployment of radiosonde balloons to monitor temperature and wind profiles, METOX radar to track the balloons and wind-finding (WF) radar to provide reliable coverage along major air routes. New met-offices usually distant from the previous Aeradio office supported such developments and met-enclosures were up-graded and moved as other facilities such as airport terminals were upgraded and runways strengthened and lengthened to handle jet aircraft.

Also, at about the same time, automatic telephone exchanges were built in post office yards and by the late 1970s, towers for microwave communications. On 1 September 1972 metrication resulted in thermometers across the network being replaced and units of rainfall changed from points to millimetres from the 1 January 1974. Next was the widespread introduction of automatic weather stations (AWS) and they becoming primary instruments from 1 September 1996.

As most network-wide changes are time-coordinated, correlated comparators likely reinforce rather than correct faults in homogenised data.

Replacing 230-litre Stevenson screens with 60-litre ones accelerated from about 1995 and is the single most important cause of network-wide warming and recent record temperatures.

Small screens are not buffered to the same extent by the enclosed air-volume as standard screens and transient eddies from pavements, passing vehicles and aircraft movements cause spikes on warm days, which the Bureau routinely reports as being due to the climate.

Practices that reduce natural cooling via the water cycle such as ploughing, spraying-out the grass and gravel mulching in the vicinity of sites also cause increased warming. Small screens beside dusty tracks at airports, roadsides and in paddocks, which accumulate dust and grime between infrequent service visits are also biased-high while changes such as new buildings, roads and other developments results in frequent over-ranging. In addition, satellite images confirm wind-profiler arrays installed close to screens at Canberra, Adelaide, Coffs Harbour, Tennant Creek and other airports cause up-steps in data that don’t reflect the climate.

As governments depend on the Bureau’s fake-news as much as the Bureau depends on the government’s largess, there is little wonder that those in charge of Australia’s climate are not interested in holding the Bureau to account.