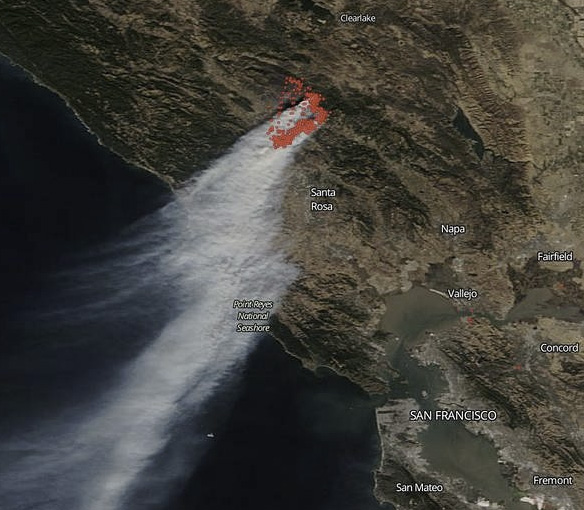 California’s devastating Kincaid Fire located in Sonoma County has grown to over 66,000 acres and NASA’s Terra satellite captured this dramatic image of the smoke plume cascading down the coast. OCt 27, 2019.  |  NASA image.

In Western Australia (WA) we have incendiary gum trees, regular droughts, and humidity so low that sometimes the clothes dry in the washing machine. Far be it for me to tell Californians how to manage their forests, but thought it worth a mention that Western Australian State govt do managed burns on 8% of the forest each year, and our top experts say it should be twice as much.

Compare that to California, where the rate of prescribed burning is now around 0.2% of the forest or so. Not the same type of fire-loving trees, but still the flammable kind…

A regime of green burning also produces a healthier and more vigorous forest and is better for biodiversity. This approach was applied rigorously in WA forests for nearly 30 years, with tremendous success. Unfortunately since about the 1980s green burning has been under constant attack from environmentalists and academics. As a result, in Victoria and New South Wales, especially in forests which are now national parks, almost no effective prescribed burning is done.  Even in WA, where green burning was once championed, the area burnt each year has now fallen well below that required to ensure an effective fire management system. Here the annual burning target is 8% of the forest – simple arithmetic allows you to calculate that this equates to a turn-around time of 12 years, which in the jarrah forest at least is nearly twice the recommended burning rotation length if summer wildfires are to be manageable.

Jon E. Keeley & Alexandra D. Syphard
Although national parks began this movement 50 years ago, it is clear that, over this period of time, they have not come close to returning historical fire frequencies (estimated at 10 to 30 years) to Sierra Nevada forests. For example, 50 years of prescription burning in national parks has only burned around 10% of the forested landscape, which, at this rate, would take 500 years to burn all of the forested landscape, assuming no reburning of previous burns.

Mechanical treatments that remove understory fuels and thin the density of trees has two advantages over prescription burning: it can be done over a greater portion of the year and potentially can pay for itself through timber sales.

Let’s see that data again. After truly awful fires of 1961, prescribed burns were ramped up dramatically, and then wildfires were almost non-existent for the next twenty years in WA. See that data (before someone alters it). Gradually greens took more control of forest management. As less controlled burns were done, the fires of the uncontrolled type increased to “fill that gap”.

In Australia we can either have man made fires or natural catastrophes.

Apparently some Californians have been burning off since practically the end of the last ice age. It’s just university educated Californians who don’t seem to have the hang of it yet:

The native communities across California have been practising traditional, controlled forest burning techniques for 13,000 years….

In much of CA firefighters are not even allowed to let natural fires burn in safe conditions:

In California, the debate over prescribed burns is complicated by a deadly history with wildfires that have grown quickly out of control, the state’s stringent environmental regulations, fear of liability lawsuits and infringement on property rights, and the huge swaths of federal forestland with their own management rules and oversight.

For their part, the Tahoe National Forest’s managers say they understand the ecological value of allowing fires such as the Sugar to burn when conditions are safe. But while the agency has loosened the rules on letting fires burn on some national forests, managers of the Tahoe are still required to extinguish any fire that ignites in the woods as quickly as possible.

Researchers estimate that in 1800, 15% of Californian forest would burn each year:

By some estimates, many of the state’s forests have up to 100 times the amount of small trees and underbrush than what grew prior to white settlement. Meanwhile, researchers estimate that prior to 1800, some 4.5 million acres of the state’s forests burned in a typical year — more than the 1.9 million acres that burned in 2018, the most in modern history.

Yet in a state with more than 30 million acres of forest, only about 87,000 acres of California land were treated with prescribed burns last year to reduce undergrowth prior to the state’s deadly fire season, according to data from Cal Fire, the U.S. Forest Service and the U.S. Bureau of Land Management.

CA doesn’t have the incendiary mix that Western Australia does, but perhaps needs something more than burnoffs once every 500 years.

Best wishes to everyone affected.