The Bushfire season started in August in 1951 in Queensland

In 1946 in August “Mt Archer, in the Kilcoy district, was a 1500 ft torch tonight”. The 1951 fires did £2m of damage, and within three years the people of Queensland responded by creating six times as many fire teams and more firebreaks. One farmer put in 500 miles of firebreaks on his own property.

Since then humans have put out 85% of all the CO2 emissions we have ever put out, showing that cutting our emissions by 85% (in reality, even going wildly negative to get back to 311ppm) won’t stop fires in August in Queensland.

We don’t have a climate emergency, we have a history emergency. It’s like hundreds of years and the effort of thousands of people just doesn’t exist. 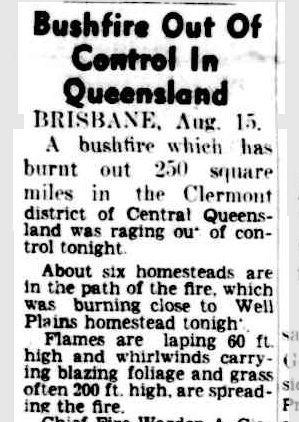 16 Aug 1951:  Adelaide Advertiser: Bushfire out of control in Queensland. 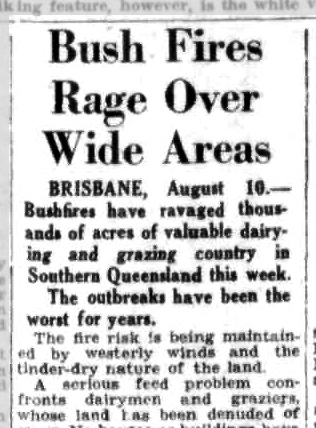 The outbreaks hare been the worst for years.
The fire risk is being maintained by westerly winds and the tinder-dry nature of the land.

After the savage fires of 1951, Queenslanders formed hundreds of volunteer bushfire groups, cleared firebreaks, and it was simply understood that fires were coming, and could occur anytime after August.

“The bushfires of 1951 were the board’s worst on record, with losses totalling more than £2,000,000. Mr. Healy said an outbreak of bushfires this year was so certain that it was just a question of when. There had been two recently in the Monto district, but they had soon been brought under control. Most risky time would be after August, with October possibly the worst month.?” –—  Warwick Daily News, Tuesday 15th June 1954

“One grazier in the Barcaldine district had made 500 miles of fire lines on the one property.” 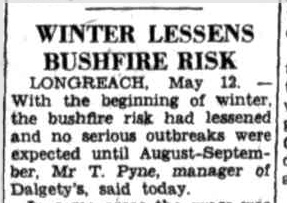 Out in Longreach, fires were so common, the fire season ran all year, but was reduced in winter.

With the beginning of winter, the bushfire risk had lessened and no serious outbreaks were expected until August-September, Mr T. Pyae, manager Of Dalgety’s…

In 1946 in August, hundreds of square miles of drought and flames

And back in 1935, a pall of smoke ranged over Brisbane

The city and suburbs were again overcast with a pall of smoke from bush fires continuing to burn on he ranges surrounding Brisbane.  — 6 Aug 1935: Trove: Courier Mail Brisbane 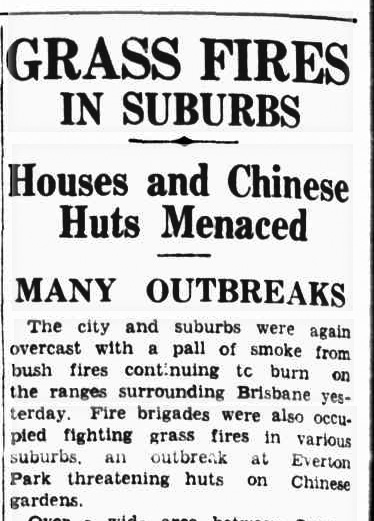 Thanks to Graham Dunton and Pat for finding these stories.

FIRES INVADE FARMS ON NORTH COAST
Several bush fires on the North Coast have threatened farms, and in some cases caused damage… –  August 6, 1935

LOSS AT MULGOWIE
Bush fires in the Mulgowie district during the week-end did much damage, and it is estimated that more than 1000 acres of grass was destroyed. … — Aug 6, 1935

Meanwhile this week in 2019 the ABC and Queensland fire and emergency services are telling us that the fire seasons are starting earlier.

9 Sept: MyPoliceQld: Fire investigation, Lakes Creek
Following investigations into a fire in the Mount Archer area, police commenced proceedings by way of a Notice to Appear against a 63-year-old Lakes Creek man for the offence of Light Unauthorised Fire under the provisions of the Fire and Emergency Services Act 1990.
Around 1.45pm yesterday a member of the public called Triple Zero after seeing a man acting suspiciously in the area.
It will be alleged that the man was conducting his own backburning operations without a permit – and the fire subsequently spread from Lakes Creek to Mount Archer…
The man is scheduled to appear at the Rockhampton Magistrates Court on 8 October 2019.

And some at the ABC chose to talk up the fires, but not mention the arson which was already well known by 11 Sept: ABC The World Today: Residents return home to Peregian Beach as bushfire threat eases By Rachel Mealey on The World Today.