Thanks to Bill in Oz sending in the shot of Mt Barker, Ken Stewart started auditing other sites in South Australia and discovered this masterpiece of expert siting. And thanks to Ken, you can see The Wacky World of Weather Stations: No. 2- Murray Bridge. 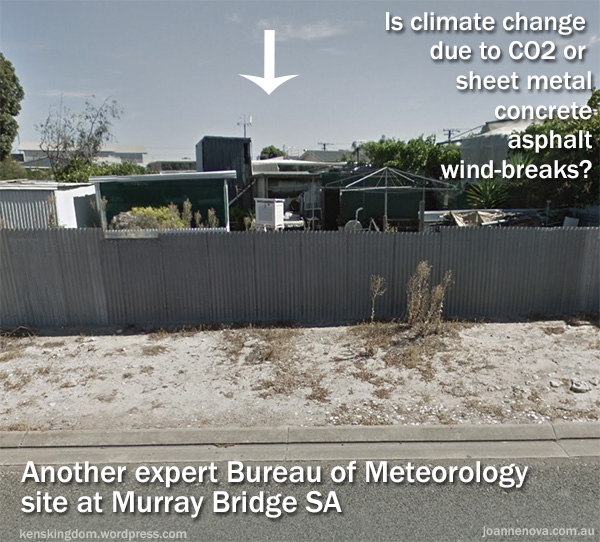 As he points out:

The screen is in a houseyard near concrete paths, vegetable gardens and shrubs, close to a picket fence, within 5 metres of sheds, sheltered from the south by a 1.6 metre high fence, with buildings to the east, north, and west, and less than 10 metres from the bitumen road.

Like Mt Barker, this is another site which is not an ACORN “top ranked” site that the Bureau of Meteorology use, but results from here are used to adjust ACORN sites like Mount Gambier, so it is de facto a part of that network.  Sites like this are also used to create propaganda, sorry, press releases about “hottest ever records”.

The BoM know exactly how bad this site is, and in carefully measured detail.

Somewhere a paid bureaucrat has dedicatedly measured and mapped all the things that shouldn’t be there within a 30 meter radius.

From their site data file PDF

Ponder the awesome attention to detail for a site that should never have been selected. In that single PDF link, there is not just one map like this but 14 separate maps of this same site dated roughly once a year since 2004. Would private industry spend so much money documenting failure or would they just … move the dang site?! And then there are more maps from before that of the site when it was located near the railway station (see below for that photo).

Would any private company spend money analyzing the exact time of day shadows fall on this thermometer each month of the year, or would they just find a 30 by 30 meter square plot of clear land in the most empty inhabited continent on Earth? Does anyone think a supercomputer could calculate what the thermometer should have recorded, and if so, why bother having a thermometer at all?

As Ken says, don’t blame the householder, blame the BoM. As Jo says, send a message to your elected representative.

If life on Earth depends on climate science why don’t the Bureau of Meteorology care about the data? We give them over a million dollars a day, yet they use sites like this to tell us that Australia has “unprecedented” warming.

The thermometers scientists installed in 1896 which recorded extreme heat then may be more accurate than the modern “expert” network, yet the BoM ignore those and use junk like this.

Here’s the expanded view of the site that was chosen in 2004 (white arrow marks the spot). At a glance, there are other sites you might think were better, like the sort under the red dots. Just a thought? Why put that thermometer in a backyard? Murray Bridge is not exactly a metropolis without open space….  | Imagery  ©2019 Google, Map data

Before 2004 the site was near the railway line which must have had big upgrades. But the question remains, why did the thermometer move from a bad site to a worse site? But who really wants to know if Murray Bridge is getting warmer? Not the Australian BoM.

If people want to send in more site photos, start at the BoM page for Climate Data Online. Type in the town, and “Find” the nearest site. On that site’s page look to the top right for a button marked “Details” to find out the lat and long. If you visit a site, please respect the privacy of any homeowners, don’t share street addresses or car number-plates publicly. Email me: joanne AT this site domain.