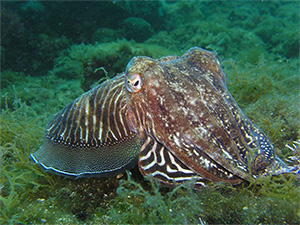 Squid, “surprise” are going to do well with climate change. (If only it was going to happen).

In the new post-CO2 world, corn and soy may become weeds, but squid may take over the oceans:

Squid will survive and may even flourish under even the worst-case ocean acidification scenarios, according to a new study published this week.

Dr Blake Spady, from the ARC Centre of Excellence for Coral Reef Studies (Coral CoE) at James Cook University (JCU), led the study. He said squid live on the edge of their environmental oxygen limitations due to their energy-taxing swimming technique. They were expected to fare badly with more carbon dioxide (CO2) in the water, which makes it more acidic.

No academic could have guessed that squid would have evolved ways to control their own blood pH:

“Their blood is highly sensitive to changes in acidity, so we expected that future ocean acidification would negatively affect their aerobic performance,” said Dr Spady.

Atmospheric CO2 concentrations have increased from 280 parts per million (ppm) before the industrial revolution to more than 400 ppm today. Scientists project atmospheric CO2 — and by extension CO2 in the oceans — may exceed 900 ppm by the end of this century unless current CO2 emissions are curtailed.

To researchers at safe-space-universities life is full of surprises:

But when the team tested two-toned pygmy squid and bigfin reef squid at JCU’s research aquarium, subjecting them to CO2 levels projected for the end of the century, they received a surprise.

“We found that these two species of tropical squid are unaffected in their aerobic performance and recovery after exhaustive exercise by the highest projected end-of-century CO2 levels,” said Dr Spady.

But unpaid bloggers who do a search with the words “squid evolution” find that while their ancestors knocked around since the Cambrian 500 million years ago, the ones today have had at least 60 million years of wild climate change to practice adapting. Though our knowledge is hampered somewhat by the tendency of boneless jelly-creatures to disintegrate. Even so, it turns out squid are hyper adaptable.

Throw out the genetics rule book! Squid edit their own RNA:

… it turns out that they and their cephalopod brethren evolve differently from nearly every other organism on the planet.

In a surprising twist, in April 2017 scientists discovered that octopuses, along with some squid and cuttlefish species, routinely edit their RNA (ribonucleic acid) sequences to adapt to their environment.

“The consensus among folks who study such things is Mother Nature gave RNA editing a try, found it wanting, and largely abandoned it,” Anna Vlasits reported for Wired.

But it looks like cephalopods didn’t get the memo. In 2015, researchers discovered that the common squid has edited more than 60 percent of RNA in its nervous system. Those edits essentially changed its brain physiology, presumably to adapt to various temperature conditions in the ocean.

Will we end up with an ocean full of squid?:

He said it may be an even greater boost for the squid as some of their predators and prey have been shown to lose performance under predicted climate change scenarios.

“We think that squid have a high capacity to adapt to environmental changes due to their short lifespans, fast growth rates, large populations, and high rate of population increase,” said Dr Spady.

The only thing researchers can say for sure after all those grants:

“The thing that is emerging with most certainty is that it’s going to be a very different world,” he said. 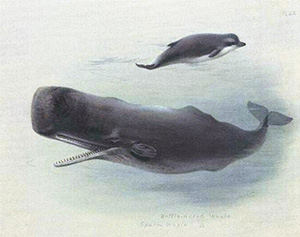 Check this out. Squid live everywhere from pole to pole, from shallow to deep. But look who’s coming to dinner according to the FAO Squid, Marine Resource Fact Sheet?

Estimates of global squid consumption by higher predators, especially sperm whales suggest that they consume a greater mass of squid than the total world catch of all marine species combined (Voss, 1973; Clarke, 1983).

If I read that correctly (and I’m dubious)– Sperm whales eat more squid than humans do of all fish, oysters, prawns, crabs and farmed fish, everything globally?

I had to check. Total human fisheries annual catch is 150 million tons. Sperm whales weigh up to 50 tons each and eat up to 900 kg a day.  So if there are 400,000 of them (and nobody really knows) that’s 360,000 tons of squid for dinner per day, or around 130 million tons a year. Oh! Touch and go. It may not be true today (though it might be if there are more Sperm whales) but it was true when those papers were published and annual human catches were only 50 million tons a year. wow.

Holy Calamari. Sperm whales are going to love climate change. So are squid.

Burn oil and save the whales.