How many climate marches does it take to stop a storm? 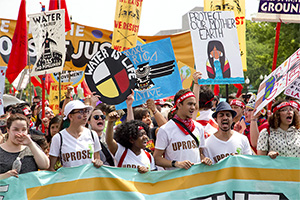 A new climate model includes “social processes” to predict the climate. They expect the fashionality of hybrid cars or solar PVs will help predict the future climate. So serious researchers are now feeding their models with trends in human behaviour. Though there’s no sign climate models may use the million-mile-an-hour solar wind, nor changes to the solar magnetic field that’s bigger than Earths orbit. They’re also not using solar spectral changes, but who cares about the odd quadrillion joules of ultra violet fritzing or not-fritzing our ozone layer? So much better to track twitter trends on solar panels instead.

The fixation on CO2 is so obsessive compulsive it’s practically a science cult. This kind of work puts the psycho in psychology.

Years from now when everyone agrees it was The Sun, historians are going to fish deep from this well of academic obsession:

So far, results are not looking too good.

Who would have guessed that “social norms do not protect against rising temperatures”?

Their analysis suggests that the rate at which people learn about climate mitigation strategies via social interactions, such as hearing that a friend bought a hybrid car, strongly influences climate outcomes. Social learning takes time, so plausible values of this rate alone could raise warming predictions by over 1 degree Celsius.

No matter what, the answer is always a carbon market:

The researchers also ran the model with different parameters to explore how mitigation efforts could be optimized. “Our socio-climate model indicates that an increase in social media and other campaigns to raise awareness, such as climate marches and international reports, should ideally be followed by governmental and other incentives to reduce carbon emissions,” Bury says.

Don’t ask what future event this model ever predicted.

Senior author, Madhur Anand states that “There are pathways for humans to mitigate climate change, but processes driving behavior and norms at the individual and societal level will be essential to all of them, and our longstanding work on coupled human-environment systems applied here to climate change is providing direction in this regard.”

The researchers note that their model is relatively simple and future research efforts should assess whether models of a higher complexity produce different forecasts. Collaborating author, Chris Bauch says “Mathematical models that capture social dynamics and their interaction with climate trends will become increasingly used in climate research.” Models that accurately capture the interplay between population behavior and climate change could improve predictions and inform mitigation strategies.

Let’s take a stupid simple model and make it stupidly complex. Can I have a grant for that?REFERENCE

Photo by Vlad Tchompalov on Unsplash