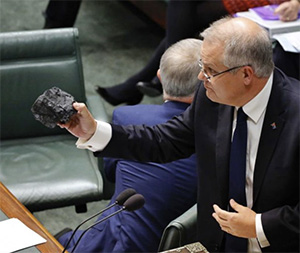 The Coalition can now form a majority government with no need to do deals with a GetUp candidate. They may win 78 seats. While this is being hailed as a “great” win it’s nothing like Tony Abbott’s 90 seat landslide in 2013. Of the last three elections, the most skeptical PM won hugely, and the biggest believer, Turnbull, almost lost. Morrison-in-the middle, couldn’t fight hard on climate change because his party supports major and expensive action, but at least he didn’t burn off the base like Turnbull did. Luckily for him, the Labor Party had wild ambition and was doomed by overconfidence. (Thank the ABC).

Every time Labor and GetUp reminded Australia that Morrison brought a lump of coal to Parliament, they were helping Morrison.

This was a “climate change” election and Australians voted No

Even ABC commentators admit the central role of climate change and are baffled. (If only they had shown some, any, interest in the opinions of 50% of Australia?). Watch the struggle:

Election 2019: What happened to the climate change vote we heard about?

It was supposed to be the big issue of the 2019 Australian federal election: climate change.

A range of polls and surveys had left many analysts, myself included, with the sense that this would be a crucial issue at the ballot box. …  ABC’s Vote Compass survey those identifying climate change as the most important issue had risen from 9 per cent in 2016 to 29 per cent in 2019.

Advocacy groups and even media outlets also encouraged the view that 2019 was, and should be, Australia’s climate election.

Andrew Probyn, the ABC’s favourite political “analyst” — who completely missed what was developing — puts personalities, not policies at the top of his list. As if Australians primarily just vote for the guy they like the look of.

Instead, this was unmistakeably a vote for a coal mine:

“Thank you Bob Brown is all I can say. He came up here trying to tell Queenslanders what we should and shouldn’t be doing, and it actually drew together the agriculture and mining sectors — I’ve never seen anything like it.”

In Adani country, Michelle Landry, George Christensen and Ken O’Dowd recorded swings of up to 15 per cent to transform their ultra-marginal electorates into comfortably safe seats.

It’s likely only five of Queensland’s 30 electorates will be held by Labor when the pencil dust has settled.

This was a coal election in Queensland:

“People up here in central Queensland aren’t stupid, they can work out that [Bill Shorten’s] unsure what’s going to happen in the coal mining industry,” said returned LNP member for Flynn, Ken O’Dowd.

Australians want the Adani coal mine built and running. They also aren’t willing to vote for climate change action, even in some of the wealthiest inner city seats (see Kerryn Phelps). All the badly designed polls supporting “climate action” mislead the pundits. If only they had read skeptical blogs, they’d have known that people can tick the believer box free of charge, but when it costs, climate action always ranks at the bottom, and no one wants to pay for it themselves, not even $10 a month. If people don’t even pay for carbon flight offsets or donate to environmental causes, they certainly won’t consciously vote to lose jobs and spend billions. Ultimately, even in 2019, more than half of all Australians don’t buy the UN climate scare. It was only 2017 when 60% of Australians said they were OK with dumping Paris if they could cut their electricity bills.

Kerryn Phelps put “climate change at the top of her agenda” says the ABC. And after only 7 months she’s out. Her primary vote was just 33%.  Mr Sharma (Liberal)  gained 48% of the vote. That’s not much of a honeymoon. Though the end result was extremely close on two-party preferred votes, which is a mark of the great political re-alignment as wealthy formerly Liberal blue-ribbon seats shift to the “inner city” Labor Party while the workers become Liberal conservative voters.

One Nation votes are unmistakeably votes against climate propaganda, and the swings were large. More fool the Liberals, who were so afraid of namecalling attacks by the ABC that they preferenced the Greens ahead of One Nation.

Tell me again how business wants more action on climate change? Investors vote with their money.

This post is quoted in The WashingtonTimes by Valerie Richardson.