David Attenborough thinks fossil fuels cause scores of walruses to careen off cliffs. The ABC is crying as it advertises the latest Netflix tear-jerker and WWF fundraiser.

In behind-the-scenes footage posted to YouTube by Netflix, producer and director Sophie Lanfear explained the events with tears in her eyes.

“It’s the sad reality of climate change,” she said.

“They’d be on the ice if they could be, but there’s no option but to come to land.

Actually though, it’s the sad reality of predatory polar bears 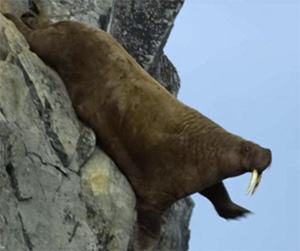 Canadian zoologist Dr Susan Crockford is all over it calling it Walrus Tragedy Porn. Apparently, the Attenborough footage is from 19 October 2017 in Ryrkaypiy, Siberia which was overrun with polar bears that terrorised the walruses.  Five thousand walruses were herded to a cliff.  Hundreds were driven over the edge to their deaths, and afterwards the polar bears feasted off McWalrus on the rocks.
Apparently, it’s happened before and has nothing to do with sea ice:
“We have records of walrus haulouts that are nearly a century old, including some from this part of the Arctic. The idea that walruses are being driven on shore by sea-ice decline is entirely incorrect. They have always done so. In fact there are reports of walruses falling over cliffs from long before the age of global warming too. Sir David’s story about climate change appears to be just that – a fable.”
Buying a Tesla probably won’t save a single walrus.
The ABC doesn’t mention this, nor find an zoologist expert to interview. They don’t even google it. Instead, they give us the-world-according-to-WWF:

“Earlier on, when there was ice, the walruses did not need this place,” he said in a short clip posted on the Our Planet website.

“They are meant to live on the ice. Now they have lost this ice platform essential for their everyday life in the Chukchi sea.

“Many scientists blame this on global warming.

Then for the 4,400th time, ABC breaks their own rule about only interviewing real experts:

“I am not a climate specialist, but the fact is, over the last 34 years the ice has just disappeared before my very eyes and the animals, their natural habitat has changed, that fact is undeniable.”

Of course, if they’d interviewed an actual expert, or even a blogger, they’d know that ice comes and goes, and so apparently, do marauding mean poley bears.

Should we save more polar bears? Let’s ask a walrus…

For more info including footage from a 1994 episode of falling Walruses see Susan Crockfords site.