A major new “nail in coffin” study shows the more renewables we force onto the market the more expensive electricity gets. 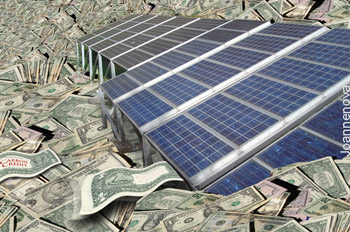 Everyday someone tells us renewables are cheap, but these estimates come from flawed “LCOE” method (at best) supposedly the lifetime cost, but without many indirect costs. Granted, it’s hard to figure out what the bill for renewable energy is. But what really matters to every man and his dog, is the cost effect on the whole system, not a cherry-slice comparison of a few sunny-windy hours a day which doesn’t take into account the effect that renewable energy has on the rest of the 24/7 electricity grid.

Greenstone, McDowell and Nath have analysed all 29 states in the US where there are laws demanding a certain percentage of energy be renewable. On average a 4% increase in renewables led to a price rise of 17% and the impost was wildly high compared to any remotely sensible cost-benefit analysis. Renewables are the car insurance bill that costs 3 times as much as your car. Any serious environmentalist would hate renewables.

The cost to consumers has been staggeringly high: “All in all, seven years after passage, consumers in the 29 states had paid $125.2 billion more for electricity than they would have in the absence of the policy,” they write.

Greenstone et al analyze the RPS (Renewable Portfolio Standards) in the US. This is like the RET in Australia and the Renewables Obligation in the UK. Like any market destroying rule, it ensures the system finds a more expensive way to supply electricity.

The low estimates ignore the cost of building and running a gas station that just sits around a a spare wheel, randomly earning no money some of the time. They ignore the vast land area wasted and the long transmission lines. One study by Edison Electric in 2011 estimated that 65% of all planned transmission lines in the US were primarily going to be built for renewables. In the US that’s another $26 billion cost tossed on the invisible renewables BBQ.*

Greenstone et al look at retail prices state by state in the US as these RPS requirements came into action and followed them for the next 7 years.

They found three things: A 4% increase in renewables led to a price rise of 17% and the impost was wildly high compared to any remotely sensible cost-benefit analysis

1. Electricity prices rise after the RPS rules come in. After 7 years the prices are 11% higher, and after 12 years they are 17% higher.

2. The addition of renewables does reduce the “carbon intensity” of the system. But the cost is exorbitant. Across the 29 states and after 7 years it costs somewhere from $130 – $460 per ton of CO2 “saved”. In Obama’s reign the social cost of carbon was wildly overestimated at around $50 per ton, so the intermittent energy generators are orders of magnitude more expensive than doing nothing. Compare that to the Australian Dutch auction process called Direct Action (by Tony Abbott) which reduced carbon for under $14 a ton. The relentless push to use wind and solar to save the world looks like a late-night infomercial for the renewables industry. Even if the IPCC were right, and if there was a global carbon market to reduce CO2, no one would want to use renewable energy to do it. It’s too expensive.

3. That many of the states already had renewables (I’m guessing hydro) so the targets were already partly met. So the net increases in renewables were smaller than the gross target suggests. These targets were very small, averaging around 2% extra renewables after 7 years and 4% by 12 years.

Clearly, it doesn’t take many intermittent renewables to wreck the grid.

To put this in perspective, the RET target in Australia in 2020 will be 23.5% of Australia’s electricity generation.

That would be the gross figure, not the net gain.

Renewable Portfolio Standards (RPS) are the largest and perhaps most popular climate policy in the US, having been enacted by 29 states and the District of Columbia. Using the most comprehensive panel data set ever compiled on program characteristics and key outcomes, we compare states that did and did not adopt RPS policies, exploiting the substantial differences in timing of adoption. The estimates indicate that 7 years after passage of an RPS program, the required renewable share of generation is 1.8 percentage points higher and average retail electricity prices are 1.3 cents per kWh, or 11% higher; the comparable figures for 12 years after adoption are a 4.2 percentage point increase in renewables’ share and a price increase of 2.0 cents per kWh or 17%. These cost estimates significantly exceed the marginal operational costs of renewables and likely reflect costs that renewables impose on the generation system, including those associated with their intermittency, higher transmission costs, and any stranded asset costs assigned to ratepayers. The estimated reduction in carbon emissions is imprecise, but, together with the price results, indicates that the cost per metric ton of CO2 abated exceeds $130 in all specications and ranges up to $460, making it at least several times larger than conventional estimates of the social cost of carbon. These results do not rule out the possibility that RPS policies could dynamically reduce the cost of abatement in the future by causing improvements in renewable technology.

*Edited to clarify it was 65% of $40bn total in transmission line costs in the US.