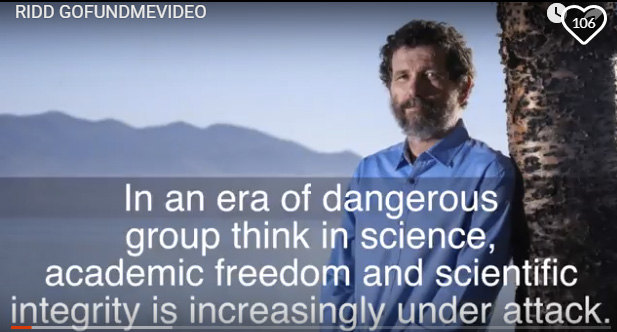 Brilliant. There is still some free speech in Australia, as long as you are willing to risk your career, 12 months out of action and a huge legal case. Peter Ridd wins on all counts.

Presumably James Cook will have to reinstate him, and he is now free to talk about the failure of replication in science and how our institutions may not be trusted. How many taxpayer dollars were fritzed defending the indefensible? Will Ridd get compensation? Will JCU staff get punished or sacked for  their war against science?

Thanks to Peter for fighting on when so many would have given up, and thanks to everyone who helped fund the case!

UPDATE: In reply, the Provost of James Cook Uni says Ridd was never gagged or silenced, nor sacked for his scientific views. Which would be great if it were so. But there’s a pattern here — how many skeptical scientists do they employ? Is that zero? We all know they went to great lengths to blackball, evict, and practically erase skeptical Prof Bob Carter too. If there are any skeptical scientists left at JCU, they are probably too afraid to speak out. Which is rather the point. Without some mea culpa, and a change of management, or some encouragement for skeptics to speak we have to assume that all research from JCU is tainted — we don’t know what the researchers won’t say or which results they daren’t mention.We don’t know what experiments they won’t dare do.

My lawyers have told me that the judge handed down his decision and we seem to have won on all counts.

It all happened very quickly and we had no warning , and because I live almost a thousand miles from the court, I was not able to be there. I have still not seen the written judgement and will update you all when I have that information.

Needless to say, I have to thank all 2500 of you, and all the bloggers, and the IPA and my legal team who donated much of their time free for this success. But mostly I want to thank my dearest Cheryl, who quite by chance has been my bestest friend for exactly 40 years today. It just shows what a team effort can achieve.

The next chapter of this saga must now be written by the JCU Council which is the governing body of JCU. What will they do about the VC and SDVC who were responsible for bringing the university into disrepute, not just in North Queensland, but also around the world. JCU crushed dissent, crushed academic freedom and tried to crush my spirit with their appalling behaviour. They only failed because I had your support. But if the JCU council does not act, they will be complicit in this disgraceful episode.

Attention must now focus on the JCU council.

I will update you shortly when I have more information, but for now I certainly have a spring in my step.

A penalty hearing will be set for a later date.