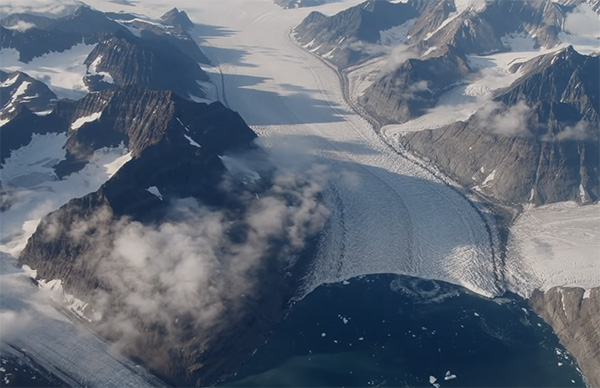 The Jakobshavn is the glacier that dumps more ice in the ocean than any other in the Northern Hemisphere. It made the iceberg that “sank the titanic”. It has been receding for years, and the losses were accelerating, but then it astonished the scientists.

“At first we didn’t believe it,” said glaciologist Ala Khazendar of NASA’s Jet Propulsion Laboratory. “We had pretty much assumed that Jakobshavn would just keep going on as it had over the last 20 years.”

“That was kind of a surprise. We kind of got used to a runaway system,” said Geological Survey of Denmark and Greenland ice and climate scientist Jason Box. “The good news is that it’s a reminder that it’s not necessarily going that fast. But it is going.”

Box, who wasn’t part of the study, said Jakobshavn is “arguably the most important Greenland glacier because it discharges the most ice in the northern hemisphere. For all of Greenland, it is king.”

But it’s OK, seriously, we’re all still going to bake in climate hell because all the models that didn’t see this coming are now saying it will be “temporary”. In a rush, climate-scientists hit auto-excuse-mode — saying the things they never say when there’s a bit of warming.

It’s such a quirk, a blip: in a spot 1000 km away the atmospheric pressure changed “resulting in either warming or cooling” (I don’t think the laws of physics are too happy about that) and then ocean currents carry that up to Greenland which affects the glacier. Sure. We never hear them work so hard to explain some temporary warming.

The cooling began in the North Atlantic Ocean, 966 kilometres (600 miles) south of the glacier, triggered by a climate pattern called the North Atlantic Oscillation (NAO): every five to 20 years, atmospheric pressure at sea level fluctuates, ultimately resulting in either warming or cooling, which is then carried northward by the ocean currents up the southwestern coast of Greenland.

So the grand coupled climate models didn’t predict the air pressure, the ocean currents or the glaciers, but apart from that…

But wow. That water is a lot cooler:

In 2016, the water in this current was cooler by 1.5 degrees Celsius, cooling the Atlantic around Greenland by about 1 degree Celsius; this made its way to the mouth of Jakobshavn, allowing the ice to thicken.

Ocean temperatures in the bay’s upper 250 m have cooled to levels not seen since the mid 1980s.

So 30 or 40 years of warming was wiped out just like that?

Get ready — Quote of The Year coming:

“We didn’t think the ocean could be that important,” OMG principal investigator Josh Willis of the Jet Propulsion Laboratory told National Geographic.

I wondered if Josh Willis’s job description was really the Oh My G*d principal investigator, but I see it may mean Oceans Melting Greenland (OMG) — except that isn’t happening.

He has to dig deep to explain how they got it completely, utterly, wrong:

“The thinking was once glaciers start retreating, nothing’s stopping them,” explains Josh Willis, an oceanographer at NASA’s Jet Propulsion Laboratory and OMG’s lead scientist. “We’ve found that that’s not true.”

So our top glacier experts are just discovering that glaciers come and go, that oceans are important and that CO2 is not their only driver? This is news to them?

He’s effectively throwing their own knowledge under the bus. It’s that bad.

It’s interesting that they are announcing this growing glacier now, just as they have “found the reason/excuse” but not for the last few years when it was growing but they didn’t have an answer. For free and with no grants, skeptic Tony Heller pointed out it was growing two years ago.

This research demonstrates that glacial recession is not a one-way trend, but it doesn’t show a reversal of climate change. It does indicate that the effects are a little more complex than we thought, but, ultimately, that bird has flown the coop.

“This cooling is going to pass,” Khazendar told National Geographic. “When it does, the glacier is going to retreat even faster than it was before.”

You will not believe, this will cause sea levels to rise:

While this is “good news” on a temporary basis, this is bad news on the long term because it tells scientists that ocean temperature is a bigger player in glacier retreats and advances than previously thought, said NASA climate scientist Josh Willis, a study co-author. Over the decades the water has been and will be warming from man-made climate change, he said, noting that about 90 percent of the heat trapped by greenhouse gases goes into the oceans.

“In the long run we’ll probably have to raise our predictions of sea level rise again,” Willis said.

The fastest-shrinking glacier in Greenland has made an unexpected turn.

Although it’s been melting for 20 years, the Jakobshavn Glacier in West Greenland – famous for producing the iceberg that sank the Titanic – has now started growing again. 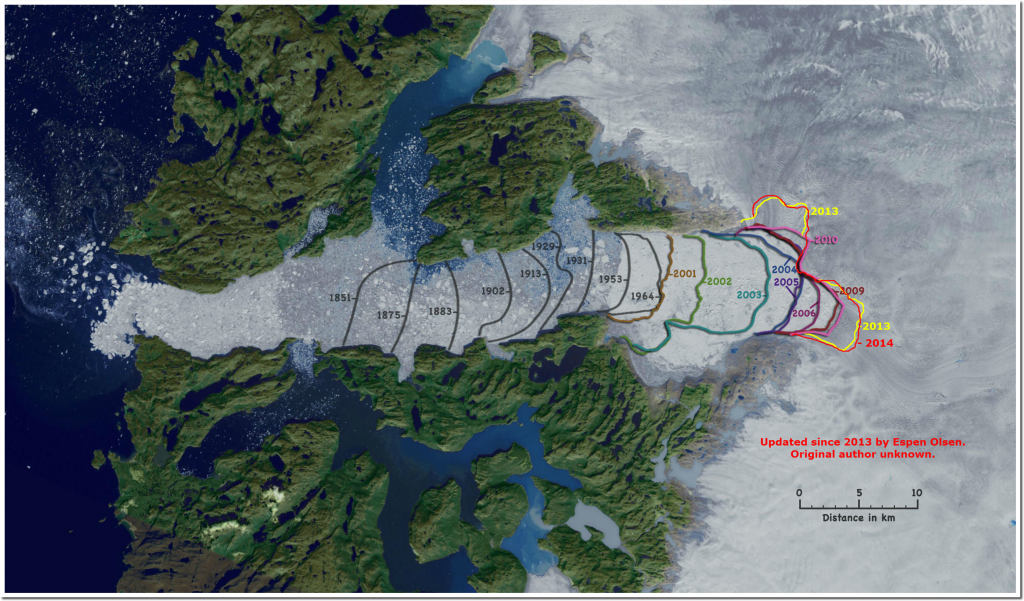 We even see the Precognitive-Preemptive-Headline – just in case you think that if shrinking glaciers prove the world is warming then growing glaciers must mean the opposite:

One Greenland Glacier Has Started Growing Again, But That Doesn’t Mean What You Think

What does this mean? Perhaps not much, but if the world was starting to cool, stuff like this would start to happen more often. No way to know that answer at the moment.

h/t Scott, and Sunsettommy for the Heller hint.