***UPDATED: Melbourne has been 42C or more around 50 times since 1855. That’s one in three years. Thanks to Bob Fernley-Jones for the correction.

They were only 250 million watts short: 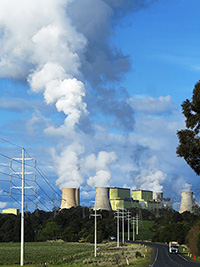 More than 200,000 Victorian households had their power cut off yesterday in a bid to protect the state’s energy system from shutting down, as the Andrews government was forced to admit there was not enough power to keep up with soaring demand in sweltering summer heat.

Homes were blacked out, traffic lights across Melbourne were switched off and businesses were forced to close for up to two hours after the Australian Energy Market Operator enforced rolling power outages to make up a 250 megawatt shortfall in supply.

The State Energy Minister (Lily D’Ambrosio) said there would “absolutely” be no blackouts this morning and the rolling blackouts started 90 minutes later. Welcome to the USSAustralia where we hope to make your 150th Birthday Party 0.001 degrees cooler but we can’t predict our electricity grid for the next hour and a half.

Dark ages — get used to it:

Greens leader Richard Di ­Natale blamed an over-reliance on coal for the heatwave and backed Ms D’Ambrosio’s calls for people to stop using their dishwashers and washing machines and to turn up the temperature on their air-conditioners.

That’s right, the man who thinks solar panels will protect your children from storms wants you to “be reasonable”.

We were told renewables would be cheap, would save the world, and power the nation. Now we’re told the lights will go out, we shouldn’t expect to run the dishwasher or air-conditioner at 7pm every day, and burning hundreds of millions of dollars for an afternoons electricity is just “part of the price”.

Once we were going to lead the world, now we are happy to be failing like everyone else.

Ms Zibelman said load shedding was common practice around the world. “All countries that I’m aware of, and again, I have been in the business for 30 years, and over periods of time you run into these systems like you have, where you have generators that go off and you have to do load shedding,” she said. “We can’t afford … 100 per cent reliability over all hours and all circumstances, but we do like to plan that for what we see these extreme weather events that we have enough reserves available. That’s really what we’re working towards.”

Victoria used to be able to “afford” reliable energy, until they got lots of cheap wind and solar power.

Now business can’t afford to set up in Victoria.

Australia used to be able to maintain coal plants too:

AEMO blamed the failure of two generators at the Yallourn coal-fired power station and ­another at Loy Yang A, all in the Latrobe Valley, for reducing supply by 1800MW.

For forty years Australia had cheaper and more reliable energy than this, and it was powered by what four letter word?

It’s being billed as wildly extreme, but Melbourne officially peaked at 42.8C. Bob Fernley-Jones looked back at the long Melbourne Regional Office data going back to 1855, and found around corrected “50” examples of a day of 42C or more. Days like this are one-in-3-year-event. This is summer in Melbourne. It’s not rare and any half-competent planner would plan accordingly.

As Bob points out the highest spikes in Jan ’39 and Feb 2009 are arguably outliers “resulting from freakish hot northerlies (and the most terrible Victorian bushfires).  If they are waived as outliers, then for the rest of the record from 1855 it’s all pretty dam flat?”

Temperatures recorded above 42C in Melbourne from 1855 to 2015.  (Regional Office)  Thanks to Bob Fernley-Jones.

Furthermore, this “42.8C” was recorded on an ultra sensitive electronic sensor which means it could well be a “one second record” that is artificially inflated compared to the same day as measured with a mercury thermometer which is slower to respond. The half hour observations in Melbourne peaked at 42.3C. The BOM could tell us exactly how long temperatures “peaked” for. Will they? They could tell us exactly how different the two thermometer types are, but Bill Johnston found they are destroying that data.

Seriously, officer, these two thermometers are exactly the same. Trust me. 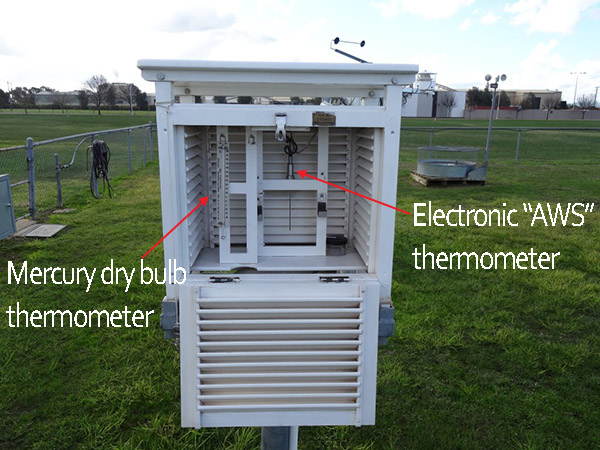 An example of different thermometers side-by-side in a Stevenson Screen.. Photo: Bill Johnston.

How much did it all cost?

Who will add up the electricity bill, the RERT (emergency scheme), the FCAS charges and the compensation payments?

This [RERT scheme] means paying smelters, factories and other heavy power users to rapidly curtail their energy use to rein in demand, when the system is under strain.

Who will add up the lost wages, the lost opportunities, and the jobs that never came to Victoria?

Whatever the bill, we know who will pay.