Sydney’s ‘catastrophic’ hailstorm happened on Thursday, the damage bill said  to top $125 million. How much of that damage is to rooftop Solar PV? The last massive hail storm in Sydney was in 1999 — but there were hardly any solar panels then. 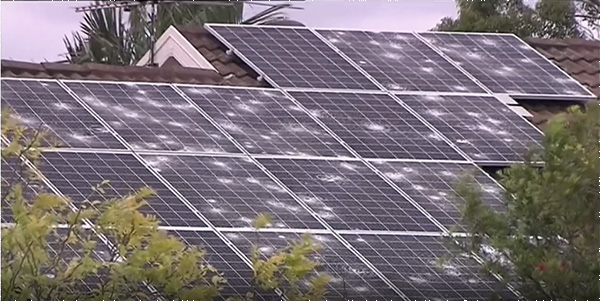 There are wild scenes and images everywhere.

At least 50,000 homes remain without power in northern Sydney and more than 1000 calls for help are waiting to be responded to by State Emergency Services after Sydney and the NSW central coast were yesterday rocked by the worst hailstorms in almost 20 years.

Before anyone yells “Climate Change”, Reader, Pat, found stories about hail the size of Eggs in Sydney in November 1929. Hail the size of Tennis Balls fell on Reids Creek near Brisbane in 1934 and hail the size of Tea Cups fell on Brookville in 1902. Paddington had “ice inches deep” on Nov 1, 1931. There are scores more Hail-the-size-of… Maybe building 2 million solar panels on a continent with hail the size of tea cups was not such a good idea?

It’ also quite difficult to tell just how bad the solar panel-related storm damage has been, but judging by the size of these hail stones, what solar panel wouldn’t break? If anyone can take photos for us that would be great.

We had quite a bit of a storm with large hailstones yesterday. #SydneyStorm If you look carefully there is a small section of green clouds. pic.twitter.com/Bv9G6nEFvr