It’s not often we see a report that turns things on their head quite like this.

Wind turbines may cause more local warming than global cooling in the next century. 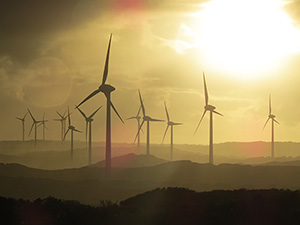 If the US were to install a lot of turbines, Wind power could warm the United States by 0.24 degrees Celsius instead of cooling it, because wind turbines “redistribute heat” in the atmosphere. They mix the surface layers. (0.24C would be equivalent to two decades of recent warming.) The largest effect is at night where wind plants can warm the local area by 1.5C.

At least 10 previous studies have now observed local warming caused by US wind farms. Keith and Miller compared their simulated warming to observations and found rough consistency between the data and model.

The new studies by Keith and Miller were published in Environmental Research Letters and Joule.

Major downer. The power density of wind energy is up to *100 times* less than predicted.

The new research suggests we can’t put too many turbines to close together or the whole group become far less efficient. That means we need 5 – 20 times as much land as previously thought (at least as thought by academics). Shame the US built 57,000 wind towers before they realized.

The power density of wind is just too low, and there’s an effect where the more we construct the worse it gets. A large wind shadow follows wind turbines, reducing the output from other turbines downstream. The larger the area of the wind plants, the worse their performance — the energy per meter squared falls by 75% as wind farms increase from 15km2 up to 150km2.

Wind is worse than coal for the environment in the next ten years?

Wind farms may be worse than coal for first ten years of operation, and increasing local warming for the first one hundred!  But hey, people one thousand years from now might be grateful.

The down side to wind power

What’s the discount rate on one thousand year time-frames?

On the one hand theoretically wind turbines cool the world, on the other hand, they warm the local area. Which effect wins?

We haven’t measured the outcome of a million wind turbines on planetary temperature. What if the assumptions of the effect of CO2 are wrong by a factor of a hundred too? Like, say, if the hot spot is missing, the rainfall estimates are skillless and the cloud cover predictions are voodoo?

If the USA builds lots more wind turbines it will have to wait a hundred years for any cooling effect?   |  Click to enlarge

Seriously. Wind won’t be “reducing “temperatures” for one hundred years?

Long after todays wind turbines have died, their great-grandchildren-turbines will amount to something.

The Harvard researchers found that the warming effect of wind turbines in the continental U.S. was actually larger than the effect of reduced emissions for the first century of its operation. This is because the warming effect is predominantly local to the wind farm, while greenhouse gas concentrations must be reduced globally before the benefits are realized.

Luckily CO2 emissions are irrelevant and mild warmth is probably beneficial. Who knows, if the sun cools us, wind farms might have some useful outcome, just not the one anyone expected. Can they keep the frost off crops?

The Harvard Gazette tells it as nicely as it can with a heavy seasoning of pro-renewables cliches. But the real implications are unsaid. Tucked far into the paper itself are some killer statistics. To power the US electrical grid based on the measured power densities wind power would have to cover fully 12% of the Continental land area. To power all the US energy needs wind turbines would have to cover 72% of the country.

The more wind plants we build the lower the power density will become.

Power densities clearly carry implications for land use. Meeting present-day US electricity consumption, for example, would require 12% of the Continental US land area for wind at 0.5 We m−2, or 1% for solar at 5.4 We m−2.

If wind was to replace all oil and gas for cars and as well as electricity wind farms need to cover 72% of total USA land area:

US electricity consumption is just 1/6 total primary energy consumption (BP 2018), so meeting total consumption would therefore require 72% and 6% respectively for US wind and solar.

Many nations have higher energy needs (per metre) than the USA.

In Germany Energiewende would need to grow to cover a quarter of all the country with solar panels to meet all primary energy needs. If they, crikey, cover the entire nation in wind turbines — they will still only supply 62% of German energy needs — at best:

Whereas for solar at 5.4 We m−2 , 24% of Germany’s land area would need to be devoted to commercial scale solar to meet total primary energy consumption

On Science Daily, the editors take that as a message that solar has some good points, since it uses the land more effectively than wind. This is their top summary paragraph — downplay the bad side, spin, spin, spin:

Extracting energy from the wind causes climatic impacts that are small compared to current projections of 21st century warming, but large compared to the effect of reducing US electricity emissions to zero with solar.

Wind Turbines are stirring up the air close to the ground:

In 2013 research, Keith described how each wind turbine creates a “wind shadow” behind it where air has been slowed down by the turbine’s blades. Today’s commercial-scale wind farms carefully space turbines to reduce the impact of these wind shadows…

What was missing from this previous research, however, were observations to support the modeling. Then, a few months ago, the U.S. Geological Survey released the locations of 57,636 wind turbines around the U.S. Using this data set, in combination with several other U.S. government databases, Keith and postdoctoral fellow Lee Miller were able to quantify the power density of 411 wind farms and 1,150 solar photovoltaic plants operating in the U.S. during 2016.

“For wind, we found that the average power density — meaning the rate of energy generation divided by the encompassing area of the wind plant — was up to 100 times lower than estimates by some leading energy experts,” said Miller, who is the first author of both papers. “Most of these estimates failed to consider the turbine-atmosphere interaction. For an isolated wind turbine, interactions are not important at all, but once the wind farms are more than five to 10 kilometers deep, these interactions have a major impact on the power density.”

Wind has a higher capacity factor (it works more often), but solar has a higher power density (uses less land). 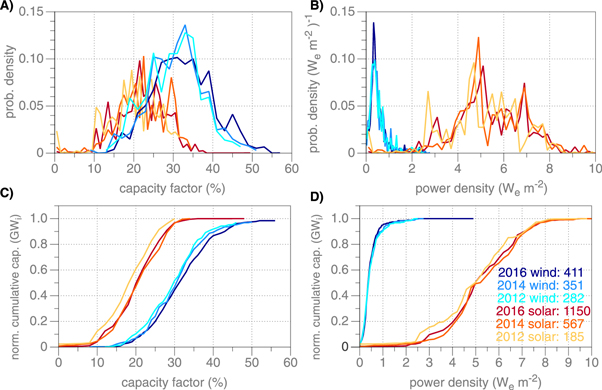 Figure 3. Distributions of capacity factors and power densities. Probability density functions(A),(B) over all wind and solar power plants; and, cumulative distribution functions of the normalized aggregated capacity (C),(D). In each case, annual average data for 2016, 2014, and 2012 is plotted, with the colored key in (D) clarifying wind from solar and the specific year.

Or put another way, they are both horrible for different reasons. But they’re also horrible together for their intermittency, their expense, and the vandalizing effect they have on the good parts of the grid.

A whole bunch of experts were wrong

For wind power, estimates of the power density vary by about a factor of 70.

For solar photovoltaics (PV), estimates of the power density differ by about a factor of 12. From  3–9 We m−2  up to  120 We m−2 if such sunny flat regions were blanketed with today’s highest (~40%) efficiency PV panels.

Power density statistics for the diehards

For solar energy, the average power density (measured in watts per meter squared) is 10 times higher than wind power, but also much lower than estimates by leading energy experts.

The energy produced per m2 shrinks to a quarter as the size of the wind installation spreads across the land:

While many wind power plants with areas less than 15 km2 generate more than 1.0 We m−2 , power density decreases with increasing power plant size. This result was previously observed for 0–20 km2 wind power plants by (MacKay 2013a). We verify this early result, and extend it by showing that wind’s power density reaches an asymptote of about 0.25 We m−2 when the wind farm area exceeds about 150 km2 .

Compare that to the power demands per m2 of large cities

Be grateful for small mercies: