The job of ABC environment reporters is not to serve the public and ask scientists hard questions about whether we can rely on their climate models that fail 98% of the time and on every scale in time and locality.

Instead their job is to be fiction writers, converting failing models into vomiting babies:

Under IPCC forecasts babies born today will be 22 when warming hits 1.5C. What will life be like?

She came into the world screaming, before projectile-vomiting over the hospital floor and falling asleep.

For this the ABC gets $3 million dollars every day.

We are talking about a half degree Celsius of warming spread over 22 years. This is double the decadal rate currently shown by satellites. But even if we assume that climate models are right for the first time ever, and this dramatic change in trends occurs, it’s still only half a degree more in a world where humans live from minus 50C to plus 40C and every day temperatures vary by 10 – 20 degrees.

Keeping things alive in the garden at these temperatures is next to impossible. Plants are pushed beyond their thresholds and die from heat shock. The animals that eat them go soon after.

Death to kangaroos, cows and camels then? Or maybe the native saltbush and scrub will do just fine like it always has, even when Alice was hotter than now 7,000 years ago for hundreds of unending relentless years during the Holocene Optimum.

Is Nick Kilvert talking about animals that eat lettuce and roses in back yards (humans, puppies, feral rabbits?). Or did he just segue from gardens to all plants, to all animals? Ahh details. Who needs em.

When she flicks over to the weather from reruns of Spicks and Specks, there’s fewer regional towns on the map than she remembers.

Moving to Darwin is out of the question. So is north Queensland. It’s too hot and there’s no jobs in hospitality. Tourism is suffering along with the reef.

Most of the reef is dead or dying in the north. Some of the hardier coral species have survived, but the diversity and colour are gone and no-one wants to snorkel in algae.

There’s still some OK patches of reef further south, but if warming goes up to 2C, scientists say it’s all going to go.

To escape the heat, moving to south-east Queensland seems like her best option.

It’s a choice between the Gold and Sunshine Coasts, but deadly Irukandji jellyfish are showing up more often in the summer on the Sunshine Coast.

The only thing we know for sure is that never ever in a million years does CO2 do one beneficial thing — like green the world, stop deserts, grow more food or help plants survive droughts.

Shall we kill people or save them?

On average, every 12 hours for the last ten thousand years, the temperatures vary in Alice Springs by around 16 degrees C. Somehow humans survive this extreme hourly climate change, mostly by switching on the air conditioner. But if it gets half a degree hotter over 20 years, humans will have to leave.

In Australia’s five largest cities, 475 people die from heat-related deaths each year — more than double the year she was born.

Because Nick Kilvert was trained by the Australian Government in school, at uni and at the ABC he does not yet know how to do internet searches for things like “winter deaths”. If he did, or if he was especially lazy and just emailed Jo Nova to do his research for him, he would be able to tell the paying taxpayers he is supposed to serve that every year in Australia the big climate killer is winter which causes 7,000 excess deaths.

So while warming might kill 200 people a year in 2040, it will save far more people than it kills.

A lack of air conditioning will kill more people than global warming. Obviously what we need, if you care about lives, is more Victorian Brown coal plants.

Nick Kilvert is an environment reporter who may or may not realize that Australian rainfall has increased. If CO2 has any effect on rainfall, it’s made more of it. But whatever, as luck would have it, more rain definitely won’t fall in the right place or at the time — thus we get more droughts and more floods. And we know this because skillless climate models say so.

She was 14 the last time the Todd River flowed. But when it did it was a raging torrent.

Apparently that’s a thing. Hot air can hold more moisture. So it takes longer for it to get saturated enough to rain. But when it does …

Does he realize that “more moisture” in the air means there will be less extreme heat and cold? (That’s what the greenhouse effect is supposed to do).

Mostly though, it’s just dry. Alice was already hot and dry, so it doesn’t really have anywhere to go but hotter and drier.

Cotton crops along the Murray-Darling in southern Queensland and New South Wales aren’t planted when there’s long drought. And the wheat belt suffers.

Russia’s wheat industry is going gangbusters though. Good for them.

If you get the urge to take Nick Kilvert investment predictions and do the opposite, check out Cool Futures.*

The big question: If we cut ABC funding back to the level of starving bloggers, will Nick Kilvert learn to use the BOM website?

Back when CO2 was ideal Alice Springs had a shocking run of dry years. Lord save us all from extra rain in Alice Springs. 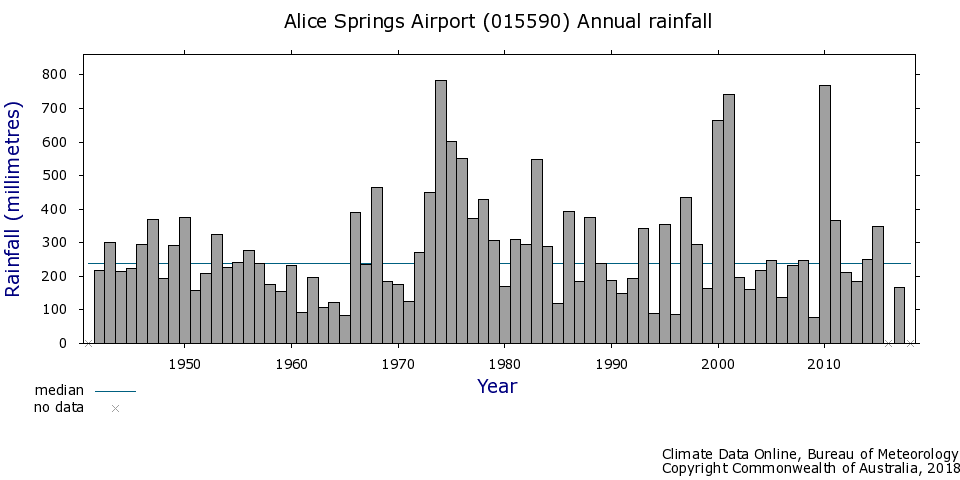 One hundred years of data shows Alice Springs was always dry with intermittent flooding. Obviously this data needs to be adjusted. 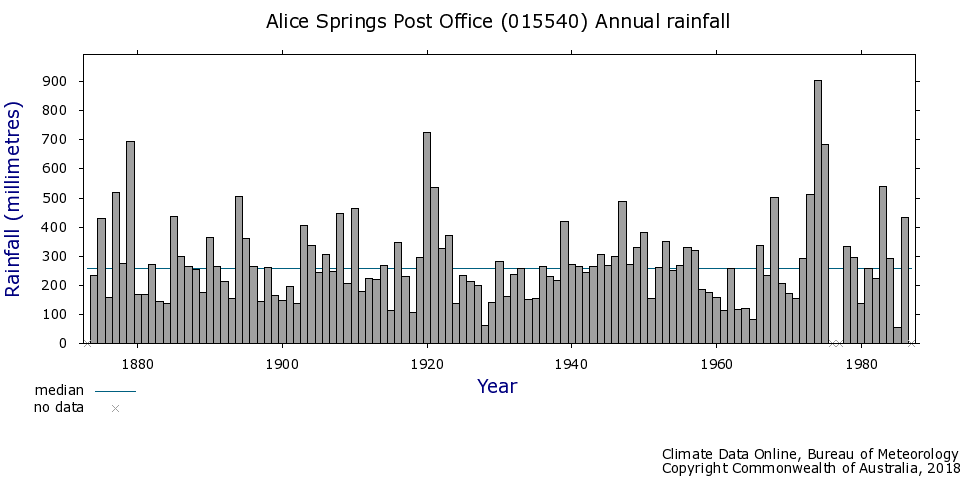 The ABC is unaccountable and out of control.

If you think that should change, please help support independent commentary with some emergency chocolate through Paypal or direct deposit and mail.

*Declaring a conflict of interest, David and I are involved already with Cool Futures and hope one day to profit from it. I’m looking forward to the day when Nick Kilvert declares a conflict of interest and admits he, and all the climate scientists and renewable firms he does free advertising for, get fatter salaries from fatter governments. Will he ever report how incompetent big government is?