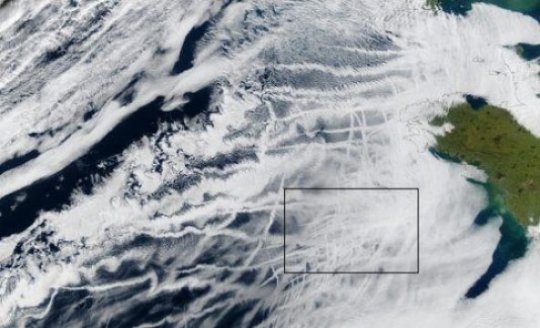 Ships leave a trail of sulfur dioxide in the sky behind them which seeds clouds and causes cooling. At the same time, black soot drops out on the arctic ice, absorbs sunlight and causes warming. So which effect is bigger? Scott Stephenson et al tried to figure out that out and the cooling effect won.

The researchers also factored in global anthropogenic (human-caused) greenhouse gas concentration trajectories, adopted by the International Panel on Climate Change (IPCC), at a level closely aligning with today’s trends, along with global economic output that will drive the transport of goods.

“We attempted to fully integrate the interactions between the various components of the climate system in ways that have not been done before,” Stephenson says.

The main result was that the cooling effect won out over the warming effect in the simulations, to the tune of about one degree Celsius.

Zowie. One real degree of Arctic cooling sounds like rather a lot — even undoing greenhouse gas warming as well as soot based warming.

The cooling effect stops if we clean the smoke stack and remove the sulphur particles. Presumably the warming effect would also stop if we scrubbed out the soot. And there would be no effect at all if we converted most boats to nuclear bulk container ships. (Though some land-based snowflakes at Yale would melt.)

Don’t look now, but sulfur pollution is saving the Arctic

Having found such a politically awkward result the don’t-pick-on-me caveat comes next.

The researchers warn that we must not rejoice, even though Arctic shipping lanes may be 40% shorter, faster and more fuel efficient, because global warming will still be awful, and boats may have accidents in the Arctic. The environmentally better option is, apparently, to have those shipping accidents elsewhere, like, say, British Columbia?

The Arctic continues to warm at twice the global average, and though increased shipping will likely have a cooling impact on the region, the researchers stress that these results should not be interpreted as an endorsement for Arctic shipping, especially as a potential solution to climate change.

Stephenson notes that while trans-Arctic shipping routes would cut travel time by as much as 40 percent, growth in shipping traffic would mean heightened risk of oil spills and clearer access to extractable resources such as oil, gas, and minerals in the region — all scenarios that come with potentially dire environmental consequences should an accident occur. With fewer amenities within reach to respond to a potential disaster, responders would be faced with huge logistical challenges to deal with those scenarios.

“There are clear economic benefits to shipping in the Arctic, with shorter routes and less fuel being burned,” he says, “but there are also enormous potential risks.”

Additionally, the cooling could be offset by international regulation and trade agreements, for instance if planned global limits on sulfur emissions from fuel used by the ships go into effect. Without the sulfur-induced cloud formation, the cloud-driven cooling effect will not happen.

Anyhow, file this one away when Arctic disaster stories arise, or people recommend some expensive geoengineering. If the Arctic warms too much, we can just send more shipping traffic. And if we overdo it, the problem will sort itself out. No more shipping lanes.

Of course, if another little ice age is coming, the last thing we want is to cool the arctic.