Hurricanes aren’t what they used to be.

Tony Heller at RealClimateScience found a photo of what happened when “an actual category four hurricane hit Miami” — as opposed to an almost Cat 6 that became an almost Cat-Nothing. 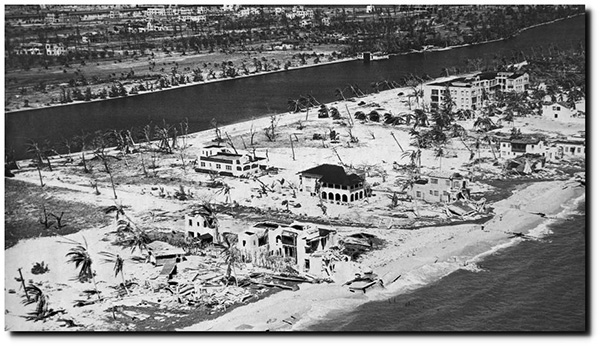 At one point Florence was “Becoming The Strongest Storm to Ever Make Landfall North of Florida” and the “costliest ever to hit The US.”

Imagine if this happened in 2018. The outrage, the scandal. Impeach Trump Now.

On the other side of the world on Sept 20th 1926,  The Melbourne Herald reported: 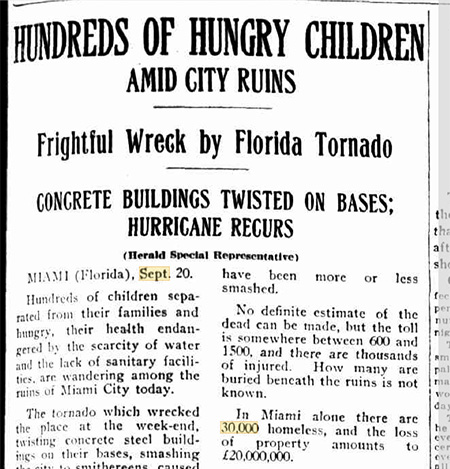 Thankfully we have and do things better now.

The people of Miami didn’t have satellites or TV or helicopters or mobile phones, or perhaps any phones.

“Hundreds of children separated from their families and hungry, their health endangered by the scarcity of water and the lack of sanitary facilities, are wandering among the ruins of Miami City today.

The tornado which wrecked the place at the week-end, twisting concrete steel buildings on their bases, smashing the city to  smithereens, caused the worst disaster America has known since the San Francisco earthquake. All towns in the south eastern coastal belt of Florida have been more or less smashed. No definite estimate of the dead can be made, but the toll is somewhere between 600 and 1500, and there are thousands of injured. How many are buried beneath the ruins is not known.

In Miami alone there are 30,000 homeless, and the loss of property amounts to £20,000,000. The disaster has been aggravated by a hurricane which today struck Pensacola, at the head of the Gulf of Mexico. The wind blew at 100 miles an hour. The place is isolated.

Most of the wooden structures of the city had been unroofed or had collapsed. Practically every piece of plate-glass in thc city was broken.

The death toll in 2018 due to Florence has sadly reached 42. Deaths in 1926 in Florida and the Caribbean were estimated as somewhere from 372 — 539 + and about 43,000 people were left homeless. This is not to dismiss the heartache of the current struggles, but exploiting the victims to sell fake insurance doesn’t help anyone.

The toll for the storm in the United States was $100 million ($1.38 billion 2018 USD). It is estimated that if an identical storm hit in the year 2005, with modern development and prices, the storm would have caused $140–157 billion in damage ($196 billion in 2016); this would make the storm the costliest on record in the United States, adjusted for inflation, if it were to occur in contemporary times.[1][2]