The Hockeystick graph rewrote history and was used to justify billions of dollars of expenditure. The people who created it were public servants dedicated to science and writing businesslike emails to each other — which is why they fought tooth and nail and with hundreds of thousands of dollars for 1,763 days to stop you reading them.

Marvel that after 1,000 years of working as thermometers, trees suddenly decalibrated in 1961 just as our national networks of adjistimongered-thermometers were established. See that red line rise… 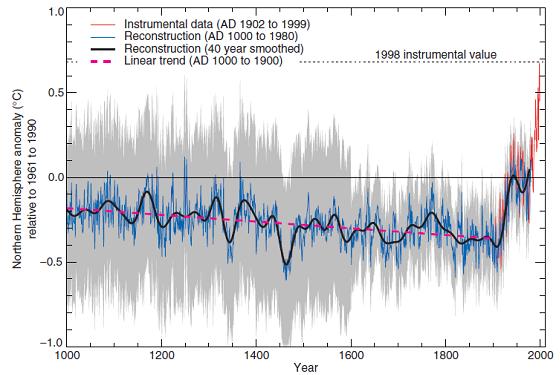 One thousand seven hundred and sixty-three days ago, on behalf of its client, the Free Market Environmental Law Clinic, PLLC (FME Law) asked the University of Arizona to hand over public records that would expose to the world the genesis of what some consider the most influential scientific publication of that decade – the Mann-Bradley-Hughes temperature reconstruction that looks like a hockey stick.

“This decision by the Appellate Court is much more than a small procedural action,” said Dr. David Schnare, the member-manager of the Free Market Environmental Law Clinic, PLLC, who is prosecuting this case. “We asked for the full history of the hockey stick graph and much more. We sought the history of the fourth Intergovernmental Panel on Climate Change Report and the discussions among the scientists as they discussed climate papers and the then burgeoning antagonism between climate scientists not of like mind.” Chaim Mandelbaum, Executive Director of FME Law explains, “This case is not over, but we appear to be at the beginning of the end.”

Dr. Schnare described the status of this case and its importance. “We did not take this case only to obtain the history of a very controversial period of time in the climate wars. We also took this case to cast sunlight on how public universities work, how they contribute to the formation of public policy, and how professors behave within the policy arena. Core legal issues remain before the court – particularly about how to protect the research process while still allowing the public to learn how this sector of the government works. The University’s appellate brief is due on July 30th, our answering brief is due on September 7th and any reply from the University comes after that. We won’t have a final appeals court decision on the merits of this case until late in the year, and then it will be on to the Arizona Supreme Court.”

In the meantime, the documents will have to be handed over. Dr. Schnare and his staff will take the first look at those documents. With a doctorate in environmental management and decades of experience in policy formation, he, with the assistance of FME Law staff, will sort these documents, organize them for use by the public and prepare a report on what they contain – so to speak, a chronical of that historic time, based not on cherry picked emails but on the full history as available in the public record. They will then turn over the public records and their report to their client who is expected to make them available to the public.