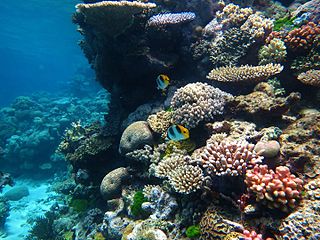 After half a billion million years of climate change, I’m shocked, shocked I tell you, that life on Earth (and specifically corals) have so many ways to cope with the climate changing. After all, it’s natural (if you are trained by Greenpeace) to assume that corals can only survive in a world with one constant stable temperature just like they never had.

One more tool in the coral-reef-workshop

Corals don’t just have a tool-box, they have a Home Depot Warehouse. h/t to GWPF

We already knew corals chuck out the symbionts that don’t work so well and pick up better partners. Plus, evolution  left a stack of genes lying around that were honed  in a world that was warmer, and natural selection has a way of amplifying better combinations as conditions shift. Then there is the way corals can be reseeded from safe sites, far away. Now we find out that corals can use epigenetics too.

Epigenetics is that kind of spooky effect where people can inherit the exact same DNA code yet it works or doesn’t work depending on whether it was Dad’s copy, or Mum’s, or whether parents were starved, fearful or stressed. It’s weird, see more on that below.

It’s an extra layer of information above and beyond the DNA code which is strictly just A, C, G’s and T’s in a four letter alphabet. Each section of DNA can also be compressed, zipped, or tagged with a methyl group so it is “archived” but not readily available. For example, we’ve got a copy of every gene in every cell, but obviously a liver cell has a bunch of genes that are “switched on” that are different to the suite of ones turned on in, say, skin cells. So it is with corals. During a heat wave, they switch on some inactive genes, and when hit with another heatwave soon after, they cope much better in the second round. People wondered if corals could do the epigenetic tricks which animals and plants do, and surprise, evidently, they can. We still haven’t confirmed whether those changes are inherited (which is pretty important, since the definition of “epigenetics” has itself evolved to mean “heritable”, at least in the rest of the animal kingdom). Since baby corals can evidently learn from lessons that happened to mummy corals I presume that epigenetics in corals is inherited and finding evidence of that is just a matter of time.

Anyhow, bowl me over, after millions of years of evolution in a turbulent ocean where temperatures and pH can vary by degrees in a single day and in every season, corals can cope with a smaller change, spread over a century.

They [Liew et al] placed colonies of the smooth cauliflower coral, Stylophora pistillata, in seawater aquariums with varying acidity levels for two years. Ocean acidification is a consequence of climate change and hinders the ability of corals to produce the calcium carbonate skeleton they need to maintain their structures. The researchers hypothesized that DNA methylation might allow corals to mitigate these effects by changing the way they grow.

After two years, the team sequenced the genomes of the corals and determined changes in methylation patterns.

“We noticed that corals grown under more acidic conditions had higher levels of DNA methylation,” says geneticist Yi Jin Liew. “Genes with increased methylation were related to cell growth and stress response, but not to calcification as we initially proposed,” he says.

The team next plans to investigate whether these epigenetic changes can be passed down to future generations. “The idea is fairly revolutionary,” says Liew.

Hidden in an old BBC story about a researcher who thinks corals that survived catastrophic asteroids now need to be micromanaged by homo sapiens (the hubris!) is this this tidbit about some of the mechanisms, and also a clue about how broad the genetic tool-kit is:

In the Samoan corals, for example, out of 16,728 genes investigated, the activity of 74 changed significantly when placed in elevated temperatures. Although many have unknown functions, some produce so-called heat shock proteins that stabilise vital chemical processes, binding to other proteins that have been misshapen by stress and bending them back into working order. “They’re like protein chiropractors,” says Palumbi.

Heat-shock proteins are good for us too. They are handy weapons I’ll be talking about more soon. They may help us live longer.

If the activity of 74 genes is changed under heat, that is a pretty complex response. That raises the question: if epigenetics controls the genes, what controls the epigenetics? How does a cell know to activate or archive the right 74 genes?

Here’s an interesting video if you want to know more about epigenetics:

The Spooky effects of Epigenetics, thanks to Wikipedia

There are some seriously weird things going on.

Hungry boys are more likely to go on to have grandchildren with less heart disease?

In the Överkalix study, paternal (but not maternal) grandsons of Swedish men who were exposed during preadolescence to famine in the 19th century were less likely to die of cardiovascular disease. If food was plentiful, then diabetes mortality in the grandchildren increased, suggesting that this was a transgenerational epigenetic inheritance.The opposite effect was observed for females—the paternal (but not maternal) granddaughters of women who experienced famine while in the womb (and therefore while their eggs were being formed) lived shorter lives on average.

Freaky weird — can a phobia be inherited?

Studies on mice have shown that certain conditional fears can be inherited from either parent. In one example, mice were conditioned to fear a strong scent, acetophenone, by accompanying the smell with an electric shock. Consequently, the mice learned to fear the scent of acetophenone alone. It was discovered that this fear could be passed down to the mice offspring. Despite the offspring never experiencing the electric shock themselves the mice still display a fear of the acetophenone scent, because they inherited the fear epigenetically by site-specific DNA methylation. These epigenetic changes lasted up to two generations without reintroducing the shock.[143]

Even twins can drift in epigenetics – archiving different genes as they age:

In this case, only healthy twin pairs were studied, but a wide range of ages was represented, between 3 and 74 years. One of the major conclusions from this study was that there is an age-dependent accumulation of epigenetic differences between the two siblings of twin pairs. This accumulation suggests the existence of epigenetic “drift”. Epigenetic drift is the term given to epigenetic modifications as they occur as a direct function with age.