Hands up who knew that Greenland has been pretty much the same temperature for the last hundred and forty years?

We know that there has been massive melting ice, shrinking ice sheets, a dark zone that is a huge problem, that the melting is accelerating, faster than at any time in the last 400 years. We all know “this is scary”, and due to climate change and could raise sea levels by 20 feet. And that’s just the news stories in the last two weeks.

At NoTricksZone, Kenneth Richards has found an up to date graph of Greenland temperatures  buried in the supplement of a new paper by Mikkelsen et al., 2018:

So Greenland hasn’t been showing signs of warming since man made CO2 started rapidly rising after World War II. Indeed Greenland has been not responding to CO2 for 140 years or maybe a million.

Serious researchers have known this for years. It’s not like a flat trend suddenly popped up to surprise us.

Hat tip to Bob FJ for sending graphs and links of earlier studies last year. Even far back in 2004, it was obvious Greenland was not warming like it was supposed to. That hasn’t stopped flocks of researchers and journalists from not mentioning it. This story is just as much about the media as it is about Greenland.

Figure 1 shows the IPCC near-surface air temperature record for Greenland, which includes a highly statistically significant cooling of 0.11°C (0.20°F) per decade over the past 64 years! 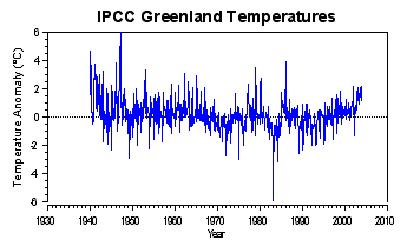 For the record, GISS graphs of separate Greenland stations are behaving in cyclical patterns. Paul Matthews suggested in 2015 that the cycles matched up with the AMP (Atlantic Multidecadal Oscillation).