The fear is palpable

How much fun can you have living in a global experiment?  In Australia, peak summer is about to hit in a post-Hazelwood-electricity-grid.  There’s a suite of committee reports as summer ramps up. Everyday there’s another Grid story in the press, and a major effort going on to avoid a meltdown.  Minister Josh Frydenberg announced today that “we’ve done everything possible to prevent mass blackouts”. Or as he calls it, a repeat of the South Australian Horror Show.   Politicians are so afraid of another SA-style-system-black that they are throwing money: The “Snowy Hydro Battery” will be another $2 billion. Whatever. It’s other people’s money.

This is what they are afraid of:

The red bars mean “Reserve Shortfall”. The dark blue matter is “Generation”. The graph covers two years (sorry about the quality) so the two red bursts are summer 2018 and summer 2019.

Oddly we are headed for a critical time, but this’s the most recent graph I can find  — thanks to Wattclarity —  from November 16th, 2017. (Here’s an earlier version from March 2017. and from Dec 2016). Perhaps there is a newer kinder forecast, but curiously the AEMO Medium Term Outloook page isn’t working “til early 2018”. Hmm? Odd time to take it down.

The words in that top box (rewritten below*) indicate they do a new outlook every two weeks, but I can’t find one on the Wayback Machine, or Google Cache. Perhaps you can? Please let me know.

The ABC tells us prices look set to fall:

The Australian Energy Market Commission (AMEC) said the price drop will happen as variable wind and solar generation comes online, which is paid for by the Government’s Renewable Energy Target.

Notice how in the government funded ABC, “the Government” appears to pay for many things, almost like it generates income? More accurately, the Government’s Renewable Energy Target forces customers to pay more for electricity from coal and gas producers, which in turn, give that to the intermittent generators.

Nationally, prices rose almost 11 per cent this year, but with the extra supply from wind and solar, the commission predicts that will be offset by a 12 per cent fall over the following two years.

The world is full of paradoxes. Everyone is paying more for electricity yet the cheapest generators are going out of business

Wholesale electricity prices in Australia are higher than ever and headed for the sun, averaging in the $100/MWh range. Yet the AMEC report somehow found “that over time, low wholesale prices contributed to the closure of coal-fired plants”.  Could it be that the gap between the reality of the wholesale prices the retailers pay and the wholesale prices the coal plants receive has something to do with the LRET (Renewable Energy Target) which is currently around $85MW/h?

Seems the more free energy we get from the wind and sun, the higher the prices rise.

Ten days ago a Goldman Sachs report warned that people are underestimating the future price rises coming in Australia.

NSW and Victorian wholesale power prices are set to rise as much as 50 per cent in coming years, boosting profits at energy giants AGL and Origin, as peaking power that requires high prices to start is increasingly required to back up renewables.

This is the view of analysts at investment bank Goldman Sachs, who say a recent softening in electricity futures prices is underestimating a coming price shock by 20-30 per cent, even if the National Energy Guarantee is put in place. “We forecast wholesale electricity prices will rebound towards a new peak of between $120 and $130 per megawatt hour,” Goldman Sachs analyst Baden Moore said in a note to clients.

GoldMan upgraded the profit forecast for AGL and Origin. 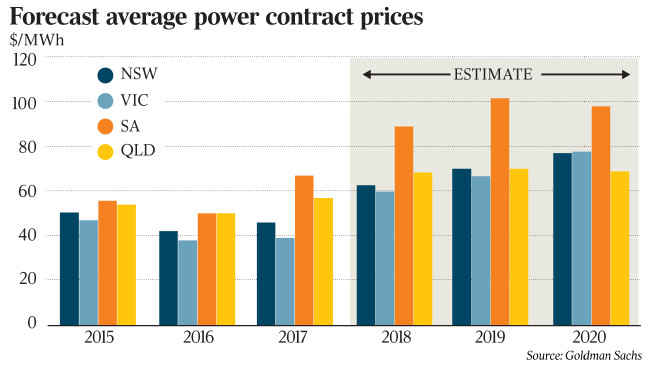 StopTheseThings argues that Australia’s Energy Transition is leaving 42,000 families in Abject Energy Poverty. (Despite that suffering, it must be reassuring to know that thanks to the energy “transition”, storms will be slower in 2100. )

Sydneysiders are being warned of chaos, unprepared for a blackout

The Energy Security Taskforce Report is chaired by NSW chief scientist Mary O’Kane. Today it is getting headlines:

Up to 10,000 Sydney commuters on underground trains would have to be evacuated, surface roads would be gridlocked and ferries may have to move ­people out of the CBD in the event of a “black’’ power event of the type that hit South Australia last year. — Sid Maher, The Australian

Meanwhile, public hospitals only have six hours worth of fuel in their back-up diesel generators, the report found. — news.com.au

The NSW Energy Minister Don Harwin says a lblack system event is highly unlikely because the last one occurred in 1964:

Mr Harwin played down the possibility of a black event. “NSW has not been subject to a black event for 53 years — so it is highly unlikely that such an event will occur.

Are you feeling reassured?

That’s possibly 9 – 15 hours without power in a city of five million people:

It [the Energy Security Taskforce report] said anecdotal evidence suggested that in a black system Sydney would be without power for at least nine to 15 hours, probably longer, and would be one of the last parts of the state to have power restored to customers. This was because the Sydney CBD physically lay at the edges of the network in relation to the main generators.

The same article goes on to point out that there are no planned communications mechanisms for a black system, though the RBA, ASX, and banks would cope because they “had structured their communications platforms so that they were not reliant on the National Broadband Network [NBN] and would still be operational during a blackout.”

Our newspapers are going into the gory detail of blackouts in our largest city:

NBN equipment would not operate in a blackout but customers with fibre to the premises and a power supply with battery pack-up would be able to operate their devices for approximately five hours. Houses with fibre to the node, fibre to the building, cable and fixed wireless would not have operable internet or phones. The report said public hospitals in NSW had back-up diesel gener­ators but fuel would need to be ­delivered within six hours.

Perhaps someone can explain to me again why we are spending $74 billion on the NBN? And if you are admitted to hospital in Sydney, perhaps bring some diesel with you — just in case the backup trucks don’t get there in time.

One way to hopefully prevent a blackout is to manually load shed. Which is the nice term for deliberate blackouts –but  note the costs:

There were “significant gaps in knowledge, preparation and planning for black system event in NSW’’ and costs could be as much as $136 million for every 200MW of load shed in the CBD for four hours.

The NSW Grid uses around 9,000MW (or more). The $136m cost mentioned above is for 200MW for four hours. If things really go pear-shaped, open the vault doors and watch money exit at light speed.

Toss another $4b at the problem created by renewables?

If energy is not stored in fossil fuel form, the alternate storage methods are, breathe, expensive. We thought the big Snowy Hydro battery was expensive, but it’s suddenly twice the price:

Prime Minister Malcolm Turnbull’s much-hyped ‘Snowy 2.0’ expansion has been given the green light, however the scheme could cost 125 per cent more than first thought and won’t be switched on for at least six years.

The expansion had a tentative price tag of $2 billion, however new documents show the cost could actually end up as high as $4.5 billion – not including the estimated $2 billion also needed to upgrade transmissions lines from the mountains into Sydney and Melbourne.

For this kind of money we could start talking about actual generators like USC  coal plants or nuclear plants, things that Indonesia already has or is planning to get. The Snowy pumped battery uses energy to push water uphill, so it can get some of that energy back later. (That’s another story for another day).

Finally we find out the Basslink Interconnector Cable broke because it was run “too hot”:

It was one of the most spectacular debacles in the world of modern electrical grids. Basslink is the underwater interconnector between Tasmania (home of Hydropower) and Victoria (former Brown Coal king of Australia, but “transitioning” to unreliables fast). When the cable broke in December 2015, it cost Tasmanians $560m, took 5 months to repair. They had ran their low dams down to get rich selling “low carbon” electricity to Victoria, but shut their last gas plant only a few months before. An El Nino was running, so their low dams weren’t restocked until May or June. In the meantime they flew diesel engines across en masse to keep the lights on. The whole episode was capped off by the incident where Tas Hydro saw a major storm coming, with flood warnings and decided it was a good time to try cloud seeding. Greed anyone?

The Basslink Cable was supposed to allow 630MW of energy to go back and forth, but according to Tas Hydro can only deal with 500MW.

“BPL believed its cable could safely and reliably operate at 630MW for extended periods without overheating the copper and insulation and causing an unreasonable likelihood of failure,” Mr Davy said.

“Unfortunately, they were wrong. The expert reports note that the cable, as designed and constructed, cannot meet the minimum operating requirements.”

There goes another 130MW Victoria was hoping to use in peak hours over summer:

“Victorians have been expecting to rely on 630MW of peak power over summer, and if that’s reduced to 500MW that will have significant impacts on how Victoria sources that power on the hot days of summer,” he said.

Words in the top box of the AEMO Medium Term Outlook.