It’s not even close: If South Australia seceded it would have the highest electricity price of any nation on Earth.

South Australian households are paying the highest prices in the world at 47.13¢ per kilowatt hour, more than Germany, Denmark and Italy which heavily tax energy, after the huge increases on July 1, Carbon + Energy Markets’ MarkIntell data service says.

When the eastern states’ National Electricity Market was formed in the late 1990s, Australia had the lowest retail prices in the world along with the United States and Canada, CME director Bruce Mountain said.

Wind energy is “free” but countries with the most wind power are also the most likely to get to the top of the Prize Pool for exorbitant electricity. Wind energy penetration is highest in  Denmark (1st), Portugul (8th), Ireland (6th), Spain (11th), Germany (3rd). Conversely, renewable energy penetration is low in places at the tail end of the price curve like Luxemburg 6%, Estonia 15%, Hungary 7%, Lithuania 15.5%. In the low mid price range is France with 80% nuclear generation, and Finland which is 47% Nukes and Hydro.

Could be a message there?

If South Australia were on the graph of wind penetration below it would be equal second at 30%. 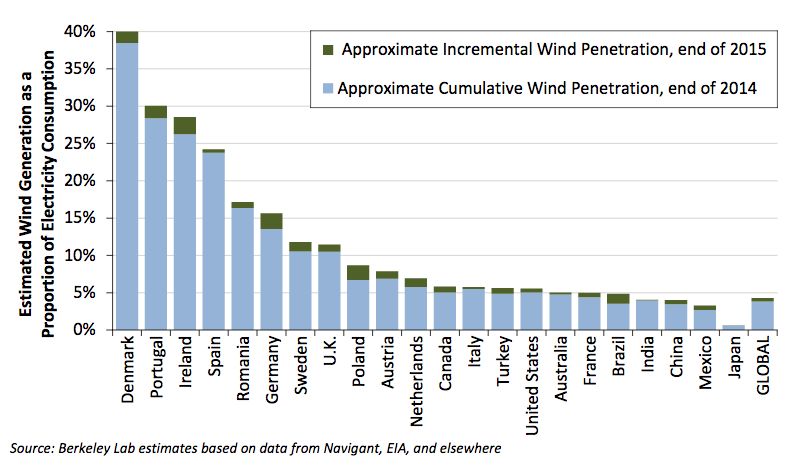 The end cost of electricity is not just decided by the amount of wind power as a percentage of the grid. Australia as a whole is a stand out – despite having wildly expensive electricity, it only has (as a whole) 5% wind. using 83% fossil fuel sources, it In NSW, Victoria and Queensland, most electricity is generated from fossil fuels. Nor is the cost of electricity due to “renewables” alone, because hydropower is low cost. Countries with a lot of hydropower like Norway have high renewables but low prices. What we can’t find though is a single country with high wind and solar generation that also has cheap electricity.

The Nobel Peace Prize leads to the Nobel Price Price.

Read on to find out (some) of why Australia is such an odd fish.

It’s not just renewables in Australia, the National Electricity Market is a bureaucratic nightmare

Something very seismic has happened to our electricity prices. Despite 76% of our total mix coming from inexpensive coal generation, and only 10% or less coming from intermittent renewables, our prices have doubled. As Judith Sloan says, our NEM “is complete madness”: (The Australian)

The NEM operates one of the world’s longest interconnected power system. It covers a total distance of about 5000km from Port Douglas in Queensland to Port Lincoln in South Australia, with 40,000km of transmission lines.

But herein lies one of the NEM’s weaknesses: it is a very long, weakly connected system which does not provide the ideal underlying conditions for the ­efficient and transparent operation of the market for electricity. The penetration of renewables, as well as their preferential access to the NEM, has made this weakness even more apparent.

The NEM is not a free market, it’s so over-regulated with state and federal layers and counter committees to undo or outdo each other that any normal price signal is lost.

The market used to have a reliable supply with intermittent demand, now both sides of that equation are volatile. The forced uptake of intermittent renewables must surely make the whole system a much more complex beast, and the generators are gaming that volatility. In this case, even the Queensland government is in on the act:

The Queensland government is also attempting to destroy the NEM by instructing one of its generators, but not the other, to bid low at peak times. Mind you, that government has been more than happy to reap the excessive dividends produced by the gaming of the system by these generators.

The customers get screwed by everyone in this:

Some of the bigger [private] players are behaving in duplicitous and self-serving ways, the most egregious example being AGL. All that marketing tosh about being committed to renewables while coal and gas make up 93 per cent of its output of electricity.

The other problem is complexity and customers being unwilling to shift

The big corporates are offering big discounts to get customers to switch then quietly raising the charges a couple of years later. (AFR)

“…big retailers are content to let customers slip off the deep discounts they attracted them with after a year or two, and onto a costly standing offer or a much smaller discount.

AGL Energy chief executive Andy Vesey admitted last year that big power companies were guilty of punishing their most loyal customers in this way, but said subsequently AGL was abandoning the practice.

Mr Mountain said power bills are constructed in such a complex way that ordinary customers without sophisticated spreadsheet and analytical skills have little hope of analysing competing offers to work out which offers them the best deal.

Private comparison websites do not include all market offers and charge retailers for switching customers, while the websites offered by the Australian Energy Regulator and the Victorian government do not provide the tools customers need to discriminate among offers.

There is no free market for electricity in Australia. If a group just built a coal fired plant and lined up free and consenting customers willing to pay  for 100% fossil fuel based electrons, it would be breaking the law. If customers can buy “clean energy” why can’t they choose “fertilizing energy”?