Thanks to CFACT I was lucky enough to get to see Al Gore in Melbourne yesterday (and even luckier to see Climate Hustle the night before and meet some great people!). Gore wanted everyone to spread the word, but banned anyone recording him. (The staff actively patrolled for wayward cameras. We’d love to have helped share Gore’s message, but we would have been kicked out for doing so).

The intrepid Marc Morano even managed to meet Al in an inconvenient encounter: 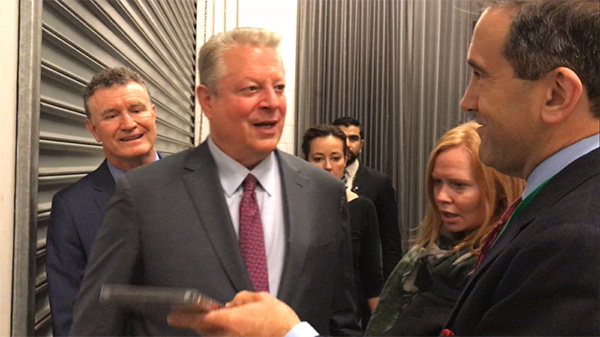 Marc Morano kindly offered Al Gore a copy of Climate Hustle, (which might have helped him feel a lot better about the future). Gore refused to take it. Possibly, he’s not that interested in climate change.

What I saw was nearly a whole hour of primal weather-porn – gratuitous, non-stop, scenes from the apocalypse,  glowing clouds boiled about incandescent forests, and giant drains in the sky emptied massive clouds in a flash. Glaciers crumbled before our eyes.  Poor victims were stuck in boiling tar on hot roads, they crawled out of mud slides, and were dragged in spectacular rescues from cars being swallowed by turbulent floods. Biblical is the word.

Gullible, naïve devotees gushed, awed, and murmured collective fear as Al spun a story of record doom and disaster with a google hit-list of extreme weather snaps. Al offered almost no graphs, long term data, or paleostudies. Few in the audience seemed to realize it was just a grab bag of the latest disaster-fest, and if a million people had had mobile phones in 10,000BC, the footage from then might have looked exactly the same or even worse, as Gore milked pretty much every weather event in the news to sell the salvation of renewables.  Few seemed to wonder how Gore could know that floods were not worse in 1598, or that droughts were not longer and nastier in, say, 1174, or during the summer of 2 million BC. But the all-seeing, all-knowing Al knew.

Through tricky double-negative convoluted sentences Al effectively sends the message that fossil fuels cause extreme weather (but whatever you do, don’t quote him):

Scientists used to say you cannot attribute any single extreme weather event to the climate crisis. But you have to say the odds of extremes increase, but now they are saying it very differently …

If you have a complex system causing a lot of consequences and you radically change it, every one of the consequences is different. With all this extra water vapour in the sky and all the extra heat energy in the atmosphere, every storm is different now.

And they are making advances in how much to attribute to the  climate crisis but increasingly more of it is directly contributed.

This is what the reinsurance industry measures with climate related extreme weather events. The only plausible explanation of course is the climate crisis.   —

— Al Gore in Melbourne  (That’s the full transcript thanks to Tony Thomas writer for Quadrant.org.au, who must be a whizz at live-shorthand.)

Following in the footsteps of a million years of witchdoctors, the message was that the weather is worse than ever and he know how to stop it. His only effort to scientifically connect those dots was to quote a few scientists opinions, while ignoring thousands of others, most historical accounts and 2 billion years of paleohistory. Cherry-picked extremes.

The long tenous chain of cause and effect was glossed over repeatedly with handwaving. The system was the most complex on earth, yet somehow scientists know what causes what. The chain of influence goes like this: fossil fuels make CO2, CO2 makes heat, heat causes droughts and more humidity, which in turn causes floods, intense rain, nastier storms, stickier roads, sliding mud, rising seas, etc etc blah-de-blah.

Has there ever been a year on Earth when there wasn’t a drought somewhere and a flood somewhere else?  This is a never ending game for Gore. Until we get perfect weather on Earth, on all 150 million square kilometers terra firma, he will always be able to say “boo”.

This video was typical of the scientific depth — “drowning dogs can be saved”:

I think the message here is that if you use petrol you cause women and dogs to be trapped in sinking cars.

If only she had driven a hybrid.

Roads are melting in India!

NDTV shows a video where this man’s shoes stick to the hot road and fall off. (Watch the video at the link). Call me a skeptic. I’ve bounded across searing bitumen roads here in Australia, and this man is not behaving as if the pavement is blisteringly hot. Would you put your hand down?

Note the “Highlights” in the NDTV story: “Tar on roads melts in Valsad, Gujarat, temperature was only 36 degrees”. 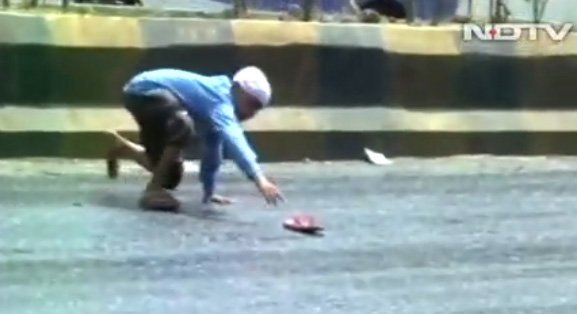 Most likely the melting roads are due to sloppy road construction and cheap materials instead of our fossil fuel emissions. Tar was melting at just 40C in India, according to the Times of India, due to “improper mixing of bituminous” materials.

“According to the UK-based Road Surfaces Treatment Association, most roads will start melting at a temperature of 50 degrees celsius. Roads in the United Arab Emirates are made of special “polymer modified binders“ which keep them solid up until around 80 degrees celsius.”

Watch as floods wash away cars in Spain!

Gore has a talent for finding spectacular footage and uses it to argue for renewable power (because mudslides are not about building codes or land management, and preindustrial mudslides were much nicer, right.)

Remember one piece of extreme-weather he couldn’t get? Gore asked for the Firenado footage of a mini-tornado sucking up a bushfire, but photographer Chris Tangney wouldn’t give him a licence to use it. Thank you Chris.

There was a spirit of salvation.

All ye peasants gather hither, for ye are the leaders, the chosen ones who see the light, only you can save the poor and downtrodden from the evils of fossil fuels. Unless we build enough windfarms we will never stop mudslides. Hail for a mudslide-free-future!

Your house will be washed away, unless you give up air-conditioning.

Gore had so many images, the onslaught ran at subliminal pace. He spoke of storm surges north of Sydney. I’m pretty sure I saw the infamous lost swimming pool at Collaroy. 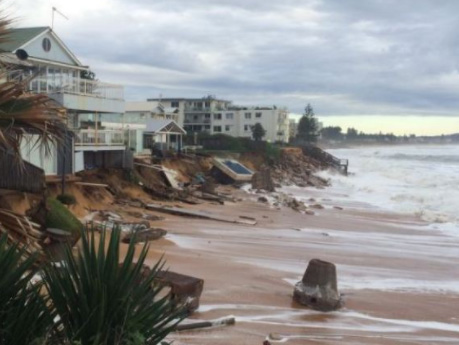 The speech finished by telling the world how renewables are cheap, competitive, and are taking over, which, if it were true, pretty much neutralizes the need for Al to do these tours, right? And who need subsidies.

Gore made much of closing coal fired stations, but unlike yours truly who showed the same maps, Gore didn’t show the massive number of new coal stations to his audience. The lies by omission tell you all you need to know about his interest in the climate.

Gore argues that renewables creates jobs, but Jo asks whether we want our electricity grids to provide electricity instead. If the aim was “jobs” first, we would create more if we shut down all the renewables, let industry “go wild” with cheap electricity and then use the savings to bury bottles of cash for the unemployed to dig up.