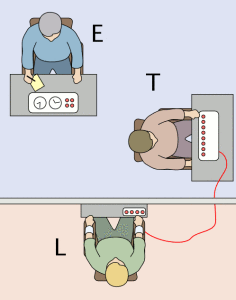 The chilling Milgram experiments have been replicated, and yet again, 9 out of 10 are willing to inflict electric shocks and pain on another person. In these infamous experiments the power of a white lab coat was enough to get more than half the participants (26 out of 40) to deliver a fatal shock (the participants didn’t realize the shock was faked, and the victim an actor).

This willingness to obey authority is both a great strength of humanity when authority is worthy and yet leads to the darkest abyss when it is not.

By nature, we are largely empathetic creatures: most people really don’t want to cause pain, they get quite upset themselves in the process. Yet many people will override this inbuilt ethical wiring if a person in a position of authority insist they do. It’s time we talked about ways to train people to resist. There is hope as outlined below in a different study from last year.

Press Release: The title is direct, “Would you deliver an electric shock in 2015?” and the answer, according to the results of this replication study, is yes. Social psychologists from SWPS University of Social Sciences and Humanities in Poland replicated a modern version of the Milgram experiment and found results similar to studies conducted 50 years earlier.The research appears in the journal Social Psychological and Personality Science.

“Our objective was to examine how high a level of obedience we would encounter among residents of Poland,” write the authors. “It should be emphasized that tests in the Milgram paradigm have never been conducted in Central Europe. The unique history of the countries in the region made the issue of obedience towards authority seem exceptionally interesting to us.”

For those unfamiliar with the Milgram experiment, it tested people’s willingness to deliverer electric shocks to another person when encouraged by an experimenter. While no shocks were actually delivered in any of the experiments, the participants believed them to be real. The Milgram experiments demonstrated that under certain conditions of pressure from authority, people are willing to carry out commands even when it may harm someone else.

“Upon learning about Milgram’s experiments, a vast majority of people claim that ‘I would never behave in such a manner,’ says Tomasz Grzyb, a social psychologist involved in the research. “Our study has, yet again, illustrated the tremendous power of the situation the subjects are confronted with and how easily they can agree to things which they find unpleasant.”

While ethical considerations prevented a full replication of the experiments, researchers created a similar set-up with lower “shock” levels to test the level of obedience of participants.

The researchers recruited 80 participants (40 men and 40 women), with an age range from 18 to 69, for the study. Participants had up to 10 buttons to press, each a higher “shock” level. The results show that the level of participants’ obedience towards instructions is similarly high to that of the original Milgram studies.

They found that 90% of the people were willing to go to the highest level in the experiment. In terms of differences between peoples willingness to deliver shock to a man versus a woman, “It is worth remarking,” write the authors, “that although the number of people refusing to carry out the commands of the experimenter was three times greater when the student [the person receiving the “shock”] was a woman, the small sample size does not allow us to draw strong conclusions.”

In terms of how society has changed, Grzyb notes, “half a century after Milgram’s original research into obedience to authority, a striking majority of subjects are still willing to electrocute a helpless individual.”

The good news from a study last year: Matthew Hollander listened to all the Millgram recordings again, and there were about 800 in the full set. He found that even among obedient people there were signs of resistance as the experiment got more painful. They had ways of slowing the experiment, tried to talk their way out of it, and talk to the victim too. The difference was that the disobedient people were more aggressive about slowing things down, they started to resist earlier, and had more options to resist. It would seem likely that if we train people better, a lot more people will stand up to authority.

“Before examining these recordings, I [Hollander] was imagining some really aggressive ways of stopping the experiment — trying to open the door where the ‘learner’ is locked in, yelling at the experimenter, trying to leave,” Hollander says. “What I found was there are many ways to try to stop the experiment, but they’re less aggressive.”

Interestingly, all six of the resistive actions were put to use by obedient and disobedient participants.

“What this shows is that even those who were ultimately compliant or obedient had practices for resisting the invocation of the experimenter’s authority,” says Douglas Maynard, a UW-Madison sociology professor who leads the Garfinkel Laboratory for Ethnomethodology and Conversation Analysis. “It wasn’t like they automatically caved in. They really worked to counter what was coming at them. It wasn’t a blind kind of obedience.”

If people could be trained to tap practices for resistance like those outlined in Hollander’s analysis, they may be better equipped to stand up to an illegal, unethical or inappropriate order from a superior. And not just in extreme situations, according to Maynard.

Though the numbers do still look depressing. There are critics of the Millgram experiments, who say that it was an artificial setting, unethical, and people wouldn’t react that way, but this second round of research has replicated at least some of those findings.

There is a kind of Millgram experiment going on in climate science. The experimenters keep pushing more ridiculous buttons…