We are ramping up the end of this series because we’ve been informed that both of David’s papers will be published in October — one on the error in the climate models and one on the notch delay solar theory.

There are emphatic (and ignorant) claims that David’s predictions have failed, and a flaw was found — both are wrong. After all that fuss and pointless flamewars, his prediction remains almost exactly the same as it was in 2014. It is still untested. It is a strange coincidence of timing that the theory is up for a critical trial so definitively, so soon, but there it is. The fall in solar radiation that happened in 2004 is one of the three largest in 400 years. We are waiting to see if that will have an effect, after the expected delay of one sunspot cycle. For a real scientist there is no shame in putting an idea up on the chopping block. Hypothesize, test, and observe. As David says: “If the predicted cooling does not eventuate then the notch-delay hypothesis is false.” Without real predictions, it’s not real science.

But prediction is a risky business. There are so many ways things can go wrong, and we’ve had pleas from wise souls warning David not to put out an exact number and date. But he has always gone with the numbers, unemotionally shifting gears as the data swung. (I’ve seen him once coolly drop 18 months of work entirely when new information came in.) From the start, he has said that if the cooling doesn’t happen by 2022 then something is very wrong with the hypothesis. If the delay between solar TSI (as measured by PMOD) is really a half solar cycle, then some cooling effect should be visible soon — it will most likely start in 2017, but it may take ’til 2022 (it’s a technical thing — depending on whether the step function was “causal” as opposed to “non-causal”, see below). Of course, El Ninos or other natural variations may cloud the signal. If a volcano erupts, or a La Nina kicks in, it will take longer to filter the noise.

For the sake of the public “debate” notice that the fall in solar radiation (TSI) is a fall in smoothed data — averaged over 11 years. We expect Leif Svalgaard to continue to deny there was a fall. He’s talking about his data, and ignoring the smoothing. David discusses the different datasets below.

David’s overarching prediction is that the 2020s will be no warmer than the 1980s, which should kill off the carbon dioxide theory of global warming.

In the end, we’re only talking of ~0.3 °C of cooling, which is significant on a global scale, but not something you’ll notice in the garden at home.

I am perhaps even more jaded than David — with homogenization and adjustment of data, I am not convinced that 0.3°C changes will show up amongst the man-made noise in some datasets. The past keeps shifting. But that, as we all know, is another story.  — Jo

This post predicts an upcoming global cooling, based on the large fall in underlying total solar irradiation (TSI) in 2004 and either of the notch-delay hypotheses (Force X, or Force ND). If the hypothesis is right, sustained and significant cooling of about 0.3 °C will begin in around 2017, one sunspot cycle after the 11-year smoothed fall around 2004 (=2004+13), or for various technical reasons, possibly up to five years after that.

Some caveats: there is no satisfactory instrument for measuring TSI even today; much TSI “data” and all TSI before 1979 is based on reconstruction via questionable models; it is not known which solar parameter is best for predicting force X/D in ~11 years and it might not be TSI; the observations of a delay in post 22 are based on a variety of TSI measures; and of course Yogi Berra’s oldie-but-goodie “it’s tough to make predictions, especially about the future.”

The Recent Fall in TSI

A composite TSI was constructed by combining all of the sources of TSI mentioned in post 21, so it relies mainly on PMOD and Lean’s reconstruction with the background correction of Wang, Lean, and Sheeley. It is shown in Fig. 1 to give historical perspective: the recent fall in TSI starting around 2004 is one of the three largest falls in TSI ever recorded, with records from 1610. It is almost the same magnitude as the fall from 1610 to 1645 that led to the Maunder Minimum and the depth of the Little Ice Age, or the fall from 1795 to 1810 that led to the Dalton Minimum. 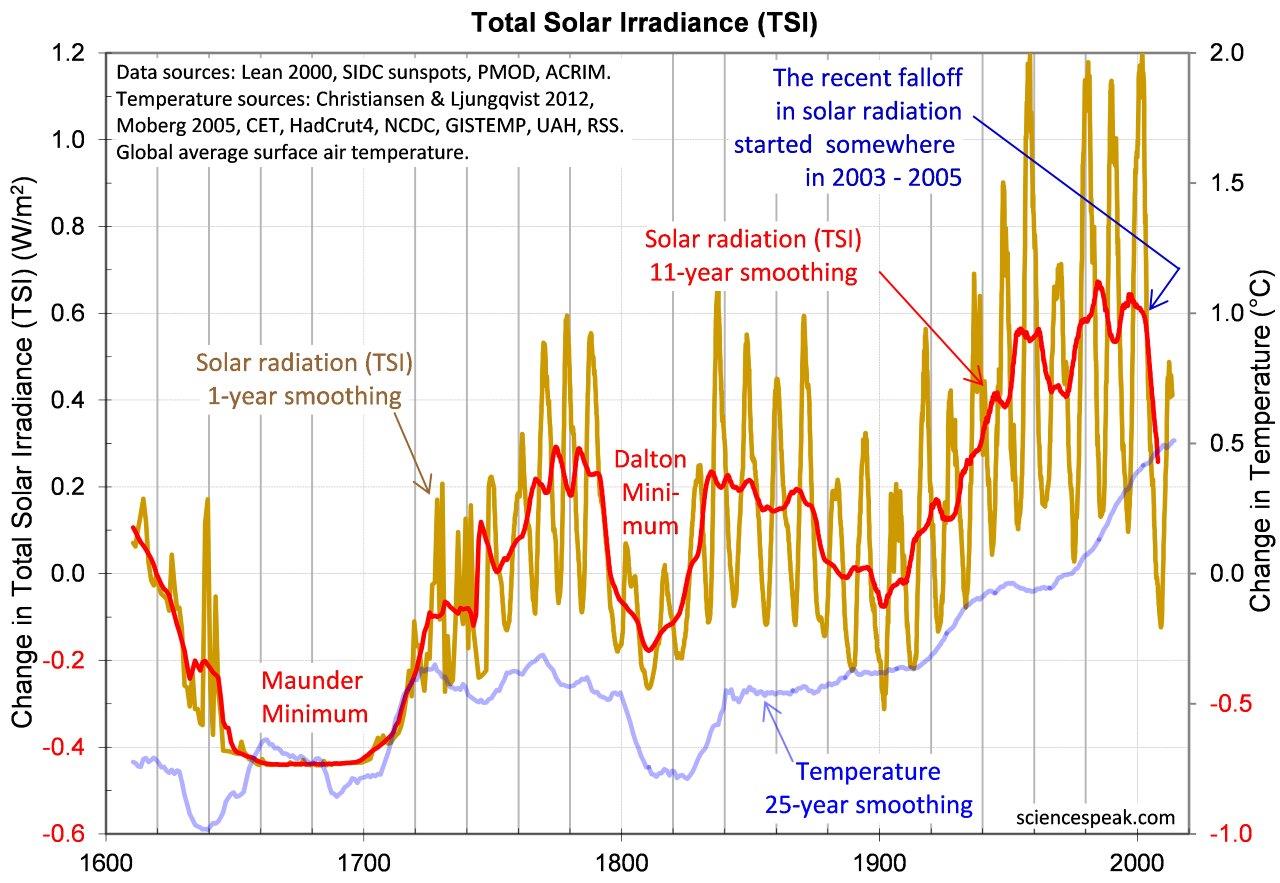 Figure 1: Composite TSI and composite temperature since 1610. The recent fall in TSI is the one of the three largest and steepest on record.

Here is a closer view of the recent fall, with sunspots and several measures of TSI, including PMOD/Lean’s reconstruction, our composite TSI, and recent reconstructions: 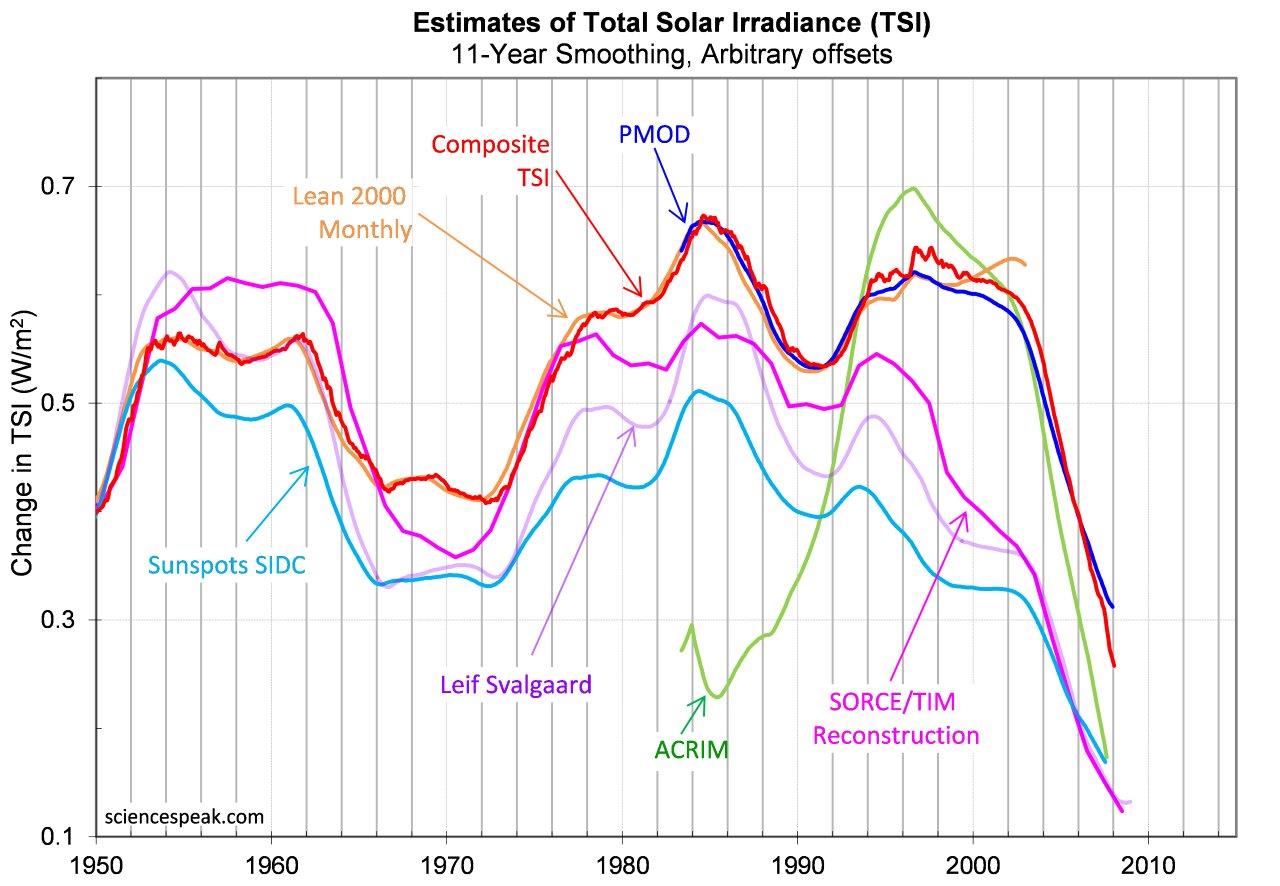 Figure 2: Various measures of sunspots or TSI, all 11 year-smoothed (averaged over a centered 11-year window, to eliminate the effect of an 11-year cycle). The TIM is the latest instrument for measuring TSI, but only started in Jan. 2003, too late to cast smoothed light on 2004. The SORCE/TIM reconstruction by Kirvova is preferred by the IPCC in AR5, and the reconstruction from Leif Svalgaard in mid 2014 is similar.

If the more recent TSI reconstructions such as SORCE/TIM are the better predictor of force X/D, then force X/D has been falling in response to a slide in TSI beginning ~1995, which accelerated from ~2004. The total fall in underlying TSI is ~0.4 W m−2, suggesting an associated long-term surface cooling of ~0.7 °C and cooling after 20 years of ~0.4 °C.

The fall in underlying TSI around 2004 has been noted elsewhere by different methods. For example, Herrera, Mendoza, and Herrera (2014, [1]) deduce that a grand minimum in solar activity began in 2004 (using PMOD data) or 2002 (ACRIM data).

The current solar cycle looks to be ~13 years long, suggesting the delay from change in TSI to corresponding change in force X is most likely ~13 years.

If the notch is best modeled with the non-causal step responses, the cooling will start about one sunspot cycle after the TSI fall. But if the causal notch step responses are more appropriate, most of the cooling impact might not begin until up to another ~5 years after that (for technical reasons to do with the step response, next post). At the stage we do not know which notch model most resembles reality.

The fall in force X and surface temperatures corresponding to the fall in TSI that started around 2004 will most likely start sometime around 2017 (=2004+13), or up to five years after that.

If the PMOD TSI is the better predictor of force X/D (more likely):

Global temperatures should come off the current plateau into a sustained and significant cooling starting sometime from 2017 to 2021. The cooling will be about 0.3 °C in the medium term (the 2020s), taking the planet back to the global temperature that prevailed in the 1980s.

If the SORCE/TIM reconstructed TSI is the better predictor of force X/D (less likely):

There has been mild global cooling due to force X/D starting sometime from 2008 (=1995+13) to 2012, and it will accelerate from sometime in 2017 to 2021. The total medium-term cooling (the 2020s) will be about 0.4 °C. However there has been no mild cooling since 2008 to 2012, so either the SORCE/TIM reconstruction is inappropriate or the notch delay hypotheses are wrong (in which case there is no prediction), or that mild cooling was counteracted by warming from extra CO2 (in which case there will be mild cooling starting sometime from 2017 to 2021, as the fall in force X accelerates).

The notch-delay hypothesis predicts sustained and significant global cooling starting sometime from 2017 to 2022, of ~0.3 °C but perhaps milder.

If the predicted cooling does not eventuate then the notch-delay hypothesis is false.