“PHOTO: The low-lying islands of the Pacific are on the frontline of the fight against climate change. (ABC News: Chris Uhlmann)“ 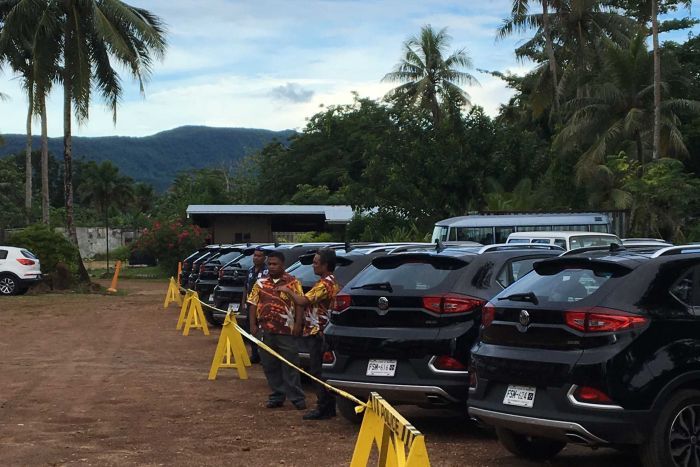 PHOTO: The low-lying islands of the Pacific are on the frontline of the fight against climate change. (ABC News: Chris Uhlmann)

It seems an expensive way to stop tsunami’s.

Still, if you have to run for the not so low-lying hills in the background, perhaps the shiny black sea-walls might  still be useful.

But this is what it’s all about. Pacific Islanders play the game, speak the fear, and admonish those who don’t buy them enough goodies. The Chinese heroes offer nice cars and a sports centre. (That’ll really slow the seas and save the corals).

Turnbull turns up to give away $80 million extra dollars of other people’s money, the islanders seem happy, and he is nearly sorta forgiven by the ABC.

It’s hard not to be afraid of climate change when you get free cars.

Nearby stood a shiny new fleet of MG SUVs, gifted by China to Micronesia to ferry about the leaders and assorted dignitaries from the forum’s 16 countries.

Established in 1971, the Pacific Islands Forum’s leaders’ summit brings together members for political discussions on deeper regional cooperation and integration.

The first day of the forum was held in a vast hall attached to a basketball court.

A painting on the outside of the stadium blends the Chinese and Micronesian flags and a fading plaque beneath declares that this “friendship sports centre” was financed by the People’s Republic of China.

The early signs from Malcolm Turnbull are good. He turned up with an additional $80 million for climate mitigation in the Pacific and said that he was committed to action on global warming.

One old Pacific hand said that Australia could still win hearts and minds in the region, in spite of the growing influence of Chinese soft power.

Have we paid enough yet? It’s never enough…